"It's showtime, girls!"
Is this really happening? Am I starting up yet another Final Fantasy walkthrough? Apparently so. After the rousing success of my Final Fantasy X (your mileage may vary), it's time to take on the sequel, Final Fantasy X-2, the first sequel in the franchise. It was certainly a bold move; one with mixed results, but one that I feel achieved what it wanted to. My name is Apoqliphoth, and I'll be your guide today.

As I'll be playing through the HD Remaster version, I'll be including guides to the Creature Creator/Fiend Arena, bonus dresspheres and other added hoohah. If you're playing anything other than the western PS2 copy of X-2, I'm your man. GameFAQs doesn't have nice pictures with witty captions, after all.

Something I feel needs pointing out: If you're a guy, don't be ashamed to enjoy this game. Sure you'll look like a closet pervert who's too afraid to go the whole hog and watch anime, but it's a Final Fantasy game and there are still cool male characters for you to pretend you can relate to.

Just don't keep the Spherechange sequences on while your friends and family are in the room. Trying to explain just makes it worse. Tell them "I'm playing it for the storyline". They'll never know any better. It's funny because this game is entirely sidequests

In stark contrast to its predecessor, Final Fantasy X-2 focuses on completing missions and interacting with the denizens of Spira. It works in context - Spira is enjoying the Eternal Calm, and the game wants to reflect that by encouraging you to see the sights and meet the people, solving small local problems and contributing to its continued peace.

This is shown by a Completion score, which tracks how much of the game's main quest and side missions you've completed. Most of the game's unlockable content comes from said missions, so it's in your best interest to attempt as many as possible. Unfortunately, several sidequests are permanently missable and/or difficult to trigger, so a walkthrough is almost mandatory for 100% completion. But don't worry huskies; I'm here for you.

Spheres, grids...I guess Spira couldn't let some things go. Two years after the events of X, they've evolved into Dresspheres and the Garment Grid, respectively. Basically, consider Dresspheres to be the equivalent of Jobs from Final Fantasy III and V. By changing Dresspheres, your character changes into the outfit of that particular Job class, gaining their stat parameters and abilities.

The Garment Grids are boards with nodes into which Dresspheres can be placed. In battle, a character can change from their current Dressphere into another Dressphere in an adjacent node, allowing players to quickly and efficiently (if the transition animations are turned off) change jobs in the middle of battle to suit the situation. One of your characters took a big hit and is now circling the drain? Change someone into the White Mage Dressphere and heal them up. Facing an enemy with high physical Defence? Assume the clothing of a Warrior and hit the enemy with Armor Break.

There are a variety of different Garment Grids in the game, many of which contain bonuses that are applied to any characters whose Dressphere is placed within. If you look at the picture, you'll see "Defense, Magic Defense +5". Any character using a Dressphere placed in one of its nodes (the black circles) with have their Defence and Magic Defence increased by 5 for as long as they're using that grid. The coloured circles, or 'gates', apply temporary effects to any character who 'passes through them' - changing between Dresspheres moves the character around the grid, picking up any bonuses from gates through which they've moved.

For example, if Yuna is using a Gunner Dressphere placed in the northern node of the grid shown in the picture, and the Black Mage Dressphere is placed in the eastern node, if Yuna changes from Gunner to Black Mage during battle she'll pass through the northeastern red gate, which further increases her Defence and Magic Defence by 5 for the duration of that battle. It might seem odd now, but you'll pick it up very quickly.

Unlike Final Fantasy X, which let's face it had the best battle system in the entire series, X-2 goes back to a more traditional ATB (Active Time Battle) system. Your turn gauges charge up based on your relative speed; when they're full you can input commands. Also making a welcome (?) return is the concept of charge times - more complex actions like powerful magic and technical skills take longer to prepare than simpler actions like normal attacks.

The tradeoff is that while battles are less tactical than they were in X, they're faster and more exciting, with players being able to chain attacks together if coordinated correctly for extra damage. I'm sure there are endless debates online about which game has it better. My vote is for X, but only because I like not having to race the enemies to reach healing commands in time. Okay, and because X had that phenominally useful turn order display thing. Shit was fire.

How do you condense all seven of Final Fantasy X's characters' personalities into three people? This is how. 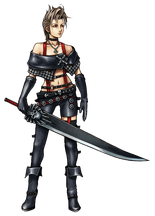 Gone is Overkill from Final Fantasy X; enter Oversoul (as many of your fiendish foes will do over the course of the game). If you defeat enough fiends of a specific family (Bird, Lupine, Element etc.), the next one you encounter will Oversoul, turning into a powered-up version of that enemy with new abilities and fully restored HP/MP, offering more EXP/AP/Gil as well as different steals and drops.

Some Oversoul transformations are fairly subdued (most early enemies), while others are downright beastly (Tonberry and Amorphous Gel for example). Certain types of enemies, humans for example, cannot be Oversouled. But kill the rest, because you'll be rewarded later on. It's a nice optional challenge, too.

As a side note, Oversouled fiends' new abilities are often somewhat...experimental, doing strange things like destroying your items or Gil stash, and having rather flavoursome names.