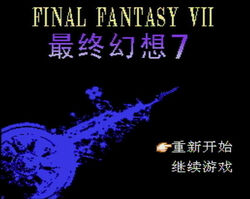 Final Fantasy VII, in my opinion, was an overrated game. Nowadays, graphics-wise, nobody would play a game with crappy pixelated polygons. It was a great game when I played it, but isn't that enough? Instead, huge fanbases grew on this specific game, and Square-Enix had to fan the flames of fangirl/fanboy-ism by releasing sequels and prequels of this game, heck, even a movie! Hello everyone, I'm Chocolancer, and I'm here to host you a real gem of a walkthrough for an obscure Chinese pirate remake of an overrated game, sold under Final Fantasy VII: Advent Children, called 最终幻想7.

Created by the anonymous programmers of Shenzhen Nanjing Technology Co. Ltd. (they have a site, but it's fraudulently 'legitimate', and written in Chinese), the tone-down remake was revolutionary to be fit into a 3 megabyte cartridge. Of course most of the elements of the game are ripped off of Final Fantasy II and Final Fantasy III, but the whole thing is a novelty unto itself. It being crammed into a 3 meg cart, with huge blocks of Chinese text and other space-hogging elements, many areas of the game have been omitted (which is a relief, because we don't want to have to go into that...). The game's worth a try, though the difficulty is atrocious...

Differences from the Original[]

There are a LOT of differences in this game compared to the original. Here's a list:

The controls are simple as NES controllers only have 2 buttons and a start & select button:

The battle system is similar to Final Fantasy II and III, it is generally turn-based. Red numbers are damage numbers and white numbers are restoring numbers. Enemy names are on the bottom right while the party names and HP are on the bottom left. Materia can be used over and over again for a set number of castings (see differences above) and gain levels the more they are used, when the bar of a specific spell reaches MAX, it can be brought to a magic shop to be "enchanced" (gain a level). The same goes with weapons, but you have to buy the armour pieces. The battle commands are pretty simple: Fight, Magic, Item, and Run. When a character gets killed/K.O.'ed, use a Phoenix on them. You can also switch Materia in battle. Just simply select it in the item menu and you'll swap it on that turn.

For menu, you can access the stats, magics, and equipment of each of your three characters. You can also choose to switch characters and save anytime. Stats are divided into five categories (Strength, Vitality, Intelligence, Spirit, and Agility). You can equip weapons, one Materia, and armour pieces in the Equip menu, and you can see Materia magic in the Magic menu. To see each character's stats, magics, or equipment, simply press the up or down/ left or right buttons.

Status effects? Hell, there are none here! Consider yourself lucky...

Check your emulator's input settings to check which buttons are which, different emulators have different input styles. I highly recommend Nestopia or NesterJ, as the ROM uses a unique mapper (#163) to support 16x16 Chinese fonts. If you don't like the slowness of this game, use the "Fast Forward/Alternative Speed" button (find it!) to speed up your progress, it really works for me. Having a Fast Forward emulation command helps a LOT in this game if you're extremely impatient...

How to Beat the Game[]

Speaking of music, there's quite a few of them so I'll list them out because those'll be the only one's you'll hear in the game...deal with it. All of the music is a slower, tinnier, grating rendition of the original, which I suppose makes it more....original?