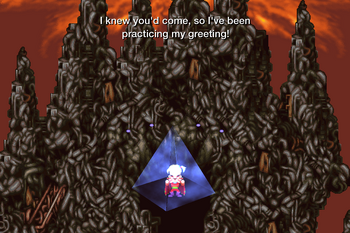 Take Company 1 down to the balcony, then take the newly spawned right door. Advance north through the factory until you come to a room that is part factory and part palace. A Palactory. Run up the red carpet to meet with the third and final of the Warring Triad.

We get the legendary Excalibur for winning, a hugely powerful blade that far outranks the weapons we received from Fiend and Demon. Now that all three Gods of magic have been killed, the way to Kefka stands open. The party inelegantly tells you via fourth-wall telepathy that Kefka has drained the statues of their mystical power, making himself the God of Magic. Save at the flashing light that has appeared, and walk up through the doors to the switch on the floor. Switch back to Party 3, and have them walk forward to step on their switch as well. Now for party 2, in the centre. Save at the save point, but don't yet jump down the hole leading to the final switch. Here is where we prepare for the Final Boss.

Once the final team steps on their respective square, a long cutscene will commence in which we meet with Kefka for the first time since the Floating Continent incident. Afterwards, the battle will begin immediately, which means we have no time to equip everyone. The first thing I must mention is the last clash is fought in four stages, with Lord Kefka being the closing fight. After one phase is completed, every person who has been knocked out will be removed from the front line, to be replaced by a fifth, sixth, or even seventh party member (at least one person needs to survive, obviously, or you'll get the usual Game Over screen). The person is decided by you - just before the battle begins, you get to place everyone in order from 1-12. Choose wisely: You'll want your best warriors and mages forming the vanguard, and each person after that ought to be assembled in order of usefulness. Hopefully, no one will die, but you should prepare for the worst to happen in case it does. My motto: Something always goes wrong.

Everyone needs to be equipped. Everyone. Even number 12, who probably won't see the fight at all, must be given the best equipment left over in case he's miraculously called on for the last fight. Pity that he gets such terrible leftovers. You don't need to equip espers, since there's no AP to be gained up here, but you can whack 'em on if they make up a small part of your battle plan. Locke has to be in your first team of four. That's a rule. Every aspect of the first two battles has an Elixir to steal, and the third battle has two enemies, one with an Ultima Weapon to take, and the other with the Ragnarok - that weapon that we passed up back in Narshe for the more useful Ragnarok esper. The last one has a Megalixir to steal, too. Make sure that Locke survives until then. Actually, lets make that a rule besides. Locke must survive. Every battle, make Locke's life your prime concern. He should also have the Thief's Bracer on, while I'm still on it.

Once you decide who will get to go first, (and you can decide whoever you want) give them all their equipment based on the roster. When everything's ready, save again, step into the space, and walk on the switch.

The God of Magic Edit 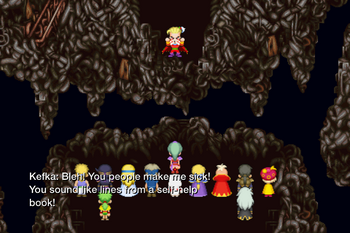 Three green tractor beams lift the parties up to the pinnacle of Kefka's titular tower.The man of the hour greets us himself, appearing in a graphically delightful rotating square pyramid. Keffie lays his newfound omnipotence on thick with a few parlour tricks, telling us how we're all worthless pawns that are destined to be killed. Terra tells him that all life will end, but new life will be born in the interim, and the cycle can continue. Kefka, having lost all semblance of sanity, disagrees. He thinks that since everyone will die eventually anyway, he should just hurry them on their way to an inevitable death by destroying them with the Light of Judgment.

Terra argues a bit more, then everyone lends their voice to the cry of what it means to exist. Kefka's having none of that, makes one of the best lines in the game, and proceeds to fuck up the world of Ruin even more with his great ray of light, all with that satisfying theme of his playing in the background. After the scene, you get the opportunity to assemble your team of twelve. Remember to put Locke in the first four! After you hit confirm, the battle for the fate of the world (of Ruin) begins.

That does it! Surprisingly, the garrulous clown has nothing much to say when fading into nothingness. Isn't he at least somewhat happy that he's slipping into the same death that he's enjoyed inflicting on everyone the past year? Hm. Guess we'll never know. I like to think that his last words were: "At least I killed Gestahl!"

The great tower of rubble begins to collapse, (the two others that you didn't bring along show up, but they're not important enough to listed outside of parentheses) and the party makes a flat chat for the Falcon. Terra turns into an esper, but falls over. Clumsy bitch. The magicite we've used over all this time begins to crumble and fade into the wind, since Kefka was the God of magic, and since he's dead, all things magical have to die too. Terra's half esper, which complicates her position. Will she die as her summon-half does? Or will she remain in her human form? Correct answer: Human form, but with the esper form's choice of clothing.

The next few minutes of the ending involves everyone escaping the collapsing ruins of Kefka's testament to destruction. It shows every main character we've played as as they flee. It's kind of fun in a way, since people who have never interacted before get to talk to one another, like Cyan and Edgar, or Gogo and Celes. I'll spare you the details of what everyone does, #1 because I can't type that fast, and #2 because it just isn't that interesting. Shadow is worth talking about, however. If you did that Clyde + Baram sidequest from earlier, you'd know that Shadow is still feeling guilty over leaving his friend to die in unthinkable agony. I'd like to say who the fuck cares, but I guess Shadow cares more about 5 minute characters than I do. This is just dumb though: Unable to live with the knowledge that Baram died and he didn't, Shadow stays behind in the crumbling building as everyone leaves, presumably dying to reunite with his deceased pal. I know he feels bad, but he's got a daughter for fuck's sake. How'd ya think she will feel? I know I wasn't that kind to her in the walkthrough, but she deserves better than just Strago, damn it! At least Interceptor lives. I'll drink to that.

Guess who the last player is? YOU. Yep, YOU. Mmhm, my skills as a walkthrough writer really came in handy back in that tower, I must say.

The group escapes, and elsewhere in Mobliz, Katarin gives birth. The knocked up teenager? Yeah, that one. Everyone wakes up on the Falcon (when were they knocked out?) and they discover Terra alive in her human form, having been able to connect herself with the children of Mobliz with their love and devotion. Poorly written... but I guess I'll just look the other way for now. I do a lot of that, huh? I think it would have been better if Terra had a genuine love interest though, like Setzer. It's not like Darill's coming back anytime soon, and they're of an age, so why the hell not? Terra Gabbiani has a nice ring to it, wouldn't you say?

The credits play, but nothing exciting happens. The Falcon just flies over the sea with some seagulls gliding alongside it. This part just keeps going and going and going, but at least you have a 21 minute musical spectacular to listen to, courtesy of the man himself, Nobuo Uematsu. First Dancing Mad, now this? Very impressive.

Last thing to do is have everyone fly over their homelands to wrap up their respective stories. Terra waves to the children of Mobliz, where Katarin has given birth, Relm waves to the people of Thamasa, Locke to the people of Kohlingen, Sabin and Edgar to the people of Figaro (the castle, not the shitty town), and no one else does any waving because they have no homes, or their homes where destroyed. Did we have to end it on such a sad note?

More nature shots, more revisiting places that we've been too... and that does it. It's over. 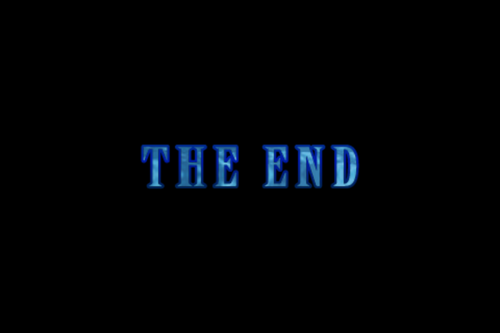 Hooray! The game is over! Ah - well, not quite. Save the cleared game data after the the end screen disappears, and you can play forward into the final part of the game: The Bonus Dungeon! See you there, everyone!

Retrieved from "https://finalfantasy.fandom.com/wiki/Walkthrough:Final_Fantasy_VI/CylindrusAltum/Part_XXXVI?oldid=3214627"
Community content is available under CC-BY-SA unless otherwise noted.