It's time to prepare our bodies for the tribulation that is Kefka's Tower, the final dungeon. We need to make ourselves ready for this, what with levelling up, acquiring some abilities and items last minute, and learning as many good spells as we can. You have every person to make the team of 14 now, and you should have explored every area yet covered in this walkthrough. That's a good start. For the final dungeon though, you need to use all but two of them, which means that the other dozen should be at a high enough level to fight off tough enemies with high HP and powerful attacks. The best place to level up is a place that we haven't actually been to yet, a breeding ground for mighty reptiles that Intangir himself would fear.

Take to the skies on the Falcon and fly to the forest east of Gau's dad's shack and west of Triangle Island. It actually looks like a dinosaur head if you squint your eyes so that you can't see shit properly. This forest is home to two types of enemies, both not lacking in EXP and AP and excellent prizes to drop or steal (but lacking in Gil: You'll need the Cactuars if you want more of that). There are only two enemies here; let's start with the easiest. Tyrannosaur has only 12,770 HP, but they're vicious bastards. Bite can hit for 2000+ alone, and Meteor does about 1000, but to everyone. The real problem is if you encounter two of them - they always pincer attack you, even with the Alarm Earring on, and can inflict massive damage on people when their backs are turned. Try your best to kill them immediately with Blizzaga spells (which they're weak against) and Master Scroll combos, and they should drop quickly. They have a Reed Cloak to steal and an Impartisan to use, but they're only useful on Imps, so ignore that. They give off a lot of EXP, however. It should come as no surprise that I'm telling you to save before you even enter this place. 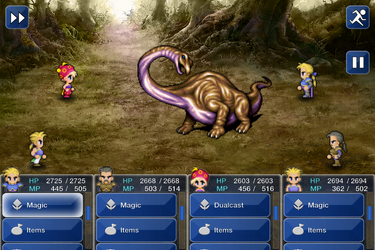 The other one, Brachiosaur, can only be fought on its own, but that doesn't make it any less threatening: on the contrary, its the hardest non-boss enemy in the game! Not only does it have 46,050 HP, but a myriad of only the most badass attacks: Meteor, Disaster (like Bad Breath on everyone - equip some Ribbons) and Snort to name a few. On its fourth turn it might even use the dreaded Ultima, which will absolutely kill everyone unless Celes is there to absorb it with runic. The idea is to kill it before that happens though. Like T-Rex before it, the Brachiosaur is weak against Ice magic, and thankfully it doesn't counter anything with a ridiculous attack that might kill the attacker. It has an easy way to be managed, though: Give a Fake Mustache to Relm, and have her control the Dino with it. So long as he's under Relm's spell, he can't fight back against you. Just cast all the Blizzagas and Ultimas in the world until he's killed. The EXP and AP is magnificent, but the best part is his drop: Move over Master's Scroll, The Celestriad is the new best relic in the game. It's like the Gold Hairpin in its execution, but lowers the cost of every spell to 1 MP. If that isn't overkill, I don't know what the fuck is. Try to get as many as you can without getting bored, since it's such a spectacular item to have.

Return to the Dragon's Neck[edit source]

We have plenty of items in our hands, which means we have much more to bet at the DNC! I'll try my best to incorporate every last detail here, because there is huge amount of stuff to touch on. For most of these matches, I'll be using my Fixed Dice+Master's Scroll combo with Setzer, since it's hard for any monster to contend with that. You can use any strategy you want, but don't blame me if you fail using a lesser tactic. First, the betting process that we've gone through before. Save before each fight:

Preparation for the Mages[edit source]

Terra, Relm, and Celes should have access to the following spells for the upcoming dungeon: Ultima, Flare, Hastega, Slowga, Quick, Arise, Reraise, Curaga, Holy, Firaga, Blizzaga, and Thundaga. These three will be our primary mages, and it's important that they have as many powerful spells under their belts as possible. Best training spot for them is the Maranda Desert, killing Cactuars and Slag Worms.

Thamasa's weapon store is the only place that sells Fuma Shurikens in the game. They cost 500 gil, but considering that you can earn 10,000 gil apiece from cactuses, this doesn't really sound all that troublesome, does it? It's only 49,500 overall, and they make Shadow a god in battle. Also stock up on Shurikens, while you're at it. They only cost 30 gil each, and they're good for throwing at creatures too weak to have the honour of getting a weapon as fabulous as the Fuma Shuriken embedded in their skulls.

There are plenty of monster with excellent rages out there on the Veldt. I'll tell you this again: If you plan to use Gau in the final dungeon, it's important that you get the Stray Cat rage. It doesn't sound that powerful, but it is. Other great rages are Io, Behemoth King, and Holy Dragon. Yeah, those last two are bosses! Imagine how powerful those'd be!

A last tally of the lores he can learn (excluding Aqua Breath, Revenge Blast and Stone), which enemy to get it from (typically the easiest to locate), and where to find the enemy in the World of Ruin:

* Can't access it until you storm the tower. ** Must Use Relm's Sketch *** Missable Lore

That took a lot of goddamn effort. Many that you don't have (and some that could've been found in the World of Balance) can only be secured in Kefka's Tower, and a handful of them require Relm's expertise in painting. Fiend is a boss enemy, and the only one to teach this lore, so if he dies without using it (or you don't have Strago in the party), then bye-bye Force Field. And take a look at Dark Force: what a Lore-whore he is. He can cast every blue magic spell in the game apart from Mighty Guard, Transfusion, Grand Delta, and Force Field (You need to Control or Sketch him to get him to use Tsunami, though). Potentially, you could learn almost every lore you want from him, you lazy, lazy, bastard.

Would I be incorrect in assuming that you haven't got to doing this tedious sidequest? I guess I understand, it isn't the most exciting part of the game or your training procedure, but it does make the final dungeon a hell of a lot easier to have it with you, since it has the highest defence in the game (ignoring the Tortoise Shield, which you shouldn't even own at this moment. Or ever. In fact, if you have one, toss it out - it's a poser) and absorbs Fire, Ice, Lightning and holy damage, while nullifying the other four.

If you do want this shield, here's the best way to do it: Fly to Solitary Island with any four people, and equip them as you will. Give one person the Cursed Shield, and strip them of all other items. Now go about killing the Peeper on the island, as they're weak monsters who die in one hit, or die of their own accord from some auto-sap thing they have going on. After 256 battles with the shield equipped, the curse will be lifted, and you will have your Paladin Shield. It will take at least an hour to accomplish, but all truly wonderful things come at a cost, don't they? Let me put it this way: It's no Yiazmat, right?

I think that's everything worth mentioning. Once you think everyone's strong enough and learnt enough magic, it's time to assail the mad mage's tower. 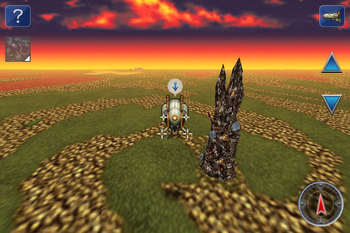