With the Cultist's Tower completed, all the optional locations in the World of Ruin have been cleared. Now we only have a few more elective chores to do before taking on Kefka in his tower of rubble.

I find that the Cactuars of the Maranda desert are the best monsters to train with, so ideally we should remove the malevolent presence that exists there so that all our party members can gain plenty of EXP and AP without fear of being charged by a huge killer cactus. Head to Maranda, turn left on entering, and speak to the blonde thief standing by himself. This triggers the Gigantuar quest to begin. Head out into the desert and kill 10 Cactuars (I've told you about this before) now, and the Gigantuar will be roused from his slumber by the smell of his family's blood on the air. Save after that tenth Cactuar dies. Now whenever you walk around here, you may find more Cactuars, more Slagworms, or possibly the main guy himself. After those ten are dead, Gigantuar will occupy a single space in the desert. Travel over every yellow square in order to flush him out:

Look, Cactuar Magicite! The summon is capable of hitting for 9999 damage, but is unreliable. It teaches Teleport, Vanish and Hastega at high rates, so its overall a poor summon. The only good thing about it is that boost of Speed +2 it gets at level up.

Our next summon can be found swimming around in the straits between South Figaro and Nikeah. Here's your only chance to get Mog's Water Harmony Dance if you didn't get it in the World of Balance, so bring him if you need it. Once the esper's dead, it's gone forever. You can also bring Strago along to learn Tsunami, a lore, but there are other sources present that allow him to learn that.

Fly to South Figaro, walk south a little bit, and speak to the pony-tailed gentleman gazing into the trees. He tells you about a huge shadow that passed 'neath the water when he was out fishing. Head to the docks and equip your team with Force Shields, Force Armour, Minerva Bustiers, and anything else that can resist water attacks. Ask the guy on the ship to be ferried to Nikeah. Along the way, the ship is attacked by a ferocious sea creature fresh from the Book of Job.

Our reward is the Leviathan magicite, as might be expected. It teaches Flood at a level of x2, which is excellent because we haven't been able to use water magic up until this point. He also give a stamina boost of +2 on level up, and stat uplifts are always nice. To get back to the Falcon, talk to the man on the docks and ask to be taken back to the other side.

Yes! Gilgamesh himself appears in the game to join our cause as an esper! Alleulia! Takes some time though, and it costs a lot of money that will end up in the hands of the proprietors of a particularly disreputable auction house...

Fly to Jidoor, enter the auction, and start the bidding process. When the Excalipoor is up for grabs, start bidding! It will cost you 500,000 gil to buy this shit weapon (which only inflicts 1 point of damage each turn), but it's necessary to recruit Gilgamesh to our side. If you don't have all that money, then you're going to have to kill a few cacti in the Maranda Desert before you save up enough. Remember, each Cactuar is worth 10,000 gil, so get cracking.

What are we supposed to do with this faulty sword? Fly over to the Dragon's Neck Coliseum and bet it for a better weapon, that's what. Once you arrive, saddle up a team of four (Setzer with Master Scroll+Fixed Dice, Sabin with Phantom Rush, Edgar with Chainsaw and Terra with Soul of Thamasa+Ultima would be unstoppable) and bet that sword. Choose one person to fight the enemy, an Onion Dasher, and confirm. After your weak opponent dies, you receive a Merit Award for your victory. Subsequently, a mysterious man appears and declares that he will take the sword for his own, thinking that it's the Holy Blade of Legend. Your three sidelined party members will jump to your defence in one of the best optional boss fights of the game.

We get the Genji Helm/Armour for winning, but more importantly, we get Gilgamesh as a summon! He does random stuff as a summon, but I'm not too concerned about that (since I doubt I'll ever call on him anyway) - Gilgamesh is just like Raiden in that he teaches Quick at x1 and boosts strength by +2 on level up, but he also teaches his own unique spell, Valor (Damn American spelling! GRRAH!), which is like Bravery, but it works for the whole team. The Merit Award we got earlier for beating the Onion Dasher is also beautiful: it's a relic that allows someone to equip any armour or weapon they want. Yeeaaahhh! Sabin with a paintbrush! Now that's what I want to see! Sadly, this makes Setzer a weak character again, since now any old character can equip his Fixed Dice now. Just for principle's sake, I'd still never give the dice to anyone except they're rightful owner.

Now that the final esper has been thrashed, it appears that we have the power required to take on the mad god himself and put an end to his reign of ineffectiveness where no one has actually died since the apocalypse. Actually, we're several times stronger than Kefka even at this point because of our weapons and relics, and my team's only averaging about level 40. This should be easy, but we still ought to prepare for the journey that's to come.

I don't have anywhere else to put this little sidequest, and I don't want to put it on the next page, which I've designated as a strict preparation guide, so here it goes.

At any time in the World of Balance or Ruin, you can view vignettes of Shadow's past as a man named Clyde, a criminal in partnership with Baram, a thief, and his only friend. There are five of these overall (six if you count the one you see if you let Shadow die), and they paint an evocative picture of the life Shadow once lived. To view them, put Shadow in your party and spend the night at an inn. There is a small chance you will see a dream of Shadow's that reflect his life before we encountered him in the World of Balance. The first four in sequence can be found by sleeping with Shadow in the party, but the fifth is watched automatically upon saving Shadow in the Cave on the Veldt. If you didn't save him on the Floating Continent, you'll see a different scene from the eyes of Relm, who takes Shadow's place in the cave if he isn't there. You don't get anything for doing this, but I like Shadow, so nuts to you.

A man named Clyde stands in darkness, waiting. A blonde haired thief named Clyde calls out to him, confessing that he is done for, and pleads with Clyde to find him. 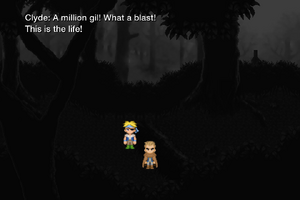 Clyde and Baram escape into a forest after robbing a train of 1,000,000 gil in plunder. As they make their way through the woods, Baram tells his partner that he thinks they should have a name to befit their lives as successful criminals. He proposes that they should call themselves the 'Shadow Bandits', which Clyde agrees with. 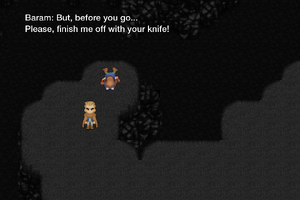 Baram has been wounded in an unspecified event, and is slowly dying from blood loss. Clyde tries to comfort his friend, but the injury is too great, and he can't move any further. Baram tells Clyde to run for it before he's captured, but asks him to finish him off with a knife to end his suffering. Unable to kill his only companion, Clyde runs off, leaving Baram to die a slow and painful death.

Clyde stumbles into a town, unaware of where he is or how he got there. A woman approaches, asking if he's alright, while a dog barks at her heels. When Clyde asks where he is, the woman replies that he's in Thamasa.

Years have passed since Clyde arrived in Thamasa, and he's since fathered a child. He departs from the village for reasons unknown, a familiar dog yipping after him. He wishes his daughter a happy life as he leaves her and the village of Thamasa behind.

Relm is in Thamasa, still a young girl, and asks after her father, who has decided to leave her in the hands of Strago Magus. 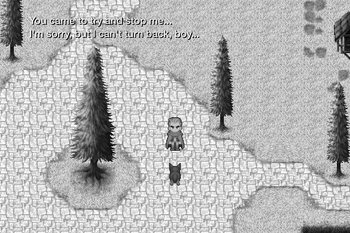 There you have it! You should infer from these dreams that Shadow is Relm's father, and that Strago is only an adoptive guardian. It's a plaintive story, isn't it? But then, so is everyone's in this tragic game... I only wonder when and why Clyde decided to dye his skin blue.

Retrieved from "https://finalfantasy.fandom.com/wiki/Walkthrough:Final_Fantasy_VI/CylindrusAltum/Part_XXXII?oldid=3214601"
Community content is available under CC-BY-SA unless otherwise noted.