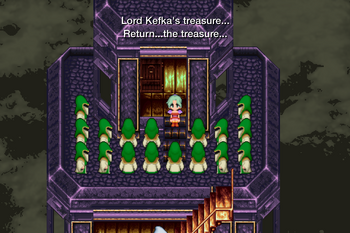 We only just got the Master's Scroll, so it seems well judged that we get the magic-equivalent next. You know where the Cultist's Tower is don't you? Serpent Trench? Where you got Strago? Well, off you go! I'll see ya there.

Oh hi! Glad you made it! This place, home to the cult of Keffie Palazzo, is a sky-penetrating tower with more stairs in it then the Milky Way has stars. Good fun, this site - just a constant journey upwards and upwards and upwards, no relief, no respite. God, how it shits me so. But I haven't even mentioned the ruul problem here: This particular tower is surrounded by an enchantment (something like that, I'm not really sure) that countermands every command you have except for 'Magic' and 'Mimic'. That includes Attack, just so you know. Umaro can still attack here because he isn't technically using a command, but let's be real about that. He's Umaro. Need I say more?

The enemies here, which I will describe in detail soon, are like you: they only use magic, and their running out of HP results in death. It would be extremely beneficial for you if you brought only your mages along (Terra, Celes, Relm + one other), and more beneficial still if at least two of them could cast ultima. Ultima is the key to victory here, of course, due to its power, and because it ignores reflect - and a lot of enemies here have reflect. MP can run low up here, though (there are no save points), so you have to be conservative with how you use MP (Gold Hairpin's a start). It's also very important that you have someone, hopefully two or more, who can cast Reraise. It's purpose will become clear once you reach the top of the Cult's Tower. If you lack Ultima or don't want to bother yourself with the enemies, you can also bring along Mog with the Molulu Charm to avoid dying way up there. In fact, it's much better if you make a fourth party member out of Mog: save your strength 'til the top, beat the boss, then make your way back down, battling enemies as you can.

That's all, I think. Shall we begin? Here's all the enemies, wonderfully titled as they are:

Or, as I said, just use the Molulu's Charm. You can train here later, when there's no danger of dying and having to start over. Now that that's out of the way, let's go ahead and start climbing. Run up the stairs. And... then some more. Keep going... After a while, a door will appear on the right. Enter it, and take the Safety Bit from the chest. Stand to the right of this chest, face the wall, and tap the screen. This will create a door one floor down that contains the Air Anchor, Edgar's best tool. It's an instant Death affair, so... hm. Not wild about that. Exit, then continue the climb. Doing well... Little higher...

On the next screen up, you're going to be doing more more movement of an ascending nature. Up. Then up. Oh! A door! It has a Genji Shield! Now where were we? Up... and up... UP...

On the third screen, you have some climbing ahead of you. Who could have ever said that this was boring? I admit, I was weak. I slapped the Molulu's Charm on right then and there - I'd had enough. I'm only a man! Weak-willed as I am... Continue until a door appears on the side again. There's treasure in here, but also a dragon. It's a break in the boredom, I suppose.

What a shameful display that was. We get the Holy Lance for victory, which Mog and Edgar will enjoy, I'm sure. Open the chest to receive the Kagenui for Shadow, then exit the room. Hey, guess what? More climbing, that's what.

Fourth screen, much like the third, can only be gotten through by going up. Better get going, then. Up. Up. Up. UUUUUUUUUP. Ooh! Another door! I'm starting to love these! Take the Force Armour from the chest, then resume your ascending of the tower. UUUUUUUP.

The fifth screen is the last, YAAAAY! Only the top most room remains, so run in there. If you haven't got someone with Reraise, then you're in trouble. The best thing you can do now is equip Quetzalli if no one has learned it: You'll soon see why. Pick up the Soul of Thamasa from the room. It turns 'magic' into dualcast, which means any person can cast two spells in a row. That's bloody strong with ultima. And if you cast quick on that person? Congratulations, you've successfully made yourself a god. Equip it on someone, then run outside. The cult of Kefka is coming up the stairs in a mob, angry at the theft of 'Lord Kefka's' treasure and demanding that you return it. ????? shows up again (busy ghost) and tries to kill us to take it back.

That was a COLOSSAL boss box. And for an 'easy' opponent as well!

With their leader dead and their treasure taken, the cult members simply vanish into thin air. Equip the Molulu's Charm, then get out of here the only way we can. By going down. Down. DOOOOOOWWWWWWWNNNNN.

Retrieved from "https://finalfantasy.fandom.com/wiki/Walkthrough:Final_Fantasy_VI/CylindrusAltum/Part_XXXI?oldid=3214599"
Community content is available under CC-BY-SA unless otherwise noted.