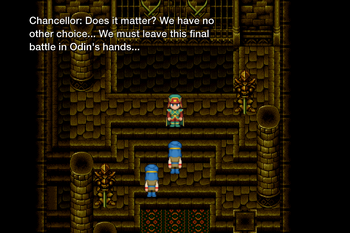 Our next adventure provides us with no new party members or ways to access Kefka, but it does give us a new place to explore, new enemies to fight, a lore to learn, and heaps of treasure to trawl for. Fly the falcon to Figaro castle, enter it, and tell the old guy near the engines to move the castle from one desert to the other. Halfway there, that same guy will report that the castle has caught onto something in the earth. Tell him to stop the engines, then proceed to the dungeons. Exit the castle through the cell that we used to enter it via South Figaro Caves to come into a new area.

Welcome to the Cave to the Ancient Castle, a brand new area to roam around! There are four types of opponent lurking around in the dark here: The Devil, Enuo, and Figaro Lizard. The main thing to note about them (apart from how weak they are) is that they can all teach a lore to Strago; Devils can teach Level 5 Death, Level 4 Flare and Level 3 Confuse, Figaro Lizards can use Dischord when alone or sketched, and Enuos can use Tsunami. All have auto-reflect and high magic defence, so rely on normal attacks and abilities to defeat them. While they are weak, they give off a ton of EXP and AP, so stay and train a bit if you want to level your party some more.

Walk east first, past the first staircase, then stopping at the second. Open the chest down there for a Hi-Ether, then walk through the southeast of the room to find a spacious chamber with a box in it. Ready your self for battle, and crack it open.

Our reward is the Gladius, a holy-imbued dagger that brings a great strength to Locke. Fall back to the last area and travel to the bottom-left corner of the room, where you can get a Wing Edge form the chest and enter the left side of the screen you were in when you faced the Master Tonberry. Follow the path south and east to a ladder, climb down the ladder, and walk beneath the bridge you passed over to get at the Death Tarot for Setzer. One, the Fixed Dice will always be stronger than any of Setzer's other toys. Two, every enemy here is undead, and will not be re-killed if hit with the instant-death properties of the weapon, so even if you didn't have the fixed dice, the Tarot is unusable in this place. Run south to you hit a wall, then walk left through what looks like an unnavigable path to find some steps. Allow this path to take you to the next area. Before you walk down those stairs nearest you, walk around the room to get an X-Potion and a Magicite shard from the chests in the south and west. Return to the centre and descend down the rift in the floor. Save at the blinking light before you continue up the next staircase. 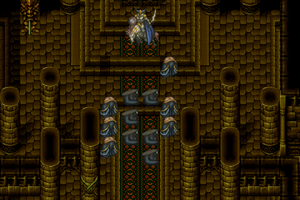 Okay, HERE'S the castle we've been hearing about! A blasted ruin lying beneath the sea, populated by uncountable numbers of enemies and treasures alike! Well, maybe we can count the treasures, but they're all worth it, trust me. Walk forward, and a cutscene will start. Millennia ago, during the War of the Magi, the castle was assaulted by enemy espers, and a good deal of the citadel was destroyed by their blitzkrieg. Inside the castle, (still in flashback mode), the chancellor defers all responsibility to the one remaining esper on their side, Odin. The lightning God cuts a few mortals in half with his Zantetsuken, but fails to dismember ?????, who's fighting him for some reason. Odin learns that you can't insta-kill a ghost, and gets turned into a fancy statue.

After the history lesson has concluded, walk up through the castle bailey to the front entrance. Instead of walking through the double-doors into the hall, walk through the smaller door on the right and collect the Punisher (a powerful rod, but still just a rod). Now enter the door to the left of the double-doors (hidden in the cloister). There's a treasure in a box here as well, but unlike the other it has a possessive sentinel guarding its secrets:

Master's Scroll for winning! You have no idea how awesome this thing is! It allows you to attack FOUR times in a row to random enemies, and it cannot be blocked. No wonder they put Sam in charge of guarding it. The best you can get out of this relic is with Setzer and his Fixed Dice, since that attack does the most damage of all to any opponent. You can also mix and match with other relics to create different effects; for instance, with a Genji Glove, you can have someone attack EIGHT times. It's an unstoppable combination, seriously. Don't know if anyone else noticed this, but you get 30,000 for beating Samurai Soul. Great Relic and huge payload. Incredible!

Enter the main hall now through the double doors in the centre. The enemies in here are slightly different from those outside, but at least there's less to write about! Lunatys only become problematic when they're alone, since they can cast Meteor. Kill them first, then shift your focus to the Armored Weapon, which is powerful and has great endurance, but fades away just like everyone else when killed. With the Master's Scroll now in hand, no non-boss creature can stop us! Run north through the first room, which is empty, and approach the throne in the next screen. Inspect the statue of Odin to obtain his magicite, simple as that. His instant death attack is kinda useless since very few enemies are vulnerable to instant death nowadays, but I never use summons anyway except for the spells they teach. Incidentally, he teaches Meteor at x1. Might have been good before we got Flare and Ultima, but now? Meh.

Shimmy to the right a bit and walk between the pillars next to the throne to find a small treasure room. Take the Blizzard Orb (for Umaro, makes him use Snowstorm sometimes, but is ultimately as shitty as the yeti himself) and Gold Hairpin, then walk back out. Walk onto the right throne, and follow these directions: Walk south five steps and examine the stones of the steps in front of you. This opens up something that you'll see later on. Don't know how anyone could have ever found this without being told to, but there you go. Walk right to find the east door into a new room. Look at the sparkle on the bookcase to read the diary of the Castle's former queen, who's been lustily captivated by Odin, like Maduin was with Maddy. Mmm, interspecies boffing, I like it. Walk right to the bucket by the table to get an X-Ether, then take the stairs that have been opened up by the hidden switch that no one could have ever uncovered without some kind of help.

Hey, there's a dragon down here! Walk up to the guy to start the battle against your fifth elemental dragon.

Easy, easy. Really hard to be considered a difficult boss with the Master's Scroll, but there you have it! Blame the developers for creating it, Blue Dragon, or Sam for failing to guard it! Not I!

We get Zantetsuken for winning, a powerful blade that may immediately kill an enemy. Kewl. Up ahead is the queen of the castle, frozen in stone. Don't examine her if you value Odin. If you value usefulness, on the other hand, DO examine her. The silent statue sheds a tear, and Odin is transformed into Raiden, who's waaaaay better than Odie. He can teach Quick instead of Meteor (the only one to do so unless you're playing the GBA/iOS version), a wonderful spell borrowed from FFV that allows you to use two abilities in quick succession without a waiting time in between. Imagine a person with a Genji Glove and Master's Scroll that then casts quick. Sixteen attacks. SIXTEEEEEEEEEEEN! Wha-wha-what were SE thinking, to give us such power?! Guh!

That's it for the Castle that is Ancient. We can't teleport out of here because that wouldn't be annoying enough, right? So we have to walk. While you do, contemplate the fact that even though Odin is gone, we can still learn Meteor later on from another esper: and then at a rate of x10 times. Me? I needn't do much contemplating, since I have Mog with me, and I just gave him the Molulu's Charm to avoid enemies on the way out. See ya, suckers! Mwahahahah!