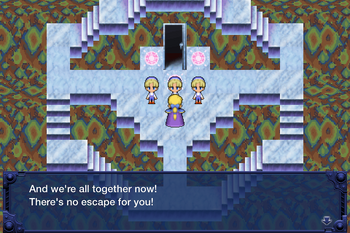 I'm glad to be moving on after that half day spent trying to get at least one Minerva Bustier. Heal the team, then return to the first room and enter the right door. Walk along the cavern path until a chest appears on the left; open it up for an X-Ether. Then walk south and drop through the hole in the floor. In this lower area, walk up the first set of stairs and step on the wooden bridge, then walk south and take a Gauntlet from the chest. Run east along the bridge until you find another one stretching northward out of your field of vision. Take this all the way up, and take a left to find some stairs which lead to a room with two switches inside. Inspect the one farthest from the entrance, and you'll be dropped into a new area, the Yeti's lair.

Have a look at the skull propped up on some bones to find a piece if magicite lodged in the eye socket. Remove it to receive the Midgardsormr magicite, and its owner will appear and try to take it back.

That was disenchanting. The worst boss yet. The Yeti will cower in the corner in fear of its new masters, so go up and speak to it. (Just found out, you DO need Mog here). Mog tells the furry guy that he's his boss, and commands that he join us. Looks like the Returners are desperate enough to let just anyone join nowadays: 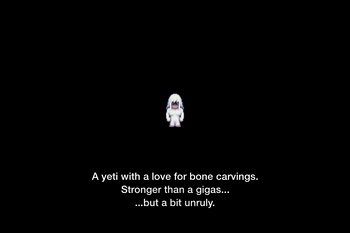 Walk up the steps after Umaro to magically arrive somewhere outside the mines. Cast teleport and walk back to the ship.

One thing I want to get out of the way, so I'll do it here. First would be that Midgardsormr magicite, an earthen summon that teaches the powerful Quake spell at x3, and the less impressive Graviga and Tornado, to be acquired at a rate of x1.

The next, more important thing I want to do comes with the procurement of Molulu's Charm, and that's Kefka's Tower. Clearly, we aren't going in there to fight Kefka, since we're too underlevelled and we're still missing a character (or two). All we want to do is sneak in, grab two items from three different chests, then walk out. Usually the high-powered enemies in the game's intended final dungeon would be incredibly hard to defeat with just our party as it is, but with Molulu's Charm that won't be a problem.

Fly to Kefka's Tower in the centre of the Southern Continent, hover directly over it, then try to land to get a scene. It's mainly about Celes, who's concerned that defeating the God of Magic will end all traces of it in the known world, and therefore Terra's fate as an Esperling. Once that's done, assemble your three parties of four. Put all your eggs in the Party 1 Basket, since the other two won't be doing anything in this run. Mog MUST also be in team 1 though, unless you want to fight the monsters in this place with your current strength.

Once you land, here's team 1's directions: Head west and south down the conveyor belt, then run around in a U shape until you find a chest with the Hypno Crown. This is a Relm-Helm that greatly improves the Control ability, which can be made to appear with the Fake Mustache. Walk down a bit from the chest and look to your left to find a red strip of metal amongst the metal detritus with a glowing yellow arrow pointing <- on it. Enter it to get to a new screen, walk down the appropriate escalator, then turn right to see a large door. March through that one, then dart over to the nearest chest to obtain its glorious bounty, the Fixed Dice. Then use teleport to leave.

The Fixed Dice are certainly worth whatever small bother it took you to prematurely explore Kefka's place. These things are singularly the most powerful weapon we will come to know in this game, being up to hitting the damage limit of 9999 even at this point! They're like the normal Dice, except there are three of them, and will do consistently high damage to all foes, regardless of defence, row, and level. They also turn Setzer into the strongest character on the team. Armies will bleed, Kingdoms will burn, and entire dynasties will become extinct before the might of the Fixed Dice! Where shall we harness this power first...

In the town of Maranda, a thief will tell you of a large Cactuar that attacked him recently. The fuck's a Catuar? Well, in the desert right outside Maranda, you can fight two enemies, the Slagworm and the Cactuar. The Slagworm isn't our target, but it shouldn't be overlooked because of that. It has 12,000 HP, which is nothing now that we have the Fixed Dice - although other input from the team will be required to take it down before it uses Sandstorm and Crush, which are very powerful attacks. If that fails, just cast stop on it to stop it from countering, or maybe even Death, since it is vulnerable. It grants you 5AP, which is nice to have. The Cactuar is the real point of our focus, granting 10AP and 10,000 gil for killing it. That is HUGE. They've got incredible stats though, even at the cost of their 3HP. The Fixed Dice should be able to take them down easily enough, or maybe even a blitz or tool, provided that it ignores defence.

This is the best way to level up AP and gil for now, and hence the best way to get those heavy hitting spells like Ultima and Flare. Beware though, as killing 10 Cactuars will lure out their boss, who we aren't ready to fight yet. Still and all, he'll never come out to fight unless you talk to that thief, so you should abstain from talking to him for now. Level up as much as you can, then get Cyan in the party. Fly away to Doma (it's east of Nikeah) to see the end to his story.

To enter the castle of Doma, Cyan must be present in the team, but he won't actually be joining the team until later on. The other three can be composed of whoever you want; preferably not Locke, since no one has anything to steal in this dungeon. Well, the boss does, but that's only a Memento Ring. You want that? Then bring Locke. If not, then don't bother. Just bring Terra/Celes/Relm for healing.

Enter the inn and agree to rest. The next morning, three of the party wakes up, but Cyan's still sleeping. Three young boys in blue skullcaps run in, and take a roll call. They're supposed to be nods to the three stooges, but I'm not feeling the joke. They claim ownership of Cy's soul, and jump inside. ??? The best choice of action at the moment is to run in after them, obviously.

Woooooow~~Cyan must have been smoking some bubonic chronic up on Mt. Zozo to be dreaming this place up. It's like Yellow Submarine but with good music playing in the background. First thing you'll notice (apart from the save point next to you - use it by the way) is that you only have one person in the party. That's bad. 'Specially for me, since I took Gau in there with me (dammit!). So we really need those other party members back, and FAST. Run up the stairs and move to where there are three doors. Go through the left one to find one of the Dream Stooges standing guard over one of your teammates (one of the good ones hopefully). Approach, and he runs off because he lacks strength without numbers. Waken the sleeping person, then take the only door out of here. Climb the stairs up to the top door, then take the right door and rescue your third party member. Full Party! Yeah! Almost.

While you're here, it would serve to know that this place is unrevisitable, and so to are its enemies. For the place you're in, the foes are: Weredragon, Parasite, Coco, Alluring Rider, and Pandora. Enter the last door, take the stairs, enter the next door, then climb down until you see the final door, surrounded by three pink sigils. Try to enter it, and the Dream Stooges appear for battle.

The three scourges are dead, but why are we still wandering around in Cyan's subconscious? There must be a greater problem at hand. Enter the door to drill deeper into Cyan's head.

Hey, it's the Phantom Train! I'm no shrink, but it seems the source of Cyan's psychological trauma lies in his memories. The new enemies to fight here are the Samurai, Al Jabr, and Suriander. Walk left into the carriage to find a save point.

Retrieved from "https://finalfantasy.fandom.com/wiki/Walkthrough:Final_Fantasy_VI/CylindrusAltum/Part_XXVII?oldid=3214588"
Community content is available under CC-BY-SA unless otherwise noted.