Back to recruiting people, I should think. We only have Mog and Strago to go, plus two new characters to find. Fly over to the northern central continent and search around the bottom of the mountain range spanning the land to find Narshe.

Narshe doesn't appear to be any different from the times before armageddon, but you should be able to tell from the ominous 'Dark World' music playing here that this just isn't so. Enemies roam the town, but they're weak, uninteresting, and too insignificant to mention by name. The doors are barricaded, as well - probably to keep the enemies out. With Locke by our side (literally IN THE PARTY) though, this won't be a problem. Walk up through the underpass to meet with a pickpocket who's disgruntled at not being able to steal form anyone in the town. He also mumbles about the only person being left in town is that 'one moogle...' OMG MOG!

There are other people here though. Most of the buildings house nothing at all, so run over to the weapon shop in the northwest of town, enter the area behind the counter, and exit through the door. The old man here has a piece of magicite in his possession that is extremely potent, and gives you one of the most important questions of the game to answer: Leve it as is, or refine it into a sword? The magicite, Ragnarok, while being a useless summon, can never be found again, while the sword, while powerful, can be acquired in limitless quantities by stealing from the final boss. Also, Ragnarok teaches Ultima. You thought Flare was good? Not half an hour later, and we get given something better! Incredible damage each turn! No boss can ever be considered easy again! For the love of God...

Ahem. Exit the house after making your 'choice', head north, and walk up the stairs to the right of the relic shop. Unlock the door, walk in, and find the old man in bed. He gives you the Cursed Shield, the worst piece of equipment in the game. But not if I have anything to say about it. If you fight 256 battles with the shield equipped, it will transform into the Paladin Shield, an awe-inspiring piece of equipment with massive defences, the ability to absorb four elements, and nullify the others. It's truly a great item to have, especially in the optional dungeon for Advance/iOS users, but there is a cost. That cost obviously being 256 battles. That's a shit ton of battles, but is it worth it to make a shield so awesome that even Kefka couldn't destroy it? I guess I'll let you decide. If you're like me, (too stupid not to put it aside and forget about it) fly over to Solitary Island and fight the enemies there with the Cursed Shield attached, enemies who happen to be incredibly weak, and die after one turn whether you touched them or not. After about two hours, BOOM! Best shield evar, in your hands. AAAND it teaches Ultima! Woah! Careful with the Cursed Shield though, it lowers stats drastically and inflicts many status ailments like Confuse, Berserk, and Doom on the wielder. 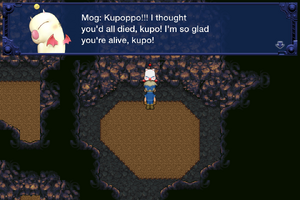 Back to Moogle searching. run north to the mines, and follow the path back to Mog's place in the back of the caves. Can't remember where that is? Boo-hoo! We all have problems, mine being I can't be bothered writing up directions for a place I've been to twice. I'll tell you this much, either take the side entrance next to the training school, or through the back of Arvis's house. The middle path through town only leads to the snow fields and the frozen esper. Along the way, you can also open up those chests that you didn't from the World of Balance! That will get you an Elixir, Ribbon, and a Guard Bracelet. Once you get to Mog, he's only to happy to join the team after finding us all alive, and thus lends us his power of mogginess. Before you leave, walk up to the spot where Mog was standing and look around some to find Molulu's Charm. That's actually one of the more important relics to be found in the game: it completely negates all enemy encounters, but only Mog can wear it. Perfect for running through dungeons that are too tough for you at present, and places where you can't be bothered sloging through wave after wave of useless weak enemies. Like, Narshe, for instance. Mog mentions that his yeti pet will certainly join us if we found him in his hidden lair in the depths of the mountainside, so let's go get him, I guess.

First, teleport out to the ship to get Mog on the team. I'm not sure if you need to do this, but I like to bring Mog out because it's his pal we're recruiting, plus he has one more dance to learn that can only be done on the snowfields of Narshe. And he can use Molulu's charm - a favourable merit considering the high enemy encounter rate in Narshe. To get to the cliffs, you have to go north through the town and enter via the front entrance. It's all very easy with the Molulu charm, no mindless thralls will bother you, petrified as they are at the little moogle and his necklace. Once you get to the battlefield where you fought Kefka, take the charm off. Fight one battle in this ice-capped domain to learn Snowman Rondo, Mog's last dance skill. You can put the relic back on if you want, but don't neglect to get EXP from now on. I know it appears tempting, but we need to keep levelling up our party if we're to take on Kefka.

Heal the team, then move forward. As you do, you'll notice a blue dragon dashing through the maze of ice walls. Approach it to fight the next elemental dragon.

4 Dragons Remaining. Halfway there, guys! We get a Force Shield, which is exactly like force armour, but it goes on the arm. Use the save point in the north of the area and heal up, then advance to the cliffs, where the frozen esper lies in wait. When you draw near to it, the screen starts to glow, and battle begins. 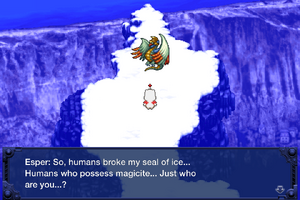 Val breaks from his icy tomb, and speaks to these strange creatures before him who possess magic. He thinks that the War of the Magi (or something close to it) is still waging on, so he entrusts himself into our care in order to help us restore balance to the now ruined world. The Valigarmanda magicite is like Maduin, but teaches Firaga and Blizzaga and Thundaga instead of their lesser elemental equivalents. They're taught at a rate of x1, but they're still excellent spells to have. I know it's getting difficult to spread all of these great spells around, but someone needs to have Val as an esper. Once you've equipped everyone with the necessary magicite, head back to the save point and wash off the weariness of battle. Return to where you fought Valigarmanda, and walk up to the opening in the cliff. Agree to leap forward into the abyss.

What the hell is that noise? Is that supposed to be music? Well where are we? This place is the dwelling of a yeti, a powerful and equally legendary creature in Nepali and Tibetan folklore that has since turned to rot in this game. The cave is largely labyrinthine and non-linear, so it'll be kind of difficult to explore this place without direct instructions. Before that, the enemies, of which there are 6:

No one has anything to steal, and they all drop Green Cherries, so you don't have to worry so much about imp.

To start, walk toward the left door. Walk close to the edges to avoid the pitfall in the centre here, then run through the cave opening and step toward the chest. HOLD ON. Monsters be in there, so we have to be prepared. Heal the party, give them their best equipment and weapons, place them in the back row, and if you have Locke, give him the Thief's Bracer. Open the box.

There's a chance you can get Minerva Bustiers from all three Tonberries as a drop, and a chance that you get none at all. In that sorry situation, you'd be better off restarting and trying again. We want at least one of those armours. I had to fight them over 10 times, but I think I was awfully unlucky. My skills in maths is never anything to go by, but I think you have at least a 32.something% chance of getting at least one.

Retrieved from "https://finalfantasy.fandom.com/wiki/Walkthrough:Final_Fantasy_VI/CylindrusAltum/Part_XXVI?oldid=3214587"
Community content is available under CC-BY-SA unless otherwise noted.