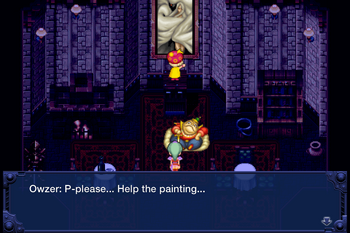 The old mansion that we visited to start the Opera quest in the World of Balance is now haunted by spooky ghosts that strike fear into the heart by pushing us gently down some stairs when we climb up them. After that happens, read the letter that appears on the desk. Owzer, custodian of this cursed edifice, has pissed a good portion of his finances away on a tasteful nude drawing of some woman wreathed in mist. That's the important part: the rest is just bitchery about how he can't find a good painter, and about his furniture and lighting arrangements. Keep reading to find that Owzer's feeling a bit weird, and he's heard some strange noises coming down from the cellar...

Turn the lights on, which is enough to repel the cowardly phantoms that were telling you to piss off. The second floor of the mansion holds a great number of boring still-life paintings that Paul Cézanne wouldn't wipe his arse with. There's a chest, an urn, a lamp, the late, not-so-great Gestahl, a bucket (that's right - someone painted a fucking bucket) and a suit of armour (it would seem). There's two other artworks here that at least provide something of use to us: The flowers throw you into battle with three Rafflesias, important because they have Nutkin suits to steal (can be bet at DNC for a Genji Armour), and are the only three of their kind to exist unless you kill them to get more to appear on the Veldt. They're not required to defeat, but they are missable enemies - not hard to defeat, all they do is try to entice you with all the voluptuousness that a parasitic flower is capable of. Last thing to do is examine the picture of the 'Lovely Lady' in the southwest corner to fight two Mistys. They have Moogle Suits to steal, and can also be found later on the Veldt. A good Bioing will do these durry-munching ladies in. The portrait of the mildly attractive lady without a face vanishes, and is replaced by a door. Enter it.

The basement of Owzer's place is haunted, and also infested with aggressive creatures that attack you. They are: Coeurl Cat, Crusher, Caladrius, and Blade Dancer. All are weak (except the Blade Dancers, since they throw crap atcha), and all have suits to steal, except for the Crusher enemy, which has Superballs to steal. They're like those little bouncy balls that you can chuck at people, but pretty powerful. Also, this is the only place to kill these guys in the whole game, so be sure to kill them here if you want them, since the mansion won't be haunted forever. Run down the stairs to find two more paintings. The right one of a door does nothing, but approaching the chair will commence a fight against an old lady and her army of kittens (it's the truth!). Ignore them (or fight the lady, whatever), then walk up the left hand corridor and enter the door. Grab the Moogle Suit from the chest, then run out and take the right door. Up here you'll find some doors that open and close over time. Walk behind them first to find a Lich Ring, which grants the gift of being dead. Bah! Go down to those three doors and wait for the left door to open before racing through. The other two doors will take you back to the start, so ignore them. Take the left door in the room you're in, and you'll come to a chamber with four floating chests. Standing on their shadow will cause them to fall to the ground, but you'll have to fight something to get at their contents. Your rewards for all of them are 293 gil, a Potion, an Ether, and a Gold Needle. 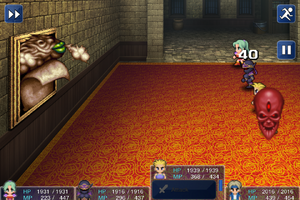 A paltry fare, I know, but it wouldn't become us to leave behind any treasure, no matter how dull. After that excitement, examine the portrait of the suit of armour on the wall.

Still Life is an easy sub-boss, possessing low HP and an awful weakness to fire. I'd just like to point out that before you kill this lame old painting, you should try to steal the Fake Mustache off it, one of only two in existence. It's a relic that slightly improves how much of Relm's shit I'm willing to deal with by giving her the slightly more useful 'Control' command in place of Sketch. After the easy fight against the portraiture of some ugly fish with green lipstick, enter the door and save. From here, the closest door will teleport you to the manse's entrance, while the one further back will lead you to the end of this place. Heal up, then take the back door.

Here we find a grossly overweight man called Owzer, the owner of this unpleasant dive. He asks us to help dispel a monster from his prized nude painting, and he's also got someone helping him at this very minute: Relm! Oh wow, did not see that coming. Foolish Relm stuffs up the extraction though, and Chadarnook the painting-dwelling demon comes out to defend his home. Or meal. Lover? What's he actually want with this painting?

Ew, there's that theme again, out of place as it is in every situation known to man. Relm assures us that Chaddykins will be a good boy from now on, and won't possess anymore paintings. Owzer thanks us, since that painting is worth more than his own life (oh honey - Pollock's 'No. 5' is worth more than your life), and tells us his life story. He bought a stone at auction, then tried to have someone paint the goddess inside it (Lakshmi) for his collection. Relm was invited to do this, but Chad came and wrecked everything up (Chad the demon, not Chad the country - small diff). We're all more bothered about the stone than this glutton's spiel, and we demand he tell us where it is. Examine the right bookshelf to find the Lakshmi magicite, and Relm joins the team. She promises to return and finish the painting. Owzer says he'll wait, since he's a great big bastard and walking around isn't really a part of his daily routine.

So Lakshmi, huh? What's she do? Cure, Cura, Regen and Esuna at rates above x15, and even a Curaga at Rate x1! Very nice, very nice indeed!

Since the place is so close to Jidoor, I thought why not? Run in and talk to the guy behind the front desk, who directs us to the Impresario, who's running about on the balcony in the auditorium chamber of the opera house. He's got another problem now, a 10 foot wide brown problem with teeth and a tail known as the Earth Dragon, who's seated himself in the middle of the stage. He doesn't know what to do, being incompetent, but thankfully, we do. Well, I do anyway. Walk up and right into the control room, and shove the man here aside. Heal your team here, and divvy up these two items: Angel Wings and Gaia Gear. The wings grant float, while the gear absorbs Earth damage. You will need it for the upcoming fight. If you have too few or none of those things, then you're in for a rough time of it. After prep is done, hit the third switch from the left to drop to the stage below. For no reason other than idiocy, the audience hasn't left since the world ended, or indeed, after Ultros was defeated on stage. Why? *Shrugs*. The maestro and the orchestra are also still present, and they kindly enough play us some battle music when the party walks up to the Dragon.

5 Dragons Remaining. *Applause* Our reward is the Magus Rod, and absolutely nothing else because the Impresario is a niggardly arsehole. We did kill a dragon though. Right? Woot!

Page is running short, so let's make this quick, okay? Remember that thing I told you about that monster that might attack the ship? No? Ugh! Dumbass! Deathgaze roams the skies (or more accurately one square in the sky), and flying into him will start a fight. You have to visit almost every square on the map for this to happen. Here's an easy way to do it: Face the Falcon north, then incline it slightly to the west or east. Then fly due north. Done right, this will take you over every square on the map. Before you do this, assemble your team. Any people will do, so long as their level is not a multiple of 5. Sooner than later hopefully, you'll run into the winged fury of Deathgaze.

We get Bahamut for that little inconvenience of a fight. Bahamut. King of Dragons. Ba-ha-mut. I don't believe it! It teaches Flare, the second best offensive spell in the game, at a rate of x2. Bahamut! He also gives a bonus of 50% HP on each level up!