This cave is a nettlesome place that allows you only a limited vision of your surroundings. It's a small place though, with teleportation devices that send you to another section of cave. Every time is random, so I can't guide you around here. There are five or so chests in this area (and also a save point somewhere), and they all give you a random number of coral. You'll see why in a bit. The creatures to be fought here (excluding the boss) are useless in every way: weak, low HP, with only Teleport stones to steal and drop, and with no useful rages or abilities that Strago can learn through lores.

To get at Hidon, you need to get to the room with the chest blocking your way forward: this is Hidon's guardian, and he won't be moved by anything except coral. We can get all this coral from the chests like I said, anywhere from 1 piece to 5, and the chests refill when you leave the screen. The coral will not show up in your inventory, and its truly like having acquired nothing at all. You need to count the coral you collect by hand, since the game has forgot that it's supposed to be assisting you here. That finicky chest wants the exact total of 22 pieces of coral to be thoroughly satisfied, so we need to go about gathering that exact amount. Any less, he gets pissed off and chucks you out. Any more, he gets pissed off and chucks you out. Even if you got one more than needed, he still throws a hissy fit and gives you the punt, so make sure you only have 22. If he does kick you out, you have to start again from scratch.

Once you have 22, find your way to the start again and feed that churlish chest. Once he moves himself out of the way, run forward into the next cave. Hey, there's Hidon! Let's kill it!

Strago is excited that he managed to kill off Hidon. Nonono - I killed Hidon. You're just a puppet that I use to exercise my will! You could never do it on your own old man, who are you kidding? He runs off to tell Gungho what happened, who (as it occurs) is not dead at all, and I was obviously just being dramatic. That evening, the two old men are chatting about what old men usually chat about, probably how much they hate kids these days, and reminiscing about the Eisenhower Administration. Strago is really starting to go overboard with his rigmarole about killing the Hidden Beast, and we later discover that the whole thing was a set up by Relm and Gungho to help Strago actually follow his dreams, rather than just talking about them. Ahh, nothing says 'I love you Grandpa' like endangering his life needlessly!

So what did we get out of this? For one, Strago's ultimate lore, which is almost as powerful as Ultima, and not as costly. We also wrapped up Strago's storyline, but that's an immaterial feeling of completeness rather than an actual prize, so I won't count that. You may have gotten that Thornlet (even though I said not to), which is actually a great helm defensively, but has zero magical defence and saps the user's HP. That's basically it. Also, fear not if you didn't get the lore from Hidon. He'll keep on reappearing until you get it, at which point he'll suddenly die. That's kind of him.

Alright, I've put this off for long enough - time to get the last character and fill out our team of 14! To get this guy, we need to do some strange stuff: Fly up to the triangular island in the northeast of the map (where you fought Intangir). Walk around a bit until you find the Zone Eater enemy, a huge worm-like creature with razor sharp teeth that rises out of the ground. Don't kill it just yet! We want it to use inhale on the entire party, which will draw them into the next dungeon. He might take his time though, and you have to wait while he uses futile attempts to kill you with gravity and some other attack that freezes. Once everyone's been inhaled, you'll end up in the belly of the beast.

This dungeon is so weird, and in a way, it's also kind of stupid. What if some other Zone Eater inhaled us? Would all the same stuff be in there? Or are all Zone Eater digestive systems connected via an interdimensional wormhole that can only be entered through being eaten? Question for the philosophers. You can leave the dungeon at any time by going up the stairs here, but I wouldn't have had you eaten by a worm if there wasn't a good purpose, so head down the south steps instead. The enemies in the invertebrate's gut are of no danger to your party and have weak equipment to steal, but the Coverts have Pinwheels as a rare steal, so try to get some of them.

Once in the next area, walk over to the bridges on the left, and stand at the end of the first one. There are train conductors or something or other running back and forth over the bridges, and touching one will get you pushed into the depths of the third floor. You have to tap the screen after facing the way you want to jump to leap from bridge to bridge while avoiding these randoms. There are items down on the third floor though, so I suggest you just get knocked down there on purpose. Take a Hi-Ether and Red Jacket (great armour, and with high fire resistance) from the chests, then step on the switch and take the path back up to the second floor. Head to the bridges now, and make a point of actually trying to cross this time. Open up the two chests on the way to obtain a Genji Armour, probably the best armour yet if you've been following me, and the Magical Brush, which Relm might enjoy some. Continue west along the middle bridge by allowing the pusher to walk to the right of you before jumping forward and darting left. The last part is the hardest, as it has a guy patrolling the smallest section of bridge. Wait until he's as far right as possible before jumping on and running right to the chest with a Fake Mustache in it. Then return to the top bridge (again - difficult) and make for the steps to go down to a new area. Save up at the save point, then move on.

This is a cool room! But dangerous. So dangerous. The ceiling is sort of evil, and will come down every few second to try and flatten you into Returner pancakes. You have to run fast to every safe point in the area, or you'll be crushed, and get a Game Over. Glad you saved, huh? Put your Sprint Shoes on for this if you have any. Run left when the chance appears and stand before the first chest (Zephyr Cloak). After the roof rises again, run left to stand in front of the next chest, which has a Hero's Ring. Now it gets a bit harder. Try judging where the roof is gonna fall, then run into the little 2x2 area closest to your position. After that, look for a small corner of land to the northwest that is left untouched by the falling ceiling. When it goes up again, dart in to open the chest (Pinwheel), then run back to the safety of the corner. Next time it's safe, run directly south to be free of this room with its malevolent roof.

Run south through a small room to arrive at one much larger. Follow the path to the first open chest, which you can leap across like a stepping stone. Go north next, then around until you're above that switch on the floor. Jump down, step on it, then jump back to the start of the room. Now you can continue to the left end of the room, which has a Thunder Shield in a chest. Make your way to the iron door, and force your way into the living space of a humble mime: 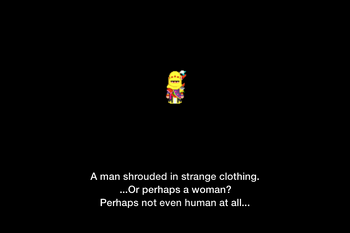 Gogo happily mimics the team in fighting Kefka, because of course that's what any proper mime would do. Teleport out of here to return to the surface, since I sure as hell ain't walking out.

Sorry about this. Really, I am. But I want to give every party member the chance to tie up the loose ends of their story, so... here's Gau's. 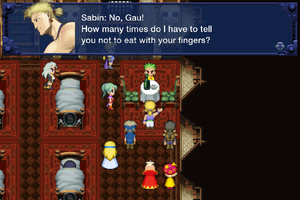 Head to the cabin on the northeast continent with Sabin and Gau in the party. That crazy old man from the World of Balance is here, mistakes Sabin for a handyman again, and we walk out. Sabin somehow gets the idea that the old man must be Gau's s dad, even though they look nothing alike, have no ostensible connections to each other, and that old guy must've been like 50 when he sired Gau. They're both crazy though, maybe it's genetic? Sab takes Gau all the way to Jidoor to get him dressed up for the meeting he's envisioned between estranged father and son, and to teach him the rules of etiquette. It's better if you do it now, when all party members have been acquired, since they all have something to say about Gau's gentrification (But not the optional characters Mog, Umaro and Gogo, who would rather be stoned than sit through this bullshit I'm guessing). 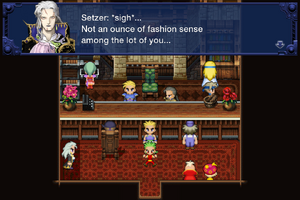 After they're done dressing Gau up like a right proper pillock, Sabin takes him 'home' to meet with his father and show him what a fine young man he's become. This sounds like a really bad idea to me, considering how unhinged the old dude is, but let's see where it takes us. Gau introduces himself as the lost son, but of course the Aged Man has no idea what he's talking about. That is, until he remembers a terrible 'nightmare' he had in which he was afflicted with a demon child, and ran off to dump it in the Veldt. Oh, how lovely! Gau turns into the raving wild child we know him as, and the old guy still believes that it was only a dream. Sabin's about to fuck him up for child abuse, but Gau stops him, then runs outside. Turns out Gau's just happy that his dad's okay.

Well, that's it for this bizarre tale. I told you you wouldn't get anything material out of it, but surely the gratification of helping poor Gau find his father is enough? Just don't bother returning to the guy anytime soon (in other words - ever again), since he doesn't say anything different, like Cid on his island. What a heartening end to this story. I only regret that Gau didn't hang on to his new getup. I'd have like to see him fight in it.

Next time, we'll do something useful.

Retrieved from "https://finalfantasy.fandom.com/wiki/Walkthrough:Final_Fantasy_VI/CylindrusAltum/Part_XXIX?oldid=3214597"
Community content is available under CC-BY-SA unless otherwise noted.