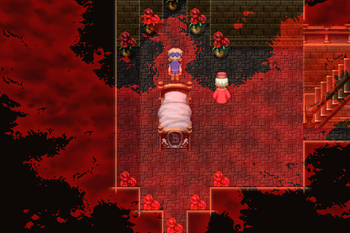 Enter the cave as Team 1 and step on the weight switch. Switch to Team 2 and take them through the door that was opened. When you get to your very first intersection of the cave, you'll notice a chest to the left. Don't try to get it; there's a pitfall in front of it! To the right we have spikes. These things are the first kind of trap floor we've yet encountered in the game, and treading on them will result in large chunks of HP deduction. Avoid them. Instead, walk south to find another switch located right above Team 1. Switch to them now, and enter the right door which has been opened for you. Run straight up to a switch, which lowers the spikes to your left. Change to team 2, and walk over those spikes (coulda been done without lowering them, but hurts less). On the other side, walk right, then down the stairs to the fourth switch of the level.

Go back to Team 1 after the others stand on that circle, to find that all the spikes surrounding you have vanished. Walk right, until you see Team 2. South of them are some stairs, and east of them a chest. Ignore that chest, since it, like so many others in this place, has had its contents stolen. Instead of opening it, walk directly south form it to find a hidden passage leading to a Teleport Stone. Take dem steps now, they lead to another screen. New enemies here: Ouroboros and Seaflowers. Both easy encounters. Head northwest from the stairs until you find an island in the lava. Disregard that chest - you should be smart enough to know how bad an idea it is to step on a bridge next to a chest in a trap-prone cave. Step on the pedestal on the island right and up from the island to make some stepping stones for Team 2. Switch to them now.

Go up those stairs and run left all the way to some more stairs. This takes you to the lave area, which you would have known if you stepped on that first trap which would have you dropped down here. Walk south from here, past some spikes to a staircase. In the upper room, stepping on the switch here will generate a bridge that safely leads to the first chest of the level, which holds a Wing Edge; one of Locke's strongest weapons. And it's got 25% instant death chance. Return to that place where the current team entered the Lava area, and turn right to find the step-stones. Once you're clear of them, go up and jump across the next three. Move up, ignore the chest beyond the spikes (which has nothing), and look for the switch east of your location. Once you've stood on it and sealed the path in front of you, change to Team 1.

From this switch you're on at the north of the room, travel south to the stairs which that the current team used to get down here. Continue south, then follow the path all the way to a room at the other end of the area. Forget that chest - it's empty. The next room has water in it, but we're not going to investigate the depths of the area just yet. Take the left staircase down to another switch, one that opens the path for Team 2 to move onward. Speaking of that, you should change to them now, take them forward, and enter the water area. Turn left and head down to find a Save Point (Salvation!), then cross the north bridge and trigger the switch, lowering the spikes for Team 1.

Team 1 again! Run back up into the cave you left behind, and follow the path around the lake to some stairs that lead back down to the lava floor. More stepping stones can be found down here, but there's a huge number of them going in many directions. Jump on the first block to take you all the way over to a small island. Then jump to the bottom left, then all the way to the bottom right, where there are TWO options. Try left if you must, but it only takes you to an empty chest. Our true destination can be sought out by taking the right path up to some stairs. We find ourselves back in the water area, where a door-knocker hangs nearby. Use it, and all the water drains out of the room, falling on and cooling the lava in the room below. Now how am I supposed to tell between rooms?! There's an obstruction down south, and the way back is blocked, so we have to turn back to Team 2.

Walk west, save again if you want (cause that boss is coming up), then search the area above the other party to find a switch which moves the obstacle. Switch back. Team 1 is free to walk downward now, which will take them to some stairs. Don't go up them yet: continue south to see a Red Dragon guarding a treasure chest. Time to heal your team up: this one's gonna be hard.

6 Dragons Remaining. Not bad. Not bad at all. We also get the Murakumo, an excellent katana for Cyan. You might have gotten it from the coliseum, but if not, here you are! We can also run up to that chest the dragon was guarding, which holds a Dragon Horn. This particular relic boosts the power of the jump command enormously, which can turn lamer characters like Gau and Strago into damage dealing machines. Provided that they also wear the Dragoon Boots, of course. It also works well on spear holders Mog and Edgar, who were all but programmed to be dragoons. And Edgar has his tools, which just leaves Mog. A dancing, geomancing, ultimate dragoon moogle... How is this guy anything but the best character ever?

Run up to the stairs from earlier, and step on the northernmost of the three steps. Flip back to the other team, who should probably save, since it's so close. Walk down the steps below the last circle they stood on, and follow the linear path west to the next screen. Go down south onto the solidified lava (or is it magma? where are we again?), then go south to find a pedestal raising out of the rock, with a chest perched on top. It holds our second/third Ribbon. Cool! Now get over to the northwest section of the area, takes the stairs, run south through the walkway hidden by an overhang of rock, then jump right over the two boulders to get to party 1. Awesome, everyone's back together! Take both your teams south to step on the pedestals, which will open the way leading south into the final area. Take whichever team you like best to go down there. 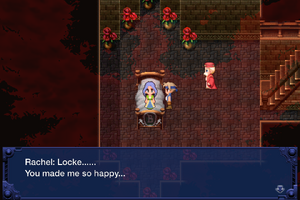 Locke's been spending his time down here in the cave, opening the chests, stealing the loot, and not even bothering to give his spoils to us. He wastes no time in telling us what he's been looking for (he barely cares that we're even alive!), a piece of magicite said to hold the power of revivification. Locke's been looking for the phoenix magicite for a while in order to bring Rachel back from the almost-dead, and he hopes that the now cracked esper stone holds that power. We get teleported back to Kohlingen, thank God, and Locke sees to his previous GF. Turns out that the developers over at SE simply can't cut anyone a break in this game - the magicite breaks, since the only artefact capable of reviving someone from catatonia has to be cracked. I feel your pain, Locke. Really.

Oh wait! The phoenix shards have woken Rachel from her ageless sleep, if only for a couple of seconds. She tells Locke that she's thankful for being with him, but she doesn't bother to say something really tender like 'I Love You' or something. She does give him clearance to get with Celes though. Score! Uh - um, I mean awww - that's so sweet! Phoenix is clearly gone, but Rachel orders the magicite to stop acting like a shit and reform itself already so that Locke and friends can use its power. Phoenix the pussy bows to the whims of this random human and we get the fiery bird's summon. Then Rachel explodes. Do we get her magicite? What spells does she teach? 100x Sleep? On second thought, I think I can do without.

Locke and Celes have a man-to-woman heart-to-heart about Rachel. He sure does forget her fast enough. Hey hey hey! He gives us the shit he looted! WOO! This includes an X-Potion, Phoenix Down, X-Ether, Elixir, Flame Shield (could've used that against Red Dragon thanks very much) and a Valiant Knife for himself, but the Wing Edge suits him better. The Phoenix magicite teaches Raise at a rate of x10, but the newer ones are surely the more outstanding:

Those are frikkin' badass spells. I can't tell which one I like more! Firaga's the most powerful offensive spell you have access to at the time, Curaga the best healing spell, Arise can bring people back at full health, and Reraise is your very own second chance spell. Cast it on a person, and they rise back up when knocked out. SO COOL!!! Give it to someone, ANYONE, immediately.

I've wasted almost a whole page on this bloody quest - time for something a little easier. Fly south from Kohlingen to the continent directly below it. The one with Zozo. Except it's also got Jidoor along the south coast.

Absolutely nothing has happened to this town. What the hell? If I was Kefka, I'd have blown this shithole up as a priority. That auction house especially. No new armour in the shops since Thamasa, but the weapon smith has the Partisan and Crystal sword for purchase, and both are wonderful pieces of body-piercing equipment. The Protect Ring is now for sale in the Relic shop, but you can ignore that if you want. The auction house has three new items to 'bid' for:

Excalipoor is supposed to be used to lure a certain boss/esper to fight in the coliseum, but who the hell has that kind of money!? Nah, we have to avoid this place for now. Which is what everyone usually says about it, I'm sure. The main point of our visit to Jidoor is to visit Owzer's mansion in order to find the next scattered Returner. Onward. Sadly. Sorry.