Before we get into the difficult, hard to get stuff, there's a few optional places to find before continuing our search for friends and allies. These next few sub-chapters are all quick visits, so they won't take up much of your time:

Let's see how old Cid is doing. He's alright? Oh okay. Cid never says anything different for the rest of the game, so don't bother talking to him again. Walk down to the beach where we got all those fish. Instead of a Magitek Knight washed up on the shore, we find the Quetzalli magicite, a fine magical stone that allows us to learn Haste, Slow and Float at higher rates, and also grants us access to Slowga and Hastega. Put that on Terra or Celes as soon as you can to learn Hastega - it'll come in handy. 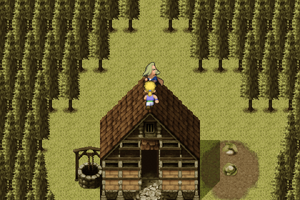 Fly over to the northwest of the map and find a Dragon's Neck Colosseum, which I will talk in depth about later. Fly east from there until you find a grove of trees in a + shape. Enter the centre tree and walk up to the cabin with Sabin in your party, and out walks Duncan. Remember Duncan? The guy who trained Vargas and Sabin until Var killed him? Well that turned out to be a falsehood: Duncan isn't dead at all. He's perfectly all right. Well, he does look exactly like Banon, but there's nothing to be done about that.

Now that he's seen Sabin again, he feels like teaching his ultimate technique to his best student so that it can be used to fight against Kefka. Commence scene, where they just beat each other up a bit. After they finish wailing on each other, they return, with Sabin having learned the 'Phantom Rush' blitz ability. Phantom Rush is Sab's strongest blitz, a game-breaking billow of punches and kicks that can deal over 4000 damage on most targets. No boss will ever be hard again!

Let's have a go at this place now that we know where to find it. Ultros the stupid octopus is working as the receptionist, but is not disposed to battle us ever again. Alright! Typhon is also present in the coliseum, but we don't have to worry about him for now. Here's what the DNC is about:

The best way to win here is to save outside and reset if the game cheats you enough to warrant a restart. Taking in mind the items you probably have at this point, here's some stuff you can get at the Coliseum, the object you must bet, and the enemy you must face:

None of these items are necessary when you think about moving forward, but they are nice to have.

There's plenty more stuff to acquire from the Coliseum, but we can't receive any of it until we get a greater stock of rare items. Back to the main game.

The game really wanted you to do this part next, since the ship was lead here by that bird, and because the boss at the end of the section doesn't have anything to steal (because Locke isn't with us). There's also a character up for grabs, and plenty of treasure to trawl for, so I guess we're doing it!

The citizens of town, who have taken to dashing around in circles ad infinitum, will mostly talk about a powerful warrior who stopped by earlier, speaking some kind of archaic gabble. Now who do we know who has that social problem? Walk inside the armour shop to find some new wares available for purchase. You have a Crystal Helm and some Mail already, so that just leaves a Crystal Shield, Oath Veil, Black Garb and a Magus Robe. All are very high-priced, but all are first-rate protective clothing. Buy what you can, then proceed to the weapon shop, where they're selling Swordbreakers for 16,000 gil, and Falchions for 17,000. Very costly; buy only what you can.

Run to the rightmost house next, where Lola continues to dwell. Lolz has been receiving dozens of silk bouquets from who she assumes is her boyfriend in Mobliz. We know for a fact that the guy is dead, so who's been sending the flowers? Read the letter to find out who's been posing as the deceased toy boy. Turns out it's Cyan, who would much rather tease young floozies than search for his friends. Agree to send a bird for the youthful Lolita and talk to the bird outside. After some pissing around in the skies, birdie finally lands in the location of the receiver: Zozo.

Every enemy in Zozo is changed, meaning that you should have problems with this area so far as the enemies are concerned. Talk to the bird, who will not fly off. Walk east, then south to the inn, but don't speak to the merchant outside it, who does lie to us, totally unsurprisingly. Whatever you do, don't buy the Rust-Rid from him for 1000 gil, then refrain from going to the pub below you and climbing to the top. Use the item you just bought on the door that isn't corroded, then walk all the way through to reach the Honey Bee Inn.

Every enemy in this mountain has high evasiveness, so there's two things we can do about that: The worse choice is to equip Sniper Eyes on the group so that they won't miss. The better option is to rely on abilities that aren't affected by evasion, like magic, blitz, tools, slots, etc. Concerning the enemies themselves, they're all very easy (more so now that we have Phantom Rush), which provides more proof that this level was meant to be done now before you did anything else. The only ones you need concern yourself about are the Mugbears, who steal from you on their first turn, then run away on the next one. I highly advise that you kill those guys first, or else you'll find yourself a much poorer wiki-goer. Punishers and Glasya Labolases are also worth noting - they have the Rising Sun and Muscle Belt equipment to steal, but you have to wait until getting Locke back before attempting to pilfer them.

Run west past some stairs going nowhere special, and check out the first chest you see for an Ice Shield. Walk down the stairs to find a Red Cap (both of these items are great, by the way), then walk down the next set of steps to appear in the second area of the screen. Walk the linear path to a bit of sunlight streaming through the cave ceiling, then head west to find a chest bathed in the luminescence of another skylight - this one holds a Thunder Shield, the electric equivalent of Ice Shield. Keep following that path you're on to wind up in the upper part of the screen again. Stop when you see the chest on your right and open it up to find the Aegis Shield, the best protection we've found in this place yet. It's also the strongest shield we've found, and equipping it comes with a grand boost in defence and magical defence.

Walk through the cave opening to appear on the outer slopes of the peak. Out here we'll find a remarkable relic, the Gold Hairpin. This item (the one that we decided against getting when we rescued Mog in the World of Balance), when worn, halves MP consumption. Absolutely equip this on Terra or Celes straight away. Adjourn to the caves again, then walk north to the next exit to find ourselves outside again. Head west over the rope bridge and back into some more caves. Resume going west until you reach a save point, heal and save your progress, then advance to the switch above you and step on it. This unleashes a dragon from a chest found in the heights of the cave, which will fly around the room and eventually collide with you. You can return to the save point and record your progress before that happens, but eventually, you'll be thrust into battle with the Storm Dragon.

7 Dragons Remaining. Yeah! We also get the Force Armour for St. George-ing the dragon: it doesn't have the best defensive qualities, but it resists Fire, Ice, Lightning, Wind and Earth damage from all enemies. Considering that four of those elements are possessed by dragons we haven't fought yet, I'd call that a win.

There isn't much room here left, so I guess we'll have to find Cyan on the next page. See you there.