Fire in the Sky Edit

Choose a good team to take with you to the new area. The only thing I really suggest is Locke to steal and good mage to heal. Oh! Rhyming! It was meant to be! Annoyingly, only three people can be selected. It serves no purpose. None other than to piss me off.

It looks like a clear approach to the hovering landmass, but an unexpected catch looms in sight - the Imperial Air Force. Since when has their been an Imperial Air Force? Where were they in the battle at Narshe? To take us to the Crescent Isle? Couldn't it have defended Vector from the espers? No. Lazy writing to complicate the plot: and these bastards don't even have the decency to give us a poorly thought out excuse. You get to walk on the deck of the airship, and every so often you'll have to fight off some enemies. After five lots of Sky Armours and Spitfires (between which you get to heal), a strange object approaches the ship. Maybe it's salvation? Could it be Shadow? Maybe Gestahl has come to his senses, and wants to truly stop the fighting? Hah! When pigs fly!

Our heroes are granted the power of temporary sustained flight, and just in time to face the flagship of the Imperial Air force (perhaps). Oh, and Typhon' snort has magical healing properties, so HP is healed. Yay!

Wait! I think I have it! The Square team was smoking pot when they came up with the air force that appeared from nowhere, the flying octopus and swine, and the warship with the funny faces drawn on. And they referenced it with 420! Ah, you sly foxes...

We're finally here, and greeting us is some nice music courtesy of Mr. Uematsu. Next to us is a save point (USE) and below it, our fourth party member. Oui oui, Shadow is rejoining the team, but how could he possibly have gotten here? Set him up with some equipment and an esper, then head right. Here's what we're dealing with on the airborne slab of rock they call the FC:

Powerful enemies, but a lot of them are vulnerable to instant death, so the Assassin's Dagger works excellently here. Let's move. Go east to some stairs leading to a blockage of some sort. It gives way as you approach, a common occurrence in this area. Follow the path to the next obstacle, which melts away as you approach it. Walk east, and then north as soon as you can to find a blue orb. These are the makeshift chests of the area, and this one holds the Murasame, a great weapon for Cyan. Walk east summore, and stairs appear. Go down them, and examine the blue orb for a monster-in-a-sphere. The Gigantos is a strong enemy, with incredibly powerful attacks that can tear the team apart quickly. Sadly for him, he's weak against Bio, two casts of which may be enough to kill him, and can be stopped, which makes him all together worthless. For winning, you get the Sasuke, Shadow's best weapon yet (just don't remove that Assassin's Dagger - maybe give him the Genji Glove?). You'll want to save after winning that, so run back to the save point if you really want to survive here.

Move down to where you got the Murasame. The notch in the formation to its right has a small space in front of it that will open up some stairs, leading up a hill formation. Step into the centre, and you'll be swallowed by the hill and spat at elsewhere. Ooh, that's charming! Go down the stairs, then down a second set. Go right from there to find a strange little switch like object that constructs a bridge to your right when you tread on it. Take this new span over to the other side, jump down the first steps that appear, pay no heed of the next flight and walk east to a second transport device. Run south and enter the left of the two hills. Step on the switch just below the place you were sent to, then head north and step on another. These two rockers have opened up a path forward that we can now utilise. Walk down the last set of steps you ascended, and run left along the newly created path.

What's this? We've been here before! But now we have a new path opened up to us. Go down the stairs, then down the next ones that we passed up earlier. Go right along that platform we lowered, clamber down some stairs, then clamber up MORE. God, this is like the land of the thousand staircases. At the top, march east then north to a switch, which creates another transporter. Don't enter it just yet - instead, search around the east to find a coffer with a Beret in it, then investigate further south to uncover another teleporting hill thingy. You know what these things remind me of? Anuses. This place is gross. It drops you down into a rectum I suppose, which has a nice save point for you to use.

Get out of there, run back to the last switch you used, and take the path up to the next cloaca to the final area. The Blackjack is here, Huzzah! Jump down there if you want to finish up on the World of Balance or heal or rearrange your party members. WARNING: This is your VERY LAST chance to do shit in the world as it currently exists. Follow up on anything you need to before returning to the FC. By the way, Shadow won't come with you onto the ship. He comes up with some crap excuse, but I can't remember what it is. When you return to the dungeon, you have to begin from the start. Not that bad, I guess, since we know the way. Get back to where the BJ was, then turn left. Once the formation moves out of the way, we're cleared to approach Gestahl and Kefka. Before we do though, we'll have to get through the boss of the area: a creature so powerful and arrogant that it has its very own boss music - The Ultima Weapon!

Your reward for winning is Shadow running off, providing us with the same thin pretext he used if you went back to the Floating Continent. He feels bad about helping the empire, so he isn't going to come help us destroy it by killing that gluttonous emperor. By the way, this is really the last chance to go back to the Blackjack. Sure you don't need to go? Okay, walk up the stairs and confront the G-man and his pet clown. 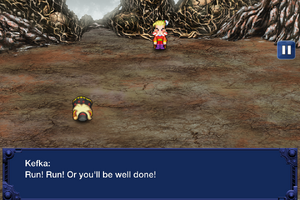 If she wasn't in your team, Celes will run up now, as she has some unfinished business with the empire. Gestahl, who has been waiting patiently for our team to journey through the continent and defeat the Ultima Weapon just so he could brag about his newfound omnipotence, begins to absorb power from the Warring Triad. Noting that Celes is something special, good ol' Gesty with his genius mind decides to mate general with general, having Celes carry Kefka's babies. BLLLLEERRRGGGHHHH! Nasty!

Kefka gives her a sword to kill the others, but Celes, horrified at the prospect of the pitter-patter of little clown feet running about her, decides to stab him in the chest (To quote Kill Bill: Do you still wish to penetrate me? Or is it I, who has penetrated you?!). However, Celes forgot that Kefka doesn't have a heart, so chest stabbing isn't going to cut it. A pissed off Palazzo stands in the centre of the Triad, and begins to absorb their power for his own. Gestahl tries to stop him, but fails, being fat and stupid and all. Cue a cinematic battle, where Ice-G realises that Kefka is absorbing all his magic via the WT. Under Kef's guidance, the Emperor is struck down by a bolt of lightning, and he pushes that useless, dumbassed, lying sack of lard over the edge of the continent. Woo-hoo! Celebrations!

With no one capable of stopping him, Kefka shifts the delicate balance of the Warring Triad, causing a disturbance in time-space or something equally weird and wonderful. Shadow jumps in, obviously over whatever issues he had before, and moves the statues himself in such a way that Kefka is temporarily trapped between them. The Assassin tells us to run, that he will catch up to them - I'll hold him to that. The time has come to escape this slab of skyward land and return to the land below. You're given six minutes to flee this place, but that's plenty of time (more time than Gestahl gave us at Vector, God rest his obnoxious soul). Run right along the linear path, having sometimes to fight a weak random encounter called Naude who isn't worthy of description. They appear quite a lot though, and detract heavily from the timer, so maybe wear a Ward Bangle to keep some of them at bay. Continue east (the path will break up as you go), until you come to a chest. Approach the platform it is on from the east (or else the ground will fall away leaving you with no way up there) to get an Elixir.

Approach the sparkle in the east to fight some sham-boss who tries too hard to be a real boss, but can't. It's a Pinocchio story, I tells ya. She casts doom on the entire party, but the only one whose days are numbered is her. After she dies, walk up to the edge. Don't Jump! because we have to wait for Shadow. If you don't, he'll die up here, and will never be able to be recruited again. I don't care if you don't like him - DO IT or I'm so not going to be your friend anymore. WIth four seconds left on the clock, Shadow appears, and we all jump onto the Blackjack together.

Kefka, having absorbed the power of all those espers and now the Warring Triad, has become all an all-powerful being of unconquerable strength: strength which he uses to rearrange the face of the entire world. Everyone is gathered on the BJ (except for Gau/Mog because again - not important enough), when the airship is suddenly and violently ripped in half, scattering its occupants to the wind.

On that day, the world was changed forever...

At least Gestahl died, right? And get this, we never have to see Banon again! The world as we know it has gone to shit, but today was a good day for mankind. See you next time, ev'rybody. 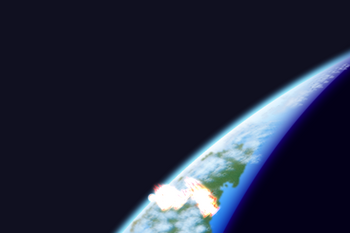 Retrieved from "https://finalfantasy.fandom.com/wiki/Walkthrough:Final_Fantasy_VI/CylindrusAltum/Part_XVIII?oldid=3214559"
Community content is available under CC-BY-SA unless otherwise noted.