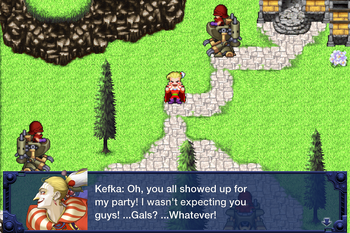 There are five enemies here, and they all suck. There is never any danger of blacking out or anything, so you don't have to try too hard. Keep an eye out for Adamankary though, as they have valuable Golden Shields to steal that you can sell later on. They can also use Snort, which can kick a character out of battle. Also of note is Venobennu, found on the slopes, who may use White Wind, a Lore for Strago. Since every character can learn every spell in this game, it's a bit unneeded, but it has its uses. 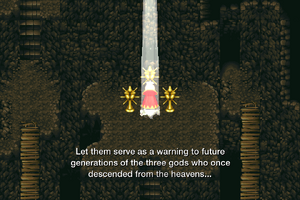 In the first room, take the Healing Rod from the chest, then walk north and east. As you come near the cave mouth, you'll see Relm run off to the left. Goddamit - I think I know how this little journey is going to end. Relm jumps in to help us at a time of great need, and convinces Pops that she's ready for the real world. Am I right? I am, aren't I? Exit onto the mountain slopes, and walk around to the entrance that takes you back into the cave. Walk up and right to see Relm run up, see you, then quickly run back out. Did no one see her? Are we playing that game where we pretend like that nitwit didn't just come within one step of touching us? Follow her out into the next room, which contains three golden statuettes and a beam of sunlight illuminating the ground between them. Walk up to the statues for a history lesson: These things depict the Warring Triad, a troika of Gods that created magic as we know it. Relm runs in, but no one sees her (Are you fucking blind, Terra?!) and she hides in the corner. The espers, being created by the Warring Triad, are inordinately drawn to the high magic yield in the area. But where are these espers? Apparently, they may be just up ahead! Walk down the steps, and... Ultros... shows...... up. The stupid mollusca wants to steal the statues to get some respect from Siegfried (Uhh - no man felled with one blow can be respected), but he doesn't appear to realise that the statues are only likenesses, and have no power at all. If only he had as many brains as he did arms...

Relm has joined the party, so its time to see what we can make of her: 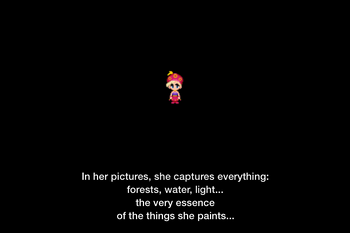 Walk into the next room and use the save point. This area has three square panels on the floor that drop you down onto the next floor in certain locations. Take the top one first, then when you arrive one floor lower, take the door above you to get the Chocobo Suit. Return to where you fell down, then take the other doorway to get to a Tabby Suit. These suit items are armour pieces exclusive to Relm and Strago that give high boosts to defense and magical power. I only wish that they got to wear them during battle and in exploration. Jump down the bridge at the bottom here to return to that area just before where we fought Ultros. Return to the save point room and use the right square to find a second area in that bottom room. Take the only exit that doesn't lead back to the Warring Triad room and get the X-Potion from out on the cliff. Go back to the save area once more and jump through the final doorway. Run north into the light, then west into a skylight-filled cave. Walk south, and you'll see a fairy floating around.

The espers begin to surround the party, probably poised for the kill. Before they do, Yura walks in, that guy from the land of Espers that warned Maduin about Madeline's entrance into their world. Guess he's the big cheese of the esper company now. What a promotion! Terra and Yura have some flashing, sparkling interaction between each other (Oh geez, I hope she isn't up the duff now...), and Maduin's former companion decides that Terra is different from the others. According to him, the espers lost control of their powers upon stepping into the human world, which is why Vector and its citizens suffered the way it did. Locke, ever the idealistic fool, says that the Empire wishes to forgive the espers for their attack, and asks them to accompany the team to Thamasa to meet with General Leo. Off we go then! 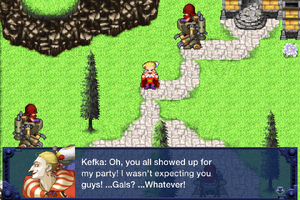 The gang meets up with Leo, who is highly grateful for his help. Being the highly chivalrous and polite person he is, Leo makes instant besties with Yura, and gains the trust of the esper folk. Everyone is friends, and the pursuit of true peace has finally bared fruit. Celes and Locke patch up their differences, all is well. And they all lived happily ever after. The End.

It's that psycho clown! Ohhhhhhh this is bad. Using some outrageous magical powers that I have no idea how he came to possess, Kefka and his band of soldiers start blowing things up - killing soldiers and knocking most of the team unconscious. Leo runs in to stop the madness, but Kefka, using that same unfounded power, turns every esper in the village into magicite - under the orders of that treacherous Gestahl. Feel bad for having Vector destroyed now? I didn't think so. As befits a maniac, Kefka orders the village of Thamasa burnt to the ground for the sheer thrill of it. Only one man has a hope in hell of stopping the mad mage, and control now comes to him. 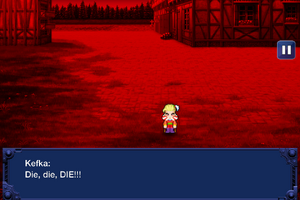 Run up and talk to Kefka to begin battle. This isn't a serious contest, as Kefka proves once again that he's just not cut out to be a competent general. After Keffie fades from sight, Leo hears the jester shout the name of Emperor Gestahl, and summons him to the field. Gestahl tells Leo that he only deceived him (and at length, the Returners) in order to get the magicite. Gesathl vanishes as quickly as he appeared, leaving that scoundrel Palazzo in his place. Apparently, the thing we killed was not Kefka, just an illusion. Turns out the real Kefka is much stronger. But how does that explain how he got so strong? He was rotting in a jail cell the last time we saw him! In one horrible blow, Kefka murders General Leo, and our chance at peace is dashed into a million little pieces.

Furious at the death of their brethren and sestren, the remaining espers smash open the Sealed Gate and attack Kefka as a mighty hoard of pissed-off summons. Doesn't mean a thing though, because Kefka has dipped into the pot of unexplained story occurrences and become totalitarian in strength; no human nor magical beast can match his imminent power that he got from nowhere. He clicks his fingers, then pow - raining magicite. With all the espers power within his grasp, Kefka is off to the Sealed Gate to claim the 'Final Treasure'.

Later, Tezz, Locke, Celes, Relm and Strago gather at the funeral cairn constructed for Leo. After a eulogy by Terra that includes more spiel about herself, Interceptor walks up, wounded. Shadow is nowhere to be found - possibly dead. Locke dresses the wound (making Celes amorous), and Relm promises to take care of him. Having fully repaired the Blackjack, Setzer and company (excluding Mog and Gau because clearly they aren't important enough) fly to Thamasa to pick everyone up. Edgar managed to warn everyone of the impending trap because of a young serving girl that provided him with information in exchange for a few 'pleasantries'. Strago wants to come along, so of course Relm does too. She even threatens to paint Sabin's portrait when she doesn't get her way. No, God! ANYTHING BUT THAT! AAAAHHHH!

But eventually all is made well (Er - except for that whole thing about Leo dying and Gestahl being an untrustworthy prick and Kefka being a dangerously volatile sociopath), and everyone heads to the ship to plan. Edgar stays back, and Relm starts talking to him. There's some perverted, subtextual shit going on here where Edgar kinda lusts after the ten year old Relm. They toned it down for the iOS/Android version I think, but still - *Shudder*.

Walk onto the airship, where we discover G-Money's plan: To capture the Warring Triad! I'm surprised that Kefka hasn't gone ahead and killed Gestahl yet, he's certainly powerful enough. As a knee-jerk reaction to having twats step on it, the eastern edge of the southern continent (where the Cave to the Sealed Gate is) rises into the air to become the Floating Continent.

We can head straight to the Floating Continent now to stop G and K's plan to destroy the world or become ultimate magicians or whatever, but after completing that, we won't be able to return to the World of Balance ever again. We've got stuff to do before that happens! 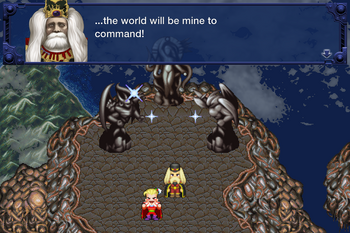 Retrieved from "https://finalfantasy.fandom.com/wiki/Walkthrough:Final_Fantasy_VI/CylindrusAltum/Part_XVI?oldid=3214556"
Community content is available under CC-BY-SA unless otherwise noted.