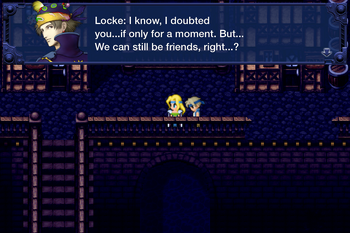 Before the Boat[edit source]

Oh, one moment. Before running off to Albrook, we need to raid that armoury at the observation post. DON'T walk across the desert to get there. It has some Bone Dragons lurking inside, and believe you me - those things are nasty. The unlocked room contains these items: Reflect Ring, X-Potion, Angel Wings (float status), Hi-Ether, Angel Ring (regen status), Alarm Earring, Elixir, Hermes Sandals, and a total of 41,000 gil to be found in three chests, a Flametongue in the stove, and an Elixir in the bottom right corner (it's hidden). Now off to Albrook. If you need to de-equip your non-present party members to get their goods, you'll have to head off to the Blackjack to talk to that guy on the casino floor that does it for you. Whilst there, you can also see a scene between Setzer and Cid in the engine room, which touched a bit on Setzer's past with a woman named Darill. Like every other story in this game, it ends in tragedy. If I wasn't so sure he was dead, I'd say Shakespeare rose from the dead just to screen-write for SE. Also, the trip over to the BJ (hahaha) is long and hard (hahaha), so you may want to use the newly acquired Ward Bangle (haha-oh wait, that's not funny).

Transport your fat caboose over to Albrook docks, check the first crate you see for a Teleport Stone, and speak to Leo. He introduces our two companions for the journey, General Celes (Where has she been?) and a mercenary hired from within the town - Shadow! Aw, hey buddy! How you doin'! Oh wait, these guys don't know Shadow. Ah, well, I guess everyone will be properly introduced eventually. But yeah, even though there should be this big heartwarming reunion between Celes and Locke (and even Terra, who did know her after all), they just all stand there like they saw each other two minutes ago down at the pub. I can understand Locke, but Terra? Just because she can't feel love doesn't mean that she doesn't have feelings. Or does she? Not explained very well. Preparations are underway with the upcoming voyage, but they'll take some time. While we wait, head to the inn for a free rest. At night, Locke tries to score with Celes, but boy is she frosty. Rather than talk to him about his moment of poor judgment, she runs off. Struck out. Next morning, head to the ship to depart for the Crescent Island.

This is a wasteful experience, this journey. Nothing noteworthy ever happens, just a lot of chit-chat that goes nowhere. Speak to Leo for some shit about feelings and love. Terra asks the General about how he feels, and if a human could love an esper and more boring crap like that - if I was present, I'd jump off the boat and swim the rest of the way. Shadow appears after Leo departs, expressing his desire to sleep out under the stars. Turns out he was totally eavesdropping on the love-deprived Terra, but he doesn't even have the decency to help her out, giving the standard 'You have to figure it out by yourself' response. And get this - the one time he does give some advice, she pisses off. Ah, that's Shadow for you - smooth. And out comes Locke, hurling over the railing. I'd still rather be swimming to the island. Oh, and Celes doesn't make an appearance still. Sulky bitch.

Speak to Leo next morning, who decides to split the team up (stealing Celes for himself), leaving Terra and Locke with Shadow. Talk to Locke, and Celes finally decides to get some words out before they part ways. Locke has turned into a douche since then, and just walks away. Once on land, walk northeast to our target, the final city in the World of Balance: Thamasa.

I hate the people who live here. Not because of a particular two people that you might know about already, but because of everyone else. If you landed here with the Blackjack before, everyone you talked to would say 'I don't know you'. Even the merchants denied me service because they didn't know who I was. As if that was any reason to deny me service. But now that the story has caught up, suddenly they're queuing up to kiss my arse and sell me their shit. They're also extremely xenophobic, and distrusting of outsiders. For that reason, you shouldn't stay at the inn. Outsiders get the unfair price of 1500 gil to stay the night. Wait - what's the point of an inn if they don't cater to outsiders? Fuck them.

Okay, maybe we actually want their stuff, but I'm not thanking them for it. New armour you can get here includes Mystery Veils, Gaia Gear, and exorbitantly priced Golden Armour (10,000 gil!). Don't buy the Gaia Gear, because the Briareus enemy (found outside the city), has it to steal, albeit rarely. The weapons, on the other hand, are as follows: Flame/Lightning/Ice Rods, worth 3000 each - don't get the Ice/Fire ones, you'll find those soon, and Darts + Heavy Lance, both worth 10,000 gil. Since neither Setzer nor Edgar/Mog is here, you don't have to buy either. Yet. But I guess you could get them both as souvenirs for when you return. Actually, scratch that point - you might as well purchase them now if you have the funds - and if you raided the armoury like I said, then that should be easy. If you screwed up at the Imperial Palace, then TS, my friend.

Now for some items. from the start, go over to the item shop and examine the middle barrel to its right for Eye Drops. Cross the bridge, examine the barrel here for a Gold Needle, then return to the main area. Get to the inn, and examine the third barrel through the gate for a Phoenix Down. Walk up the narrow pass above you, and check one of the barrels here for an Echo Screen. 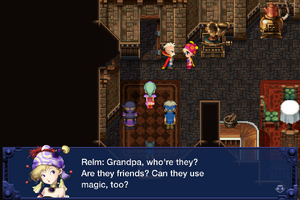 Here's the deal with Thamasa and its citizens: They pretend not to be able to cast magic to hide the fact that they're descendant of the magi. Speak to them, and they will only deny any allegations made. We need to catch one casting a spell to uncover the secret for ourselves: thankfully, these are simple-minded folk, and catching them in the act will be easy. Head to the northeast of town, where a little kid is attempting to cast the 'Fire' spell. He sees us, then runs off. Examine the barrel for a Green Cherry, then walk left and move up the alley between the hill and the house to watch another scene, where a woman almost blows their cover by casting cure. Time to accuse someone of something. Enter the top right house (next to the one blocked by that stupid child) and speak to the man in blue who's hair looks like a carrot sticking up out of the soil. Hey hey, turns out that this guy's going to join us soon, thanks to the spoiler attributed to the introduction that appears. We also get to name him: his default name is Strago Magus.

Strago talks about having hear about espers, but quickly defaults on that and pretends never to hear the word before. Nice try, old man. Terra, Locke and Shadow (Interceptor too, I guess cause he's standing in the cirlce) think something fishy is going one here - DUUUUH YUH THINK??? But no time to think on how useless this old man's mind is, as in walks his granddaughter. Oh for God's sake - She's joining us too?! Bluurgh, her name is Relm, and she's an amateur painter who captures the landscape in her numerous illustrations. She happens to take after her grandfather's bouts of ditziness, because she spills the beans about using magic to the party. She tries to change the subject by playing with Interceptor, who strangely doesn't eat her, and is ordered back to her room. Afterwards, Locke thinks there's something strange about Thamasa, but he just can't put his finger on it. Are you kidding me?! Relm just tells them that they can use magic, were they listening at all? That poor idiot Gestahl was dumber than he realises to send these envoys to placate the espers...

The Mog helpline tells us to stay the night at the village inn, so let's. According to the man wandering around outside, the innkeep will be a little more generous to us now that we have met Strago (Whip noise), so our rest will only cost 1 gil. Not good enough. I demand you pay me 1 gil for sleeping in this kennel! Speaking of dogs, Shadow will leave our party after so many hours of his time invested in our service, and will be gone come the morning. De-equip him of his shit, then talk to the fat-ass that runs this shack. That night, Strago runs in and shakes us awake. It's Relm! The little doofus has lit her house on fire, and we're obliged to help. Uhhh - give me five more minutes...

Shadow ain't helping us because he's a bit cruel, but Interceptor will (that means exactly nothing)! When you get outside, run to the building next to Strago's house to find it indeed, aflame. Speak to the old mage, who casts a useless spell in order to quell the inferno. The mayor of Thamasa enters the scene and declares that 'magic is forbidden!', dooming his daughter to a fiery fate. I guess no one in this town likes Relm? Oh, and Terra is like, SUPER surprised that Strago used magic. 'Magic?! OMG No Way!' Personally, I NEVER saw it coming. Everyone lends their magic of FLAMES BEGONE!, but they still can't fix the problem. Don't feel so bad - not everyone can be Gandalf, after all. Ultimately, Strago's going in, and that means we're coming too. 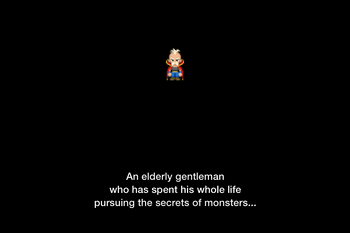 You Better have BURN Heal[edit source]

Inside the burning house, there are no random encounters. Instead, balls of fire move back and forth inside the rooms, and touching one will cast you into a battle with three or four Balloons. Strago's Aqua Breath Lore works exceedingly well here, as does Blizzara and Bismarck. They aren't too tough, but they can become highly dangerous if invited to use Self-Destruct. The blue mage can learn his first lore by witnessing its use (by the way, he just has to see the ability to learn it), but considering how strong it is, you can save that for later.

And the day is saved! Oh shit, we were supposed to be saving Relm. Where is this little scatterbrain? We find her, but before we can escape, the house starts to come down on us. Shadow appears to fight off five flames (which would be about 15-30 balloons in total - how the fuck he do that?) and smoke bombs us out.

Relm awakens later on, and Strago says that the secret is out. Locke finally pieces together the facts and infers that the townsfolk can cast magic. Damn... Fucking idiot... Strago takes an awful long time to tell you what I told you earlier in one sentence: They're descendants of magi! Sadly, the magi were hunted down Salem-witch-trial style, and now only a few people remain. Strago tells us where the espers might have gone: a mountain in the west. In passing, Shadow leaves, but not before Relm has to say a last puppy dog goodbye to Interceptor. How I wish he at least bit her.