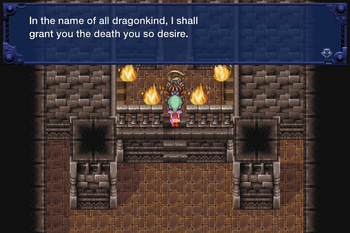 It's sad that I had to end the walkthrough on Page 41 instead of page 40, but blame the fucking Dragon's Den for being too long and complicated.

Kaiser Dragon, the superboss of Final Fantasy VI, lies deep within the Dragon's Den, which we have spent a good few hours searching in already. To get to him, two teams need to stand on particular switches in rooms that are located all over the dungeon. Once those two have stepped on, the third one will activate, becoming a tractor beam of light that draws the third party up to Kai's opulent suite on the top floor (What I like to think). Because the switches are so wide spread, it's going to take a shit load of time.

Organise your teams for deployment into this wretched cave once more. Party 1 is now are star players - they're the ones who'll be fighting the boss. For maybe the first time (unless you did so for Kefka), you need to put your best people all on the same team. I recommend at least two mages, but three wouldn't be a mistake either. Setzer, Sabin, and Gogo are great candidates too, and would round out the team nicely. It doesn't matter who goes in the next two teams, but you should put all your second best players in Party 2. This is just so that they have an easier time of navigating the dungeon to get to their switch. They aren't fighting the boss, but they sure as hell are fighting all the random enemies in this dump. Party 3 is good to go so long as it has Mog - with the Molulu's Charm equipped, they don't have to fight anyone.

Let's make a start of it, shall we? Take Party 2 through the right entrance and go right to the stairs that lead up to the Water Temple, where Blue Dragon was. Have them cross the water on turtleback to reach where Blue Dragon was, and walk them up to the save point through the centre door. Switch to Party 1 now, and have them take the same path to the site of Blue Dragon's murder. Take them through the right room (the one that leads to the Great Wall) and have them step on the dark square of floor. Switch to team 2, and take them up through the door that the other party has just opened for them. Sit them on the switch, and that's them done. If you put them any items, take them off - they won't be needing it any longer.

Take Party 1 all the way back to the starting room, and to the place where you killed Ice Dragon. This is nice, revisiting all our recent murders. Brings back good memories. Take these guys into the lava room (where Storm Dragon was) and take them southwest to step on the switch. Turn to Party 3 now, who shouldn't have to fight enemies at all and will have a very easy time of things here. Walk through the Den's left entrance, then move 'em through the right door. Follow the path to a stepping stone across the lava, then sit them on this switch, which will open up some more stepping stones for Party 1. Switch back to them...

Move these guys back to where everyone started at on the cliff. Enter by the left entrance, then take the left most door again. Run north as far as you are able, walk right a bit, then go south by jumping on the stones that Party 3 have made. Step on the pad, revert to Team 3, and take them north over the stepping stones and Storm Dragon's death site to reach the other side. Take them up the stairs here, then move them right to where save/reassembly room is. Change to 1 again and run them through the door, right (under where Earth Dragon used to be in all his pomp) along the hallway, and have them meet up with Party 3 in the room of saving and reassembly. Save the game if you must, then take them both east down some stairs to the floor below.

Take both your teams west, past the stairs that lead to Red Dragon's room, then south, then east, and park Party 1 on the first switch you see. Swap to Party 3, and take them through the gap that has been opened for them. Once you've stood them on their pedestal, switch to Party 1 and take them northeast to the room full of pushy train conductors in green. Walk north to the second save point/reassembly room, save the game and heal if you want, then run west through the door to get to the room with the bridges and the 4t weight in it. Walk straight left to find a switch; step on it, and transfer to Party 3.

These characters will be moved up through the door north of them, which also leads them to Party 1's location. Take them around to the block that Party 1 has provided, and leap across. Go around the block and north to a door, save again if you wish, and keep moving them forward to find the second switch. Take off all of their items, and switch your team around one more time.

With Party 1, the last one to go, return to the last room they were in. Dash past the save room, down three flights of stairs, go east, cross the bridge, cross another, leap across a few chests, and make your eventual way to the mountain that Skull Dragon used to sit atop. Climb the stairs that have since appeared in its side, then take the bridge here all the way left to a door in the wall. Up ahead is the final switch, which has turned into a teleporter. Here's where we'll prepare ourselves for battle. Give all your team the best items, Celstriads, Soul of Thamasa, Ribbons to avoid status attacks, and all the elemental resisting armour you can pile onto one person. Remove any strength raising relics or armour, since the boss isn't highly affected by them. Once you're ready to go, take Party 3 south to save (this is the last opportunity you'll get) then return and get Party 1 to step into the light.

I know this music! It's the Floating Continent all over again. I thought I'd never get to hear it again! Walk forward to find our guy sitting at the end of a hall, surrounded by flames for dramatic effect. He doesn't look too much like a dragon, does he? He comes from the same neighbourhood of the afterlife that Ultima Weapon and Ultima Buster both lived, meaning that he has the same irritating need to speak to us for way to long about how powerful he is, and how weak we are. The conversation is nothing truly special, no ridiculous plot dumping, and it gets boring too quick. Kaiser complains that humans are greedy, and shouldn't be profaning these sacred halls with our "filthiness". Beg pardon, but who the fuck was it who invited us here? I seem to remember him 'waiting for us' to come challenge him. He tells us off for slaughtering his brethren, and then again for "befouling" their rest with our continued existence. Look, you asked us to be here, and you made it so that you couldn't be visited unless all of your dragon's eight were dead, what was I supposed to do? After a timeworn Robert Oppenheimer-like quote, he attacks us for the sake of all Dragonkind. What a dreadful host!

Guy doesn't say a thing about being killed. What was all that about slaying us for all Dragonkind? I'm just gonna put it out there: I thought that Kaiser Dragon was weak so far as Superbosses are concerned. If Shinryu were still alive, he'd be spewing.

Walk up to find the final piece of magicite in the game: Diabolos! Summoning him will strike the target of 1/16 of their HP, regardless of instant death defence, and also inflicts sap. He teaches the old Graviga spell at x5, and the new Gravija spell at an acquisition rate of x3. Kind of a strange spell to be acquired last (I was expecting some apocalyptic shit like Destroy from Final Fantasy II), but oh well. What can you do? Gravija's still an excellent spell: it takes off 7/8 of an enemy's HP, and ignores instant death immunity. Against bosses, that will deal an almost guaranteed 9999 every time, but still doesn't break the damage limit. Diabolos also doubles HP with a 100% boost on level up. Suh-weeeeeeet.

Enter the portal, and you'll be removed from the dungeon. A little green imp by the name of Kappa walks up to you, and tells you about the game's final challenge. Uch, I am so over this game right now. When is it going to end? It talks about a shrine on an island to the west of Mobliz, so magical and mysterious in its presence that even landing there is destined to give you headaches and curse the very name of Squaresoft for the rest of the year. Better wait until New Year's Eve to fly over there.

So off to Mobliz, yeah? WRONG!! Kai's accommodations in the Dragon's Den have been invaded and squatted upon by another intrusive Superboss. Walk all the way back there (yep, you gotta do it all again) to confront the beast. Don't worry, I'll be coming with - someone's got to take a photo of this guy for the wiki.

Retrieved from "https://finalfantasy.fandom.com/wiki/Walkthrough:Final_Fantasy_VI/CylindrusAltum/Part_XLI?oldid=3214634"
Community content is available under CC-BY-SA unless otherwise noted.