Setzer gives the wheel of the Blackjack to the player, and we're finally given the opportunity to explore the world as we see fit. First though, we need to learn how to fly the thing. The airship flies in the same way as you can ride a chocobo or by simply walking - the eight-point compass will be provided to steer the ship in the direction you want it to take. The arrows on the right side of the screen determine the altitude you fly at, and the airship icon above that allows you to enter the Blackjack and explore the inside of it. This also grants you to opportunity to swap party members, heal, and buy sundries at the shop. To land the ship, tap it.

We're off to Narshe now, to see how things are. You'll be delighted to know that the people that weren't a part of your party to the Southern Continent have levelled up of their own accord, so there are no huge power gaps between playable characters. Personally, I chose Setzer, Terra, Cyan and Edgar for this next part. There are no bosses for a while, so Locke won't be an integral part of the party for a little while. If we do need his services, I'll inform you. Enter Narshe.

Walk up a bit and a guard will escort you the rest of the way to the Elder's house. This homeless guy called Banon is talking to us, but I don't believe we've ever met? Narshe has finally decided to throw their lot in with the rebel army. New plan - we need to enter the esper world to recruit some summonable creatures to our side, since we lack an army to storm the empire with. Terra's coming along, because only an esper-human mongrel can convince other espers of the need to band with humans. Scene's over, so now it's time to do some stuff in the town and its mines. First are the shops - Poison Rods, Morning Stars and Hawkeyes are available, buy what you can. The armour shops sells Tiaras and Power Sashes now, but the latter is 5000 gil - probably more than you'd like to obtain it for. Run along to that establishment south of old man Arvis's house, where that locked chest is. Enter, and a lone wolf by the name of Lonewolf will crack open the chest, claim its contents, then leave. Run outside, and go north to see him run off north. What are you waiting for? After him!

Run down to ground level and walk north up the main street to see the wolf flee again. Keep heading north until you enter the mines. Walk forward, but instead of going north like you usually did, take the first right into a cave you haven't entered before. Follow the straightforward cave to the outside, cross the bridge, and keep following the path until you're inside the caves again. Exit through the other side, then hike north to get to the next screen, the place where you fought Kefka and his no-account minions. From here, just keep walking until you get to the point where the Frozen Esper was. That evil lupine has taken a moogle at knife point, a most unspeakable crime. He tells you to back off, but we're not doing any such thing. Wait a moment, and the moogle will leap out of wolfie's grasp, knocking both himself and his captor terrifyingly close to the edge of the cliff. You now get a choice between rescuing the poor moogle or saving the wolf to get a Gold Hairpin. In my eyes, the crime for threatening violence on moogledom is punishable by a slow, painful death, so there's no way I'm saving that shiteater. Help up the fluffy white guy, and he thanks you for it. A talking moogle?! Cuuute! 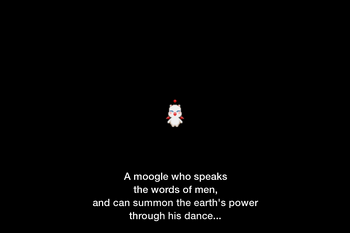 The Lone Wolf falls from the cliff, hopefully to his death, and Mog runs back to wait in the Blackjack. There's nothing else to do in Narshe (and for a long time), so follow your new teammate to the ship.

Lord of the Dance[edit source]

Since we have him, we might as well take our Mog buddy out for some dance lessons. You do intend to use him don't you? Of course you do! But to use him properly, he'll need to be able to learn some basic routines:

Snowman Rondo, the eighth and last dance, can only be acquired in snowy places, the only one being in Narshe. Since we can't fight enemies there anymore, we have to wait until later on to get this particular mosh.

There are a few things we need to do before heading off to our next engagement at the Cave of the Sealed Gate. First, fly to Tzen and enter the town. Behind the Relic shop in the top right corner of town is a thief who sells you the Seraph magicite for 3000 gil. I only mention it because because it teaches wonderful life support skills like Raise and Cura, but at a faster rate than Unicorn. The auction house is also open for business and has four espers on the block, but they're bloody expensive and I don't want to just throw my earnings away. Besides, we have plenty of other summons to help us level up, why not rely on them?

The next dungeon featured in the story is a cavern to the east and slightly due north of Albrook, on the Southern Continent. Between a narrow pass in the mountain is what looks like a single house standing before a bridge. Land the ship and walk inside. The entire place is deserted and this is completely, not at all suspicious. Walk around to take in the pretty sights, if you must. The house in the centre has four chests inside, but the room they're in is locked. What a wonderful surprise. Further inspection yields no interesting results: This place is empty. Walk to the stairs in the northwest corner, then walk around to some stairs leading down. When we return to the world map, walk east into the mountains.

Cave to the Sealed Gate[edit source]

There are six different enemies in here, three in the first few rooms, then another three in the lava rooms. The three you encounter at the entrance are Antares, Provoker, and Lich. Forget the first two - Provokers are the troublemakers. They have a 1 in three chance of countering any damage-dealing attack with Impsong, which morphs the attacker into an Imp. Esuna won't heal it, so hopefully you have a few Green Cherries lying around to heal the afflicted person. Another thing to notice is that these things are all undead, but lack the usual resistance to fire. They absorb it instead, so never think to use it at all when in this cave.

Walk right, down the stairs, and right again to a chest with an Assassin's Dagger inside. It's a great weapon to use, but not in this writhing snake-pit of the undead, which are immune to Death, but not getting beaten up and fading into the background. I never got that. Perhaps I won't ever. Yah, just don't equip it. Take the next stairs down, then look around the southwest corner for a chest containing the Kazekiri for Cyan. You might have already stolen this from No# 128, but if not, then Cyan can have it right now. You can also give your samurai the Genji Glove, and have him dual wield the blades. Take the other exit in the room to get to the first lava chamber.

The enemies here are Zombie Dragons (who defy the norm by being weak against fire again) and Outcasts (annoying creatures who use 'Lifeshaver', a terribly powerful draining attack that heals them, so kill the creatures first). Anyways, about the room. The bridges appear to be disconnected to your position, giving the impression that you can't walk across. However, if you walk left, then down to the edge of the bridge, the pattern of walkways will change, allowing you access to the middle platform. Once you reach it, the walkways will switch between the two setups every three seconds, meaning that you could be dropped into the lava, and forced to start over with a fraction of HP less than when you began. The idea is to run from bridge to bridge, stopping only on safe areas that do not vanish with a screen change. First, walk two steps south from the platform you're on when the bridge is whole. Then walk left one. Wait until the bridge reforms in front of you, then walk two paces to the left. Wait for the platform in front of the treasure box to appear, dart in to open it, then quickly step back before it vanishes again. If you fall in, don't worry - it's only like 10 HP. You get Heiji's Jitte for that, a worse than useless relic that changes Setzer's Slots to 'Gil Toss', a crap ability that allows you to throw gil away for a few points of damage. Never ever ever equip it. I'll know if you do. >8(

Return to the centre island. Walk north this time (avoiding the lava because you're a wise little hen aren't you?) and run for the centre of the upper middle set of platforms. When the bridge resurfaces, run east to salvation (and a chest with one X-Potion inside). Of the two bridges leading south from here, take the left one down three steps when the time is ripe. When the walkway turns into a little backwards L shape, walk south and west quickly. Here's the hard part. When the shift occurs, you have to walk south one pace, then east four paces, and south one pace again, and all in those three seconds. Then wait for the final bit of bridge to reform and take the exit.

Walk east from here, then south all the way down to a Hi-Ether. Return to the start, then walk down those stairs and follow the path under a bridge (the one you just walked over). Run south and climb up the slope, walk halfway across the bridge, and throw the switch. You fall down to a lower level, but a 'distant sound' indicates that the switch has another purpose... Now we can go left or right. West first, because the Western World is so much more awesome than the eastern world. After you eventually get the second Genji Glove (Yeyah!), return to where the bridge impolitely dumped you and go east and up to the other side. Head north to find two switches here, press the right one to fight a Ninja, which might give you some trouble, since it can throw scrolls and shurikens at you (like Shadow) for high damage. Blitzes, Tools and Bushido will work well against it like every other foe, so it shouldn't be too hard to handle. Also note that you can steal some Angel Wings from it, an as-of-yet unobtainable relic. We'll get some later if you don't get it here, so don't worry too much. Before dying, Mr. Ninja talks about not being able to claim all the treasure buried beneath a staircase. Treasure, you say?

Trigger the left switch to open a hole in the wall. Inside are a Tent and Save Point, one that I estimate you would really like to use. While you have a quick break, I'll write the next page up. See you over there!