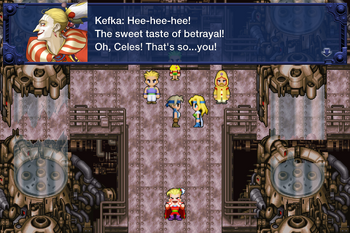 Continuing on from the last page, walk north from the garbage disposal area, and climb up various sets of stairs to get to the very top, and enter the next room, an area filled with stasis tanks. Walk left as far as the westernmost tank, then walk into the wall just next to it find a secret passage. Walk down a bit, then left, then face up and tap the screen to get a Stoneblade, a remarkable sword that can inflict petrification on an enemy. Then continue walking left into the next room. This one's nice and straightforward, but there's a man blocking our way through the next door. Politely ask him to step aside.

Move into the next room, and before you do anything, take all of Celes's items away from her. She'll leave the party soon, but doesn't think to give our stuff back now, or ever. In this new room, there are six espers creepily floating in their respective tanks. Walk up to the switch and free them, and the espers transform into magicite for you to take. Some guy overhears, and runs in. Say hello to Cid, recipient of Vector's worst dressed award ten times in a row. He investigates the now non-living magicite, and squanders the audience's time by telling us what we already now from Ramuh. Celes and Cid appear to know each other, and Cid starts to think that Celes only acted the part of the fifth columnist to apprehend the Returners. Kefka runs in, laughing as he does with that 16-bit cackle, and declares that Celes was only using them to get the magicite. He orders in two Magitek units, and the soldiers blast the party (except for Celes) into unconsciousness. They're just about to be killed when Celes pulls a warp spell out of her arse and teleports herself, Kefka, and the soldiers away. Where was this useful spell back in Narshe?

Cid rushes to see what happened, and notices that everyone is gone. Then the place starts to fall apart. Follow Cid to the elevator, and you all go down. He talks about how he regrets torturing the espers and decides to inform Gestahl of the needlessness for war. Hah! Good luck with that, idiot. Save when you hit the bottom floor. We now have some neat espers to sift through, and here's what they do:

The Iron Chancellor is surely the best - Raise is one of the best spells you could ever have in any final fantasy. Unicorn is neat, too. Set up your trio anyway you want (try to prioritise having Bismarck), then speak to Cid. Cid blabs about Celes being the daughter he never had, but is interrupted by the nefarious chortling of interrupty-pants Kefka, who obviously didn't go very far. Cid nobly chucks us onto the mine cart and pushes us off, starting a small mini-game involving a three dimensional shaft-run. It's a bit like the Lethe River. Random encounters will appear, all of them Magna Roaders, who have a paltry 400 HP, but possess scrolls and shurikens to steal that Shadow can use later on. After about the 5th battle, a different sort of enemy will approach:

The mine animation still continues, and the party finally emerge into the murky day(ish)light of Vector. They also kill a guy because hey, why the hell not? Run south from there to the end of the tracks, and Setzer rushes in to check up on us and take us back to the Blackjack. Oh, my hero! Kefka isn't letting us leave easily though - he deploys the airship's natural enemy, the armed cherry picker, to snatch us out of the sky. Oh, and Setzer joins the party. Better put that down somewhere, right? 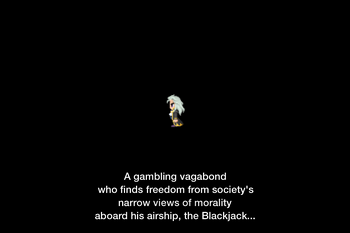 Without any further ado, a boss fight against those Cranes.

Now that we're free of Vector, it's time to check up on Terra in Zozo (why was she even in Zozo to begin with?). We don't get to fly there ourselves, but that will come soon enough.

Terra awakens with the help of some magicite, and begins to remember bits and pieces about her childhood, her birth, even events that she didn't bear witness to and therefore should not be able to recall. We get to control a sexy esper dude with green hair and horns, who is quite obviously Terra's father. Walk outside with him and speak to the blue-haired guy who comes running, telling you (Maduin) that a human woman has tried to get through the gate. Return with her to the village (There's no 'let her die' option) and she's put to rest in a house in town. Wake her dumbass up, and she introduces herself as Madeline. Maduin + Madeline = mad for each other? Is this how things work in FFVI? Cause in that case, Locke and Celes are never going to work out. Their names are just too different! 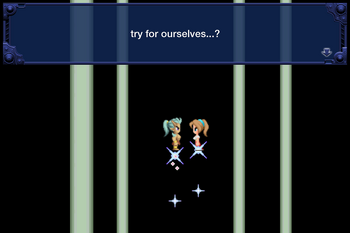 But anyway, Maddy is here because she doesn't like the human world anymore, and she thought she'd just invade this peaceful kibbutz for shits and giggles, unaware of the truth that she just made it easier for the Empire to find them, and therefore lead mankind to its eventual downfall. Good work, lady. Maduin sets out the next day, after Maddy has apparently taken her leave. Walk north to the cave, then beyond it in search of her. Slick Maduin puts the moves on Madeline when he finds her, and they dance together. Sometime later, a child is born. I... uh... did they just do what I think they did? Dancing makes a person pregnant? Well Celes danced with all those men at the opera, does that mean...?

Two years pass, and the empire strikes. Several espers are taken immediately (incompetence, I reckon) and the others retreat to the elder's house. Speak to the Elder there, who is willing to sacrifice himself to flush out the imperial invaders and form the magical seal that separates the two worlds. Madeline runs off because she was offended by a wolf-man, and leaves for the barrier with Terra. At the cave, run up the staircase to find Madeline. He starts to drag her back, but baby Terra bounces out the door behind her. Then Madeline goes, then Maduin. Gestahl is also here, and he abducts Terra when he finds out that she's a halfie. Maddy resists, of course, but she gets bitch slapped by the soon-to-be emperor. Maduin is taken to be drained of his life back in the Magitek Research Lab, while Madeline isn't seen nor heard from again.

Terra awakes in her non-trance form, having learnt to control herself from her father (the piece of magicite we gave her? the one containing Maduin's spirit?). Terra asks how Narshe is doing, and Locke suggests that we go back there to have a look. Now that Setzer is with us, we can travel there in style!

Retrieved from "https://finalfantasy.fandom.com/wiki/Walkthrough:Final_Fantasy_VI/CylindrusAltum/Part_XII?oldid=3214546"
Community content is available under CC-BY-SA unless otherwise noted.