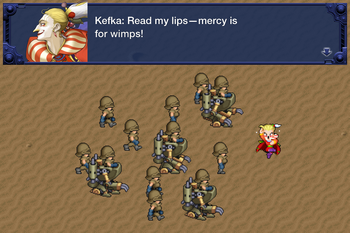 Gau has the capability of mimicking the strengths and weaknesses of many monsters (and even bosses) in the game. If a monster appears on the Veldt at any time, then that means Gau can imitate it. Firstly, how does one obtain a rage? By having Gau use the 'Leap' command in battle on the Veldt, Gau will jump into the air and disappear for a while. The battle you were fighting at that point ends, and Gau leaves the party. When fighting another battle (but only on the Veldt), Gau will reappear, though the time he decides to rejoin is uncertain. After returning, Gau will have learnt the rages of all the enemies you faced when he leapt, and will even learn the abilities of the current monsters you are facing when he jumps back, but only if you manage to defeat them. Does that make sense? I hope so, because I don't care to look over or edit my work.

How to use Rages is a different story. Gau doesn't have an attack command, only rage. By selecting rage, then picking the monster you wish to emulate, Gau will enter a Berserk state, one which he will not exit until he is KOed or the battle is ended. Bear in mind that Gau cannot leap when he is the only person left standing in a party, and cannot rejoin the team when there are four members currently fighting, or in a side/back attack. Also know that if you hit Gau by accident after he returns, then he will run off again, and you get no rages. When you select Rage as a command, Gau will use one of two attacks (50/50) consisting of a normal attack or an ability exclusive to the monster's Rage. During this time, Gau will inherit the status of the monster in question, gaining their weaknesses, immunities and absorptions.

That's all there is to it! Not too difficult, right? The only problem I can see is that here are over 250 enemies out there waiting to be raged upon. 250. If you have the collector's heart, then this should be an exciting new adventure for you. If not, then I'd stay the hell away from rages and Gau in general.

Walk south to some mountains, then west around them to find a cave centred in the crescent shape it forms. Inside, Gau admits that he's forgotten where the shiny treasure has gone, so we have to search for it. Walk west, north to a bridge, across said bridge, then south, where Gau will interrupt the group to dig up the item in question, a Diving Helmet. The group head outside with their new technology (apparently we can breathe underwater with it), and they jump into the raging river below. Soooo, if there's only one diving helmet, how are they all expected to breathe underwater? In the battle sequences, no one is even wearing it, so what was the point of this futile little turn of events? Did we have to have Gau with us to do this shit? I want Shadow!

Remember when we were controlling Terra and Edgar and Locke and Celes? Seems like an eternity ago, partially because this part of the story WON'T END. The Serpent Trench is just a quick contrivance of a passage that takes us back to Narshe, but it's quite similar to Baren Falls and Lethe River in that you have to fight your way through scripted enemy fights against weakling opponents. Along the ride, you'll be given a choice of left or right a few times, but the game will lend a hand and tell you exactly what you need to press. Illusion of choice, they call it. Who's 'they', you ask? Why the voice in my head, of course.

Go right once, and you'll wind up in an underground cavern. Take an X-Potion from the right, then return to the trench through the northern door. As you sail along again, choose the right option to find yourself in another underwater grotto. Follow the path north to another screen, walk around and past the pool, then step on the circular switch at the end of the trail. Walk down into where the water just drained from and step into the hole to fall down to a lower room, then climb up the stairs to a Green Beret. Use the south door from there and follow the path to find yourself back in the ocean landscape, which then takes you directly to the next town. 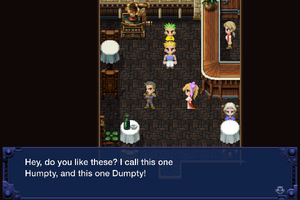 There's only a small amount to do in this isolated port town, but all the better for me, since I don't really like hanging around in settlements or such. They detract from the action too much.

Walk up from the harbour and enter the pub on your right. Talk to the waitress/slag here for an interesting scene with Cyan. This tart tries to curry Cyan's favour if you like, and with the help of her two business partners, 'Humpty' and 'Dumpty', tries to score Cyan the sybarite on the rebound. For shame. Sabin claims to be impervious to the wiles of the promiscuous dancer thanks to his 'Ascetic training', but I think we all know that that's a load of bullshit. You don't get anything out of this, I just thought it'd be a fun thing to see. The Weapon shop has a Mythril Spear to buy (for Edgar) and the Armoury has a Cotton Robe, but that's all for the shopping. Lastly, take to the inn and inspect the clock there to gain an Elixir. Now that we've done all the necessary stuff, go back to the docks that you washed ashore on, step onto the ship in port, and tell the captain that you're ready to depart for South Figaro.

WHOOO! HOMECOMING!!! I was so sick of the divisive party crap...

The Empire is right at Narshe's doorstep, but the pussy Elder won't lift a single decrepit finger to help us. Rest assured, if it was the Returners coming to wage war, these bastards would be ready to destroy us with an army of Narshe guards and citizens equipped with increasingly ridiculous weapons that could destroy the world 15 times over. But obviously they don't think to overestimate the martial ability of the greatest Empire in the world and its destructive, EVIL harlequin general. And where is Leo in all this? How is it that the one good guy amongst the antagonists that gets called away from duty is the only one with some tenderness and mercy in their being? Does Gestahl even know how fucked in the head Palazzo is?

Sabin runs in with Cyan and Gau to meet back up with Edgar and Terra (and Banon). After greetings are exchanged, Sabin tells everyone of how Kefka's inhumane deeds were responsible for the deaths of hundreds of people in Doma. The Elder still doesn't listen of course, the senile old prick, and believes that Narshe won't succumb to the same fate because of its neutrality. Well I'm sure that Belgium, Denmark, Norway and the Netherlands thought the same thing of Nazi Germany, but look what happened to them. Locke bursts in with Celes, who declares that the Empire is like, right outside the town. While everyone stands around wasting time with petty squabbles, a Narshie guard runs in with dreadful news: 'We're under ataaaaack!'

As that sinister merry andrew marches through the desert (well is he at Narshe or isn't he?), the Elder finally wakes his dithering arse up. The Esper (that thing from the start that killed.... Wiggs and Bedge? I dunno) has been moved to the cliffs behind Narshe, so that's where we make our last stand! YYAAAAAAAAHHHHHH! 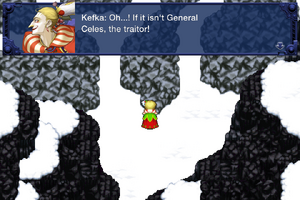 The party marches single file up to the battleground, with Celes wasting as much time as she possibly can by chatting with her teammates. She talks to Edgar about not being in love with Locke, talks to Terra about being a Magic infused knight (Terra's all like 'But can you love???' God - shut up!), talks to Cyan about not being a traitor, and probably talks to everyone else on the way. I'm wasting this damn page on nothing information, so let's just get on with the damn battle.

You need to make three parties out of our seven characters. THREE. Since we can't have two parties with four and three people filling them out, we have to instead split our people like this: 4/2/1 or 3/3/1. You can arrange them as you like, but I did it like this: Edgar by himself (Since he can target multiple opponents), Celes in one party and Terra in the other (So they both have healers), Locke and Sabin in the main party (that can be with Terra or Celes), and Gau and Cyan rounding out the other party. Okay, I confused myself, so let me just show you what I did:

Party 1 is our main force, since it contains the only person who can steal. Trust me, you want to steal often here, since most enemies have Mythril equipment to part with. Once the enemy onslaught begins (It's like that fight against the Guard Leader when you were defending Terra with the Moogles), you have to clear out all the enemies and take down their commander, Kefka. Also, Banon can't die. If the enemy reaches him, it's game over. He could have joined us to round out the teams, but noooooo. Finally, there's a save point above you to the right to use if you must. Let the games begin!

There's 12 enemy units overall, not including Kefka, and they're pretty weak. I'm sure you can handle them all so long as you can heal often. The types of foes you can expect are Corporals and Hunting Hounds: They all fall easily. The brown soldiers also have Heavy Armours and Fidors to kill, but they're not much harder. In fact, I managed to destroy most of them with only my first party! After you kill them all, (or technically, just walk past them), you can fight Kefka. You'll have to fight through his bodyguard first, the idiot running back and forth in front of him:

After the last line of defence falls, Kefka stands alone. Get ready for a boss fight, get the best team you have on the field (actually, the one with Celes would be best), and approach him.

His non-plan in tatters and his army in bloody chunks on the snow-capped mountain, Kefka storms off in a rage. That's just about what I expect from the military faction of Cirque du Soleil. The party gather around the esper at the summit, where the frozen bird-snake starts to glow. Terra starts to resonate with the creature, and transforms into a furry pink demon girl, before almost killing everyone and flying off in terror/fear/stupidity.

Later, in Arvis's house or whatever he calls himself, Locke awakens. The remaining party members gather to think about the next plan of action. Half of the group decide to stay in Narshe for plot convenience, while the others search for out lovely magenta esper woman, who's whereabouts are unknown. Choose four people to create Terra's Search party: I chose Locke for stealing purposes, Celes for healing, Edgar for Tools, and Cyan because he was the least levelled up of the remaining three. Choose who you will, (If you want to see an additional scene, bring along Edgar and Sabin when you get to Figaro, and if you leave a space, you can recruit Shadow again early next page) and I shall meet you on the next page. 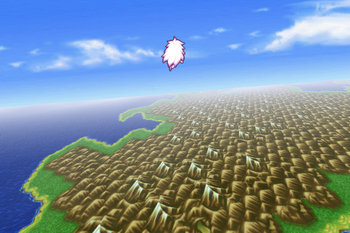 Retrieved from "https://finalfantasy.fandom.com/wiki/Walkthrough:Final_Fantasy_VI/CylindrusAltum/Part_VIII?oldid=3214540"
Community content is available under CC-BY-SA unless otherwise noted.