As you walk through the turnstile onto the platform, Sabin, Shadow and Cyan remark upon how strange it is to find a train of all things in such an inhospitable forest. Walk into the nearest carriage to be let in, with much protest coming from Cyan. After we enter, the samurai frantically warns that this is the 'Phantom Train' and that we must leave immediately. After the train jolts into locomotion, check the door to find it barred. At this point, a swarm of ghosts appear in the carriage, and attempting to speak to one will result in a battle against three ghosts. The other enemies found as random encounters on the train are difficult to take down in large droves, especially without a healer present. The worst ones are the Oversouls, who can use Insanitouch when alone to confuse one person, or Dread Gaze to petrify another. I highly advise that you kill those ones first; Clouds, Angel Whispers and Bombs are pretty simple to eliminate.

Proceed left from the first carriage and into the second. Walk up to the first ghost you come across. This one doesn't seem as evil as the others. 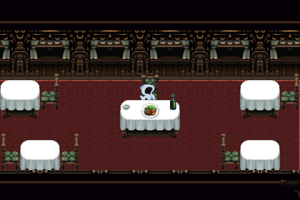 Exit this carriage through the left, then into the next one. Two steps in, another malicious wraith will block the entrance, so you'll have to force your way through it to get back outside (since this car doesn't have a second exit). The vengeful spirits will flood out of the cabin, forcing you up the ladder to the top of the train. Cyan and Sabin get an idea (poor neglected Shadow) to jump across the next car, putting some space between us and our attackers. Enter the area to the left to find that those persistent creatures are still chasing us, so we'll need a more absolute method of getting rid of them. Hit the switch here to detach the rear carriages (so long, assholes!), then run back in and hit the switch again to bring down the wall to your left. Use the save point here (don't heal up unless you really need to), then run along to the next screen over.

In the dining coach, sit in the centre seat to be served by a outwardly harmless ghost butler who scurries off once the meal is laid down. Looks suspicious to me, but tell that to the dullard in the seat. Cyan's got the right idea, but of course Sabin ignores him. Sometimes, I wish death on my own characters, even though they may be the best in terms of usability. Does that make me a bad person? The same thing happened with Tidus... 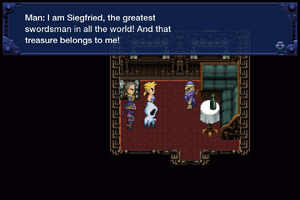 Sabin finishes the meal without dying, and it heals us (???). Well there's a lesson for all you young walkthrough readers out there. Always eat meals offered to you by sinister creatures in white cloaks, and nothing could possibly go wrong! The butler even clears the table for us! The fuck is going on? Additionally, if you speak to either of the two ghosts at the end of the carriage or sit down for another meal, they all speak to you in perfect english. Were those other spectres that chased us just mentally impaired? Maybe they have a *special* carriage for *special* ghoulies.

Okay, exit the way you came in, walk around the outside, then enter from the left half. On this side, you can access and open the chest here for an Earring. Leave, then walk into the next car over. Enter the first door here and examine the coffer for a random, totally superfluous turn of events involving Siegfried, a 'famous' thief who's so irrelevant that even the ghost in our party would think he's a useless character.

That shit runs off with the treasure after his humiliating arse-kicking, and everyone just stands by and lets it happen. Oh, but we do get a Green Cherry for winning! Bah! A pox be upon you Green Cherry! Move on to the next carriage, where an out of place human serves as conductor. Speak to him (it actually seemed to me that he was trying to avoid being talked to) to get an unclear piece of advice on how to stop the train. Enter the left compartment door here to find a room with four chests. The first three from the right contain two Phoenix Downs and a Sniper Eye (wielder can't miss), while the first on the left contains a Hyper Wrist guarded by the dangerous 'Apparition', which boasts 1500 HP, a powerful lightning attack, and is everything that Siegfried wishes he was when he goes to sleep in his hovel every night. If you haven't got rid of it yet, ??????? is useful for eliminating the mini-boss in one hit with possess; you may as well, seeing as the Apparition will probably kill it anyway with its brutal attacks.

Next carriage is a save point room, and the one after that is our goal: The engine. Once inside, switch your team to the back row if you haven't already, hit the right and left switch (not the middle) and climb onto the top from outside and flip the switch located near the smokestack. The train jolts into life, and gets a bit miffed at all our antics on board (which include slowing it down, slaughtering some of its ghostly residents, and letting loose half the fuckin' train and leaving a host of phantoms to exist in limbo for all eternity). He's got the shits now, and those rail wheels won't stop a-turning until they've got freshly squashed cadavers lodged under them.

The train decides to let us go, and the iron horse screeches to a halt. The three/two in our party get off, but it seems that some more trainers are queueing up to get on. Cyan recognises his deceased wife and son, and realises that the departed people of Doma are boarding for the afterlife. There's a really heart-wrenching scene here where Cyan runs after the train carrying off his loved ones to the next world, and they give him a final farewell before leaving him behind forever. Cyan's still maintains his composure, despite the grief, and as the party stands behind on the platform, the screen slowly fades to back...

So after that dolefulness, it's time to be merry again! We wind up outside the forest, on the other side of the mountain. Shadow will be leaving shortly (no, it can't be helped), so strip him of everything he owns because I don't know if you can get any of that stuff back. Enter the cave to your east, then walk outside to find a large cataract overlooking the south end of the continent. Cyan tells us that beyond the cascade lies the Veldt, a large plain filled with a great number of ferocious beasts, with the small village of Mobliz lying on its eastern verge. So we're about to jump over when Shadow says that he's fulfilled his purpose, and runs off. NOOOOOO! SHAAADOOOOW! Ah well, not much we can do about that. Perhaps he's afraid of water? Or heights? So jump over the falls with just Cy-cy and Sab-sab, and a string of scripted battles will commence. Most are against these fish enemies called Opinicus Fish who are quite weak, most of them dying in but one hit, but after about 10 of them fall their leader, the Rhizopas, comes out to play. This monster is especially brutal if you take your time in defeating him, since he won't be letting up with powerful physical attacks and special abilities. so try to make quick work of the job with Raging Fist and Fang. Hopefully, it won't use it's wicked 'El Niño' skill, which can do up to 250 damage on both characters. Apart from that, it has a weak physical and a Megavolt counter (about 80-100 damage), which should be manageable enough with potions an Hi-Potions an et cetera.

CyBin land at the bottom of the falls (still alive? 'Cause we were falling for a looong time), and a wild child dressed in furs and pelts comes to our rescue (actually looks like he's checking to see if we're dead or not but okay) before high-tailing it out of there. Now that we're at the edge of the river, we can finally make the long journey across the plains to the village of Mobliz.

The Veldt is an fascinating place to visit in FFVI, as it contains every enemy that you've ever faced before. There's a special significance to this, but it will only be established properly in the next 10 minutes. So just take yourself to Mobliz so that we can continue the story, alright? You might see the vagrant (named 'Gau' now) in a battle, but he can't be defeated. He just runs away. Are you in Mobliz yet?

Your first action in this is to heal, but you don't need to spend precious gil at the inn to do that. Rather, walk up to the Relic shop in the north of town and sleep in the bed in the back room for free. Unfortunately, there's no relics to buy here of any real value, so leave, go south, and enter the building with carrier doves hanging around outside it. Examine the clock here to get an elixir, then make your way to the armour/weapon shops. The only new thing to buy here are Iron Helms and a Kotetsu for Cyan, though you should also get the Magus Hat, since the inventories are shared between different parties, and Celes/Terra will certainly benefit from them. Now for a small sub-plot. Head to the only other house you haven't visited to find a bed-ridden soldier that was wounded in the Siege of Doma. He has a girlfriend back in his hometown of Maranda, who has written to him only recently. Give him the envelope on the desk, and he laments that he can't pick up a pen to write a love letter to her. Walk next door to the mail service and ask the guy there to deliver a message (it costs 500 gil). We'll revisit this place later, but just keep it in mind for now. Last thing to do before we hurry off is to buy some Dried Meat from the item shop. After you buy some, leave for the Veldt.

The idea here is to fight a battle with some enemies, and after they all die, Gau might appear. With our dried meat at the ready, toss some out to the kid (Don't hit him!), and scene of sorts will start. Sabin and Gau perform this bizarre dance routine that involves jumping all over the place with no rhythm (We in Oz call it 'Gabba'), and all this stupid shit happens that I don't even know how to explain without sounding like a fool. So just ignore all that and come back to reality when Gau gives Cyan his new name (Mr. Thou - sigh), and joins the party with the intent of giving the two a **shiny** present in thanks for that delightful meal he was just offered. Na-ah, that cutscene was too fucking long SE! 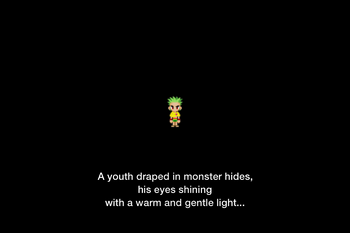 Too much space taken. Next page, please.

Retrieved from "https://finalfantasy.fandom.com/wiki/Walkthrough:Final_Fantasy_VI/CylindrusAltum/Part_VII?oldid=3214533"
Community content is available under CC-BY-SA unless otherwise noted.