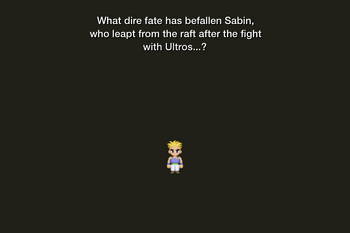 Sabin's dumbassed exploits from the episode in the River Lethe have landed him on the wrong side of the continent. Instead of heading west to Narshe like Terra and Edgar, now he has to go all the way around to get there. Fun. Obviously, this is going to be a long sub-quest. Walk into that H-shaped building next to you and speak with the dark-clad gentleman standing by with his dog. He volunteers to take you to Doma Castle, which acts as a checkpoint towards Narshe, and all you have to do is click yes to get another new character! 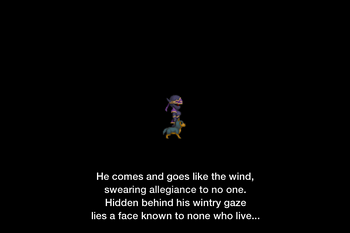 Talk to the man on the chocobo to buy some stuff, if you want. You can buy loads of shuriken here if you want to make use of the throw command; Square Enix have been highly merciful for once, selling them off at a mere 30 gil apiece! You could buy a full set of 99 for just under 3000! Your game, though. You do what you want. You should get some potions though, since we lack a healer. Walk east, then south over the wide plains to come across a patch of sand before a bridge. Walk into it to arrive at the Imperial Camp.

Note: Shadow may arbitrarily leave at any point after this area is completed, I.e after we have another character in the party with us.

As we arrive, we overhear a conversation between soldiers A & B: They hear whispers that Kefka is plotting to overthrow General Leo in a bid totake over efforts to seize control of Doma castle. I don't know what significance Doma holds to the empire, but I suppose it just has to do with total world dominance and a supreme takeover of every village, castle and settlement. Kefka himself comes onto the scene, being a douche to his soldiers as they stand guard, watching his ragtag ass. A captain stamps up, and tells the two that a storming of the castle is about to take place. The actual assault is a laughable mess, with Imperial troops running into the walls and each other in their effort to breach the walls of the castle.

Somehow, the inept guards of Doma can't keep these imbeciles out, which made me think that maybe they should be poisoned. Thankfully, the only man with sense in this damn place takes this moment to march in, claiming that the battle is not yet lost. His name is Cyan, and he's soon to be joining our party. 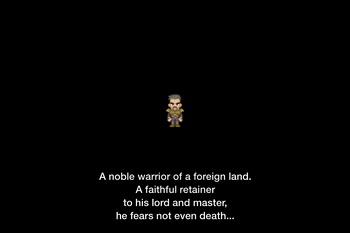 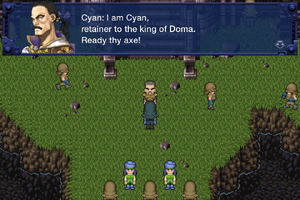 The ever so honourable Cyan decides to meet with the commander on the field of battle and eliminate him in one-on-one combat like a true badass should, theorising that the armed forces under the general's employ will break and scatter without a leader to guide them in battle. I don't know how the fuck it happened, but it looks like the enemy is... dismantling the castle? And some are running back and forth like utter twats. How are the Domans losing?! When you gain control of Cyan, run straight for the commandant - the small fry only give off a smidgen of gil and no EXP.

Kill the captain (No boss music, no boss template), you get a black belt for winning, and all of his little subordinates piss off. Cyan orders everyone inside to wait out the Imperials from within the protection of Doma's walls. As Shadow/Sabin again, enter the right tent and kick open the chest to get a Star Pendant, which prevents poison. You'll have to fight through three Dobermans to get at it, but Raging Fist and Shurikens should be plenty powerful enough to rip through 'em. The left tent has nothing, but the guard standing outside it can be fought for EXP. Cross the bridge, and we'll get our first glimpse of General Leo: a humanitarian at heart who would prefer that as few people as possible die in the siege of Doma. Unluckily, Gestahl has summoned Leo to the capital city of Vector, and by some laws of precedence, control of the armed forces goes to Kefka. I have a good feeling about this.

You eventually confront Kefka, whose just about ready to go with his plan to poison the people of Doma's water supply and kill everyone in the castle. After one hit, the jester will just run away, leaving you to chase him through the camp. After you fight him the second time, turn north and enter the tent above you. The right chest holds a Mythril Glove, and the Left one holds a Green Beret, but it's guarded by a monster: The Satellite. This foe is rather hard to take out at lower levels - it calls for guards for every certain interval of time it isn't defeated, can use Scintillation to blind the team, missile to reduce their HP by 1/4 and inflict sap, and also use Dischord, which halves Sabin's and Shadow's levels. Eliminate it by using Shuriken and the strongest blitzes you have (it counters with Mega Berserk, but hitting auto will overcome this) to claim your prize. 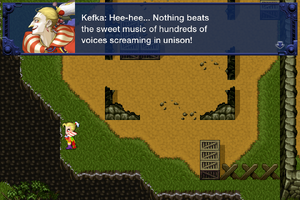 Equip everything of worth on your team, then confront Kefka once more. He commands a quartet of guards to kill you, but they're easily beaten back with the usual battle techniques you've been using up to this point. Meanwhile, at the riverside, that crazed loon of a general has dumped a huge load of poison into the water, and almost everyone in the castle (Imperial prisoners included) is instantaneously killed. Are they breathing it in or something? As Cyan, run to the throne room to find that a fate similar to the sentries outside has befallen the great king of Doma, and he dies. Exit the throne room, turn left, and enter the room in front of you. After finding the corpses of his wife and young son, Cyan loses his fucking mind and starts butchering people left and right. Don't want him to have all the fun do we? Run up as Sabin and help out with the killing. After three battles, the company of three make for the nearest suits of Magitek Armour (Where were these when they stormed the castle?) and make their way out of the camp. Cyan acts like he doesn't know how to control the thing, but I wager he's just pretending not to be fully aware so that he can mow down every last person he sees and still call it an accident. Make your way back to the entrance, slaughtering everyone who dares cross your path.

When you finally exit the place, save. Remember, we're trying to keep Shadow with us for the time being, and it's a long way back to the last save. Walk left past the bridge, then south, right past another bridge, and south again into the forest between the mountains.

You can't save whenever you want in here, so the danger of losing Shadow becomes ever greater. Unless you enjoy the idea of starting over from the beginning, then you better pray that the mercenary doesn't leave during this trek through the woods. With regard to the enemies found here, there's a lot of undead enemies, so techniques like Sabin's Aura Cannon work wonders. The others can throw shit and use sword techniques, or whatever you want to use.

Walk right through the trees until an opening presents itself in the shrubbery. Take it to find a lake, which doubles as a recovery spring. Move on again from there to find the third area, where the maze begins. You can walk either up or down here; the downward path loops around to the start of this godforsaken forest, so take the upper path instead. In the next area, walk east until you see a train looming in the background. Take the path up here to find our next dungeon, the Phantom Train.

Retrieved from "https://finalfantasy.fandom.com/wiki/Walkthrough:Final_Fantasy_VI/CylindrusAltum/Part_VI?oldid=3214532"
Community content is available under CC-BY-SA unless otherwise noted.