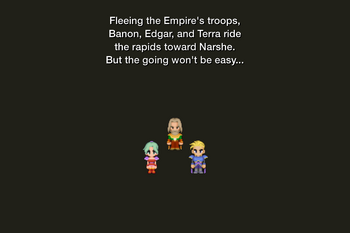 Walking up through the main streets of Narshe will result in being repelled by Narshie guards. We need to get to that Old Man's house, but the only way we can do that is by using the secret entrance that Locke used a while back (To the left of the school). Enter after the scene and walk through the mines until you come out into the mountain side. Take the upper path and follow it all the way to a room with a light in it. This light will then take a very particular path through the rocks up ahead that you must follow to reach the end of the room. If you step out of line even once, then you'll have to do it again. I don't need to be more specific than that, right?

In the next room, keep on walking until you get to that place where Terra fell from the ceiling way back when. Take the door to get to the place where you fought the Narshe guards with the Moogles, then head up. In the next room are the eleven moogles I just spoke of, running around like idiots. Walk up, then left, and move to the left side of the room, where a Rune Blade awaits in a chest. Any character can wield it, but it drains MP from her to deal consistent critical hits. If you favour Terra as more of a fighter than a mage, then use it. Remember, so long as you have Banon in the party, you don't need a healer. The better option is to give it to Edgar, since he doesn't even have MP. It won't give him critical hits, but that's fine because it's a powerful weapon all on its own.

Take the door southeast of you, then once outside, go down across the bridge and further south to exit the cave. Reminder not to open those chests, by the way - you'll be rewarded with good shit later on if you don't open them now. Once outside again, cross this bridge and enter the Old Man's house. Discussion time with 'Arvis', and the chapter ends. Very short. Locke's up next. 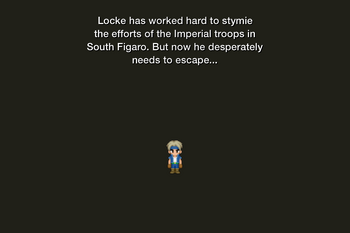 Locke up your Daughters[edit source]

Locke has fucked up his little quest to delay the Imperial forces from leaving South Figaro, and now he needs to get out. There are plenty of soldiers blocking off exits to the town, but we can't get passed them, since they just end up kicking our arses and sending us back to square one. We need to be super stealthy about how we conduct ourselves in this place.

Firstly, equip Locke with some items, since the fool has decided to strip himself for some reason. Head left from the starting position to find some stairs. Climb those, then climb the next set instead of entering the door. Enter the item shop in here to find a merchant in the back corner, standing next to the clock (which doesn't even have an Elixir for us). Talking to him will inexplicably start a fight, in which we have to steal from him in order to thieve his clothes (you might also get a Main Gauche). After Locke does a quick change routine, the half-nude merchant will flee from battle in shame. Serves him right! Exit the item shop with your spiffy new ensemble, then climb down the first set of stairs. Enter the door here, then go down the very next staircase you see. An obnoxious little brat stand in our way, and only moves aside if you're dressed as a Merchant. After he moves his ass, go north and exit the building. 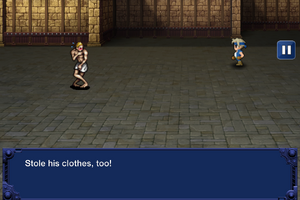 Now we need to upgrade our gear again. Walk up from that last building and move right past the mill to come across some stairs in the back wall. Climb up, then head left and eventually south to find a belligerent guard decked in green. Steal his shit, then walk back down to ground level. Walk left from the mill to find a guard standing by some boxes; speak to him to relieve him of his post, then scoot past the place he was blocking. Enter the pub here and walk down the stairs next to the counter. Talk to the merchant down here to re-steal the appropriate costume (you might also get a Plumed Hat), and Locke will obtain some cider afterwards. Now we need to get back to that house where the little kid was blocking the way.

Exit the pub, backtrack past where that guard stood next to the boxes, then to the mill, then south to the building. Move the brat aside again, climb the stairs, and head for the old man in the back. We give him his cider, but the dumbass old man can't remember what the password is that will allow the little shit of a grandchild to let us pass into the secret tunnel beneath the town. Tell him 'Courage' (don't know where he came up with that) and enter the passage he makes for you.

On the other side of the tunnel, examine the clock to claim another elixir, then walk up the stairs to arrive outside. Enter the door (There's an item in the barrel, but we're waiting for doomsday, remember?) and climb up some more stairs. Enter the first door on the left to find the traitor, a man who sold out his precious village for money. Dirty bastard! He doesn't have much to say though. What we're interested in is the left side of the room, where you will start to hear the wind blowing through an invisible entrance. Check behind the bookcase to find some stairs leading down, then walk down some more. Locke is prompted to remove his disguise (you don't have to), and then go straight down to find a hidden area. Hug the wall going right and down to arrive in B2F, a dungeon area with a Hyper Wrist and Hermes Sandals up for offer. Hyper Wrist simply increases strength, while the other casts haste automatically: I'd put it on Locke just so he can steal more often. Return to the previous floor and go right.

Locke peeks through the door to find some soldiers beating up a poor defenceless woman: Celes Chere, General of the Imperial Army. She mentions that she's lost her faith in the Empire because of madman Kefka's plot to poison the water supply of Doma (Sabin's Tale) and kill all of its inhabitants. As Locke, walk into the cell, past the sleeping guard (how did these fools capture a small town, informant or no?) and wake up sleeping beauty. 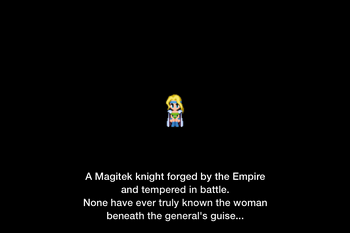 Saddle up Celes with all the equipment you can, then steal the key from the lackwit guard. Ignore the 'stealing is wrong' bullshit - I say beating up women is wrong, so this guy is lucky that I don't dash his head against the bricks. Exit the room, then go east to the next room to find a save point. Over one room is a hoarder's paradise, filled with a cluttered array of junk. Search around for three lots of gil totalling 3000, then approach the northerly clock and agree to wind it to reveal a secret passage.

This new area is filled random encounters comprised of three lots of Commanders. They're pretty easy to take out, but you should try eliminating the last two together, for individuals left standing will use 'Desperate Strike' for around 60 damage. Remember, you have a healer now, so rely on Celes for curing if you're starting to run out of potions. There are also Vector Hounds milling about, but leaving them alone will only force them to flee. The layout of the floor is quite difficult to traverse easily, because it's filled with hidden passages and overhanging ceilings that obscure our view. Listen to my instructions very closely to avoid getting lost in here: Walk east as far as you can (under the first ceiling) to hit a wall. Go south from here to get some Iron Armour (Equip that on Celes), then go back up and east.

Here you will find two chests sitting tantalisingly close, lingering just beyond our reach beyond a solid wall. Go up, then east and around to the two chests to get a Heavy Shield and a Great Sword (Both excellent for our former General). Walk back to the other side of the wall and move around to the south to find a hidden passage going down. As you go down, try moving left with every step you take to find a secret path that heads west, then south, to an isolated staircase. Once you go down it, walk south to get to a Hi-Ether, then look around the other side of the dungeon to find an X-Potion. Just beneath the X-Potion is another box, hidden from sight by the wall. Open it to find a Ribbon, an accessory that Final Fantasy is famous for. It's an amazing relic that prevents the holder from being afflicted with any status ailment. And this early, too! Mon Dieu!

Return to the last floor, go back into the secret passage, and emerge from the south this time. Go down as you are able, then left to find an Earring, (magical equivalent of the Hyper Wrist) then right to come across a staircase. At the exit, Locke and Celes talk a bit, then leave. We can leave now, but notice how the only thing holding us back from leaving from the beginning was that stupid soldier running back and forth down the side of Duncan's House. Ass.

Okay, we need to get back to Narshe, and the only way to do that is by moving through the South Figaro Cave. Nothing really interesting here except a few new enemies, and the chests have also changed their loot. We want to avoid them still because they can change once more for the better, so don't go fishing around for them, okay? Once you get to the Healing Spring, remember to USE IT (Hi Turtle!) before moving south. At the exit, the duo is ambushed by a machine, but I don't know what for.

After victory, Locke and Celes exit the cave, Narshe bound. Next time, it will be Sabin on the chopping block. Join me, won't you?