A Flurry of Fists Edit

The area that lies before you is quite linear, and gently twists around in a helical pattern. At the bottom of the valley, Vargas, that guy that you've heard so little about, blocks the way out of Mt. Kolts. He's freaking paranoid, I tell you. He thinks Sabin has sent us to kill him or something, and instead of waiting for answers, he decks us with a quick jump from a mountain ledge.

Poor Vargas dies, and so too does our short-lived memory of him. Moment of silence... Character time. 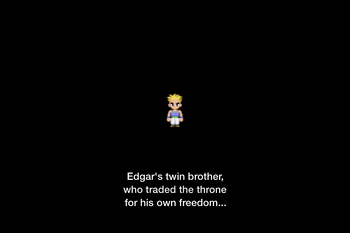 There's something I just learned about the Blitz system that makes things even EASIER. The AUTO feature (Those two triangles in the top left corner) will speed up the battle and cause each character to repeat their previous action. If you correctly pull off a Blitz, then hit auto, then Sabin will repeatedly use the same technique over and over again without fail! Cool, yes?

So I guess Sabin didn't even notice the people he was rescuing until after the fight. Did he really want to kill Vargas that bad?Also, Locke can't tell that the two are twins when it's completely obvious, and Terra's even worse - she can't tell the difference between bears and humans! These people have their uses, but damn are they dumb.

After everyone gets the good sense to shut their mouths, head east into the cave that Varvar was guarding. Grab the Tent from the chest here, then leave through the entrance.

Walk up the valley (Equip those Mythril Claws on Sabin if you have 'em) until you come across a path leading into the eastern mountainside. Welcome to the stopgap home of the rebel army. Speak to the guy that looks like a 40's pilot to be lead into the cavern. Walk into the room above you, save if you feel it to be necessary, open the chest near the bottom for a Hi-Potion (I don't know why they've stopped with the possibility for item changes all of a sudden), then speak to the guy standing to your left.

This is Banon, a lion-maned tramp who also happens to lead the resistance. It's looking really good for the rebels right about now... Anyway, Banon has been searching for Terra for the purpose of exploiting her powers for use against the Empire, which is kinda who we've been fighting the last few hours. Banon prophesies that Terra is the chosen person to deliver the citizens of Balance from the iron grip of Gestahl, and one Pandora's Box reference later, Terra awakens in a separate bed chamber. Speak to Locke, who will complain a bit about the Empire (we've all got problems...), and Terra jumps in, thinking that she ought to complain about something too. Take the Phoenix Down from the chest, then exit the room. Turn left, then walk over the bridge above you to get to a new area. Up here, there are three chests for you to loot, and they contain the following items; An Air Knife (Great Locke weapon), a Phoenix Down, and a Knight's Code (That unpredictable Relic from earlier). Hmmm. Guess I should have advised you against buying that relic earlier. Oh well! Take an Ether from the top pot, then search around the right side of the room (near the crates) to find a hidden passage that leads to the White Cape relic. It prevents Imp and Silence, sooo it's not that useful. Unless of course, there's a battle it would work well in, and in that case I'll tell you about it beforehand.

Return to the place outside Terra's room, then walk south and east into a common room-style area. Check inside the pot next to the suit of armour to find a Green Cherry, then walk south into the inn to get a free rest. To move the story along, you first need to talk to the Super Figaro Bros. (I wonder how many times that jokes been made?). Speak to Sabin in the main room to hear about how we should trust Edgar, then speak to Edgar in Banon's room to hear about how Terra should join the returners. Finally speak to that guard by the southwest exit (the ONLY exit) to be let out, then speak to Banon again. There's a short little exchange here, the first of a few that will get you different items depending on the actions you take and the words you say. Banon will ask Terra if she will join the Returners. If you answer no, she'll walk back inside. If you say 'no' three times in a row, you'll receive a Genji Glove (Relic that allows you to dual-wield), and if you say 'yes' at any point, you get the Gauntlet (Use both hands on one weapon to increase damage). I think the Genji Glove is a bit better, or why else would they make it harder to obtain? Do you think that any person playing this game would be so stubbornly persistent in declining to join the obviously good guys? Saying no three times will also get you a different scene with Terra (She complains - surprise!), and Banon gets increasingly shitty with her.

A soldier runs inside and collapses, and with his last breath, warns that South Figaro has been taken, and that the Imperial Forces are on the march. Edgar suggests that 'someone' has to sneak into South Figaro to slow down the enemy, and that person is Locke. What! How is one person going to slow down a fucking army? Besides, shouldn't they have left South Figaro if they're 'on the way'? This smells of bullshit to me... And my fears are confirmed, of course, when it turns out that Banon is joining us to replace the recently discarded thief:

Stick Banon in the back row (because he can't take a hit) and walk down towards the raft waiting for its occupants. Could they not even afford a bloody boat? Also, if you want to control Bano for whatever reason, then put him in as your party lead now.

I didn't know this until Banon just said it, but apparently we're going to Narshe. Why back there? Won't everyone try to kill Terra? Blah, I don't know anything anymore... 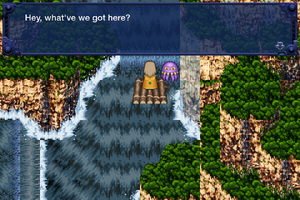 Fun facts about the river and this next leg of our voyage:

Thanks for that Banon, real nice. If he falls in battle even once, then you get an instant Game Over. Won't Phoenix Downs work on this fool? Maybe everyone is strangely inspired to kick his lifeless body off the raft whenever he falls. It works, doesn't it? So yeah, just make sure Banon lives to see the end of day. Have him pray every turn, and you can't lose.

When you get to the first intersection in this place, choose whichever - they all lead to a save point. Heal and save if you really feel the need, then off you go again. At the next split, go left to arrive at a second save point. I highly recommend using this one, since there be a boss fight up ahead. Put everyone in the back row for now, since Magic, Pray, Blitz and Tools ignore row damage restrictions and lessen the damage your characters will have to endure. Jump back on your magical flat boat down the River Lethe, fight through some more enemies before something really stupid happens. Meet Ultros, the game's resident comedian! (*Cricket chirps*)

Ultros is quite the perverted octopussy, and tries to snag Terra's octopussy (oh that's really bad...) for his decadent disports beneath the water. Sabin decides to jump in after him because he's a halfwit. Sabin gets thrown out of the water, but Edgar, his own brother, doesn't seem to care. 'Fuck that idiot!' I seem to recall him saying.

We get to choose we want to play as for the next few hours, the choices being the following parties:

Terra's is the shortest, so why don't we do that first? As Mog, walk up to any person whose story you want to do, and speak to them. You can also save if you want. I don't care what you do - It's all relative.

Retrieved from "https://finalfantasy.fandom.com/wiki/Walkthrough:Final_Fantasy_VI/CylindrusAltum/Part_IV?oldid=3214523"
Community content is available under CC-BY-SA unless otherwise noted.