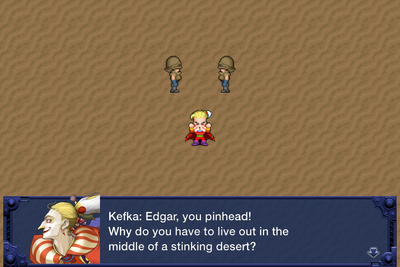 In marches Palazzo, bitching about subordinate drudge work and the woes of sand-on-boot mingling. He marches up to the castle gates and smacks aside the guard, and we get to control Edgar to confront him. Just walk up and talk to the guy for a scene. Edgar lies about Terra's whereabouts when Kefka asks for her, and sends them away with some choice words. Kefka won't be spared his experiment however, and delivers a cold threat before backing off. After the Imperials leave, walk up to Locke (just north of you) and have a chat with him. After the scene ends and you're with Terra again, follow Cole south and right into the library, then find the stairs in the southwest corner of the room. Once outside the castle again, walk to the eastern isolated building and speak to Locke, who reveals that Edgar isn't truly a loyalist to the Empire, but an affiliate of some band of brigands called the 'Returners'. Terra is shocked (because she used to be an imperial soldier), but can't decide which path to take now that she's given the opportunity to think for herself. Tut tut, stupid woman.

Elsewhere, Edgar awakens from a deep slumber (he said he was speaking with the Chancellor!) to find something quite wrong... The bleedin' castle's on fire! Thanks to the efforts of Kefka, of course. Speak to the guard standing on top of the stairs behind you, and in floats the clown to gloat about his victory. Edgar escapes on chocobo-back with Terra and Locke, and initiates 'Dive-Mode', making the whole castle drill into the sand like an enormous stone corkscrew. Kefka has the shits about this, and orders to Magitek riding soldiers to capture and kill us. Bawss time. 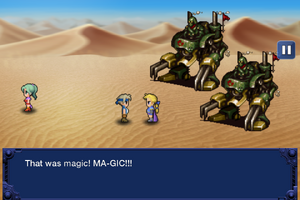 After creaming those two, the group goes for a victory lap around Kefka, probably flipping the bird as they ride past. Edgar and Locke convince Terra to meet with Banon, the Returner's leader, so they all head out to South Figaro, which lies to the south.

We get to ride on a chocobo now, hooray! It turns the map all flat and weird though, so it makes navigation a little difficult. Ride south to the mountains, then search for a little cave in a small notch by the sea. Dismount, then enter.

The enemies in this cave are of the usual assortment - now that we have Edgar's tool ability, they'll fall like the rats and wolves we were killing only a while ago in Narshe. Locke I had use the steal function every turn, so that I'd get a modest supply of potions for the road (to take the burden off Terra). Also, there are three items in this cave, all with items that will change at a certain point in the game. I'll let you decide if you want to take the items now, but from this point on, I'll make the effort to tell you about every item that the chest will hold in its life, regardless of its current contents. I will list the future item in Bold and in Parentheses. Pick up the items as you see fit or don't, but if I mention an item that you probably will want in the future or at present, I advise you to listen.

Walk straight up to the water and heal in its therapeutic shallows. Wave hi to the turtle. Hi turtle! Follow the path to the next area. It's a little complex here, but still super easy to navigate. Go left from the intersection and climb those stairs to find a bridge. Cross it to find a chest with an Ether (Thunder Rod). Go back down to the intersection, then turn east and keep walking until you get to a two-way split. Go east to find an Ether (Also an Ether). To the left are two staircases. Take the left one up to find an eventual Phoenix Down (X-Potion). You might want to avoid getting this as X-Potions are rather hard to come by, but it's not that important. Go up the other stairs now, and follow the cave out to the exit. Easy.

Directly South and East of the cave is the modest town of South Figaro, where our journey continues. Look at the barrel next to the Chocobo stable for a Potion (Holy Water), then examine one of the boxes behind it for a Green Cherry (Tent). Southwest of there along the harbour-side is a crate with a Gold Needle (Elixir), so you best leave this one alone for now. Walk along the harbour to some boxes, one of which has some Eye Drops (Remedy), and a barrel which has an Antidote (Tent). Walk north to the Weapon and Armour shops (There's a Potion [X-Potion] wedged between the buildings), then enter the shops. Buy everything you can afford, but leave some money left over for later. I suggest buying a new sword or two, then buying all the armour you can. Don't purchase the Buckler - there's an enemy just out of town called the Unseelie who has one as a rare steel. Plus, it's just not that good a shield.

Exit, optimise your equipment, then turn to the stairs on the right. Climb up, then walk left to find three barrels. One of them has a Teleport Stone (Phoenix Down) for you. Now that the boring stuff is done, head to the pub in the middle of town and speak to the shady man with the mutt by the counter. Edgar seems to recognise him, and we get to name him. That means he'll join us soon, but I'm not writing up that character bio until he does. Edgar pisses me off by not using his famous 'kill his mama for a nickel' quote, and that's it for the tavern. Enter the inn just to the northwest and speak to the man in front of the innkeep. He makes an ass of himself by faceplanting into the wall, then we get into some tutorial about relics. Oh, I almost forgot about them!

Relics are items that can be equipped on your characters to provide certain effects. They're accessory-like artefacts that provide an additional effect to its holder, like having them protected against poison, or doubling their walking speed. You can equip two of them on any party character, but they won't raise any stats or anything like that. Most relics can be bought at shops (like this friendly establishment) or found, so remember to check out every relic shop available to you to find the best, most relevant items.

Anyway, the man in blue provides a selection of five relics for us - Sprint Shoes might be a nice touch for PS and GBA uses, but on the touch screen, they're actually useless. You can try running around with them if you like, but more often than not, you'll end up smacking into the nearest solid object like that fool from earlier. Waste of money - don't buy it. The Silver Spectacles, Star Pendant and Jewelled Ring all protect against various status ailments, so they're nice to have (but you only need one of each for now). The last one is a pretty 'meh' kind of accessory. The Knight's Code allows you to use the Cover ability, which allows the wearer to jump in and defend critically wounded allies from harm. It has its good moments, but it's mostly useless, especially when better relics come around. If you do buy it, give it to Edgar. He has the highest HP.

If you want to refresh the team, climb the steps behind the Relic seller and fork over 80 gil for a good night's sleep. If you are too proud/stingy/stupid, leave this insignificant little town the same way you came in.

Just north of South Figaro is a tiny hut with a free sleep waiting inside. There's also a potion in the bucket by the furnace, which doesn't change into anything later on, so you should grab it. Edgar is familiar with the smell of the place, and examining various objects will make him mention how everything reminds him of someone. As you leave, Edgar will wonder if his brother Sabin could possibly be living here. If you speak to the old man, Edgar will inquire about the Cabin owner's whereabouts, and he tells him that one of them (a student of the recently deceased Duncan) has left for Mt. Kolts. After randomly appearing while we were searching the house, he decides to leave us just as quickly. Well, over to the mountain, then.

The enemies here have learnt how to use status afflicting moves, so you better watch out for that. Trillium can poison you, Cirpius can petrify, and the Spritzers can hit with Slow, so think up some ways to avoid/heal that. Actually, I suppose I'll just do it for you. The Jewelled Ring Relic protects against petrify, but only Gold Needles can cure people turned to stone. Poison can be blocked by a Star Pendant, and can be cured by Antidotes and Terra's Poisona spell. Slow is a minor inconveniance - ignore it. All enemies can be afflicted by the Noise Blaster tool. Also note Zaghrems. They carry Bandanas to steal - the BEST helm yet, but they take a lot of patience to pilfer, if you try for one. Lastly, every enemy here is a little stronger than usual, so rely heavily on Terra for healing support to get out of this place relatively unscathed.

Walk up to the cave, enter, and go up the stairs. Follow the path to the outside, disregard that south path, and enter the cave to your right. Looks like north is the way to go here, but there's something down below us with some significance. Turn south and walk around the block here, pick up your Main Gauche from outside (good Locke weapon - actually, Locke exclusive weapon), then head back in. Ignore the obvious bridge in front of you and feel around the right wall to find a secret path leading to the bridge we actually need to take. Follow it to a room with a ray of light shining down and a chest nearby it, which holds the lovely Gigas Glove relic, which boosts strength by 25%. Give it to whoever, but I would propose Terra, since Locke would be busy stealing and Edgar would be using tools mostly.

Okay, NOW we may use that obvious bridge leading north. Once outside, it may seem like there's no place to go, but walking into the top corner will transport us to the eastern face of the mountain. Follow the path to the first cave, enter it, then follow it through to a Tent. Go back to the East side of the mountain, then walk left, then enter that cave. Walk right across one bridge, then cross the remaining bridges to arrive outside again. You'll notice instantly that it's much more overcast here than before, but I don't know how it is that happened. To the left of you is the chest you got that Main Gauche from, so we aren't any higher up. Where did the clouds come from? Well, looks like my stupid questions will never get answered anyway, so just walk along the path and ignore the mystery fog as you do. Traverse the bridge and enter the cave, then use the save point in front of you.

There's a boss up ahead, but its a reasonably challenging one, so be sure to heal and save like a good little walkthrough reader. Top up everyone's health, give Terra an Ether or use a tent if her MP's low, then run out into the light of the eastern exit.