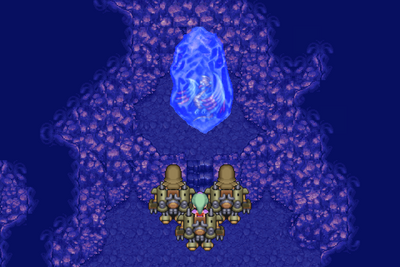 The game starts off with reading. Boo. Here's a summary: The War of the Magi was this big conflict that occurred a thousand years ago between Espers and Humans when the latter of those two got greedy and tried to nick the magical abilities of the Espers. Somehow, unbelievably, the magical Espers lost to the weak and feeble humans, and now lie about as pieces of magicite. The magi (magical folk) involved in the war have all but vanished, and the idea of magic has long since waned into legend. Our game begins in the snowy mining town of Narshe, where our main heroine awaits.

Two Imperial soldiers known as Biggs and Wedge ride in on technologically impractical suits of armour that can cast magic and squash large fruits. They bring in tow a young girl with green hair (not a Maenad copy!), who they have placed under mind control with some sort of nifty hat. Since her name isn't actually known yet, I can't do a character box for her, but I can with her compatriots!

If you ever want to know where to go (probably because you didn't want to read the story), hit the question mark in the top left corner for some advice from Mog. Head into the depths of Narshe, Kupo. Walk up and under the bridge, then turn right to get your very first action-triggered scene. You get an introduction to combat (puh-lease, I've already been through that, sister...) which is quite unnecessary, because all you have to do is tap any old magitek command to instantly annihilate the Silver Lobo. Poor little pup! Walk past the inn and some guards decide to fight you. End their insignificant lives however you want and walk into the square. Kill the Lobos that are released at you, then turn your wrath on their masters. Continue up north until you're surrounded by two guards and their pets. They say they've got you surrounded, but I don't think even they could be so stupid as to think that they've won. Exterminate these pests in the 'Side-Battle', where you're beset by two enemies on one side, and another to your rear. If you don't really want to think hard, just hit the fast-forward button in the top left corner. It's like an Auto-battle function.

Move up to the next screen, and get to the first set of stairs. Some soldiers and some Megalodoths will attack, but again, they're nothing before the might of Magitek. Continue north to the mine entrance (kupo), where Biggs and Wedge provide some chatter to rival the redundant talk of NPCs. Up and to the left is the game's first save point. Hopefully you won't have to listen to the explanation they provide because who in their right minds doesn't know what a save point does? Incidentally, save please. The cave to the right is too small for the witch to get her big fat head through, so just continue north to the barricade blocking the way through. Biggs or Wedge smashes through it, but beyond it a guard stands guard, guarding what I can only believe must be very valuable. To prevent us from reaching the 'Esper', he commands his servile monster friend to attack. Our first boss! How exciting!

Move north again after the Lightning Whelk is destroyed. In this area, Random encounters start to occur. Surely I don't need to explain what these are? It's when enemies randomly encounter you and you're forced into fighting them. Repetitive, I know, but you need to fight these things in order to level up your characters. Just don't bother doing it here, since the Magitek monstrosities make levelling irrelevant for the time being. Get to the room's north end to find what the Narshies were so damn protective about - a summonable creature (esper) incased in solid ice. Madame Green steps forward to investigate, and both Biggs and Wedge are eliminated by an eerie light. That's all? Damn, even Aeris did better than that!

The girl has been taken to a house in the town proper to recover, and she winds up in bed, recovering from her injuries or something similar. Amusingly, even though your next objective is obvious, Mog still finds it in himself to tell you that you should talk to people nearby. Doesn't make the game all that hard, does it? Would you like to write this shit up, Mog? The old man whose parents must have forgot to name him states that he removed the girl's slave crown (sounds kinky), but she doesn't seem to remember... After a few moments, it starts coming back to her, beginning with her name. 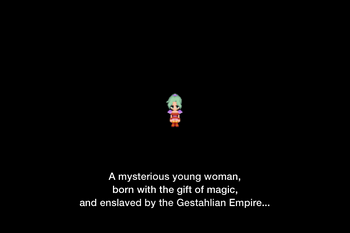 Desperation attacks are the antecedents of what we now know as Limit Breaks (also Trances, Overdrives, Quickenings, and Full ATB Skills). They're powerful techniques that can be executed by certain characters, and they are powerful, but they can only be used when that person has critical HP left, and even then it's a 1 in 16 chance that it will be used instead of the attack command. Every permanent character except two (I'll let you know who they are as they appear) can use these things, but they aren't very useful because of their low predictability. If you do see one used, get your eyeful, since they are very rare to occur.

Name her (I stuck with Terra 'cause it sounds nice), and the Old Man (rudely doesn't tell us his name still) remarks how quick we are to recover. Some Narshies try breaking down the door to apprehend poor Terra for her crimes against... er... whoever, and the Old guy decides to help us escape the mining tow through the caves. When you can move, walk left and up to the grandfather clock. Examine it for an Elixir (pretty damn soon for that kind of item!) and follow him. Just a note, most clocks in this game have elixirs inside them. Not exactly sure why that would be, but it's not of real import. Just remember to examine everyone you see in case I forget to mention them.

Follow that guy out of the house and into the mines on your left (some guards will see you on the way, but can't reach you). There are random encounters in here, but since our Magitek Armour has been taken from us (as well as Biggs and Wedge), Terra isn't as invulnerable as she once was. They're still easy to plough through, but you might need to use Cure a few times throughout the cave to stay safe. You'll come across another save point - which you should use, of course, and a bridge going up. There are two chests around here, but you shouldn't take them just yet. After a point in this game, their contents change from Sleeping Bag and a Phoenix Down into a Guard Bracelet and an Elixir. I'm not sure why this happens, but you don't hear me complaining. Walk up that middle section of the bridge, and clamber up the right stairs. At the top if the screen, some Narshe guards surround her, and she ends up falling down a pitfall trap to the next level down.

Yay, first page over! Let's try to end every page on a cliffhanger, why don't we? We'll see the shocking conclusion on the next page!

Retrieved from "https://finalfantasy.fandom.com/wiki/Walkthrough:Final_Fantasy_VI/CylindrusAltum/Part_I?oldid=3214501"
Community content is available under CC-BY-SA unless otherwise noted.