It's been a while, huskies. I took a while off from writing (mainly because my computer is going through a phase. And by 'phase', I mean 'refusing to work correctly'. It's still not perfect, but I got bored of waiting to start writing this. The upshot of this is that I may end up with a lengthy pause at some point during this walkthrough as I fix/replace my equipment. Bear with, friends!

Final Fantasy V is certainly one of my favourites in the series. Especially the GBA remake, which gives the characters more character (read: humourous dialogue). It was also the first game in the series to include superbosses. (Unless you count the optional bosses in the Lunar Subterrane of Final Fantasy IV, which I don't ;P) 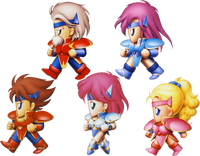 Something about this seems...underwhelming. Oh wait, the alternative is using Amano art. Pfft.