Welcome to Part 12, Palom's Challenge Dungeon and other optional stuff.

We spawn outside Troia, head inside and find Namingway in the north of town. I level grinded Palom to 30 with Leonora at 28 in the Lodestone Cavern before I ended the tale, if you didn't then head to the castle, enter the waterway and grind there. When we enter Palom's challenge we find the gimmick is that we explore three randomly chosen floors, then get to the boss. Well, let's cover them all then! As with Rydia, Bio to death anything that stands in your path, though also feel free to pick on elemental weaknesses to conserve MP. The Mad Ogre is here however and with no physical attackers your standard Black Magic will be useless. Instead use Break on him to kill him instantly. Lamias and Liliths should be taken out the same way, as they'll Confuse you, they hit hard and have high enough HP to possibly survive a group-cast Bio. With all the enemies here Leonora has her work cut out for her healing, bring Hi-Potions to help out. If Palom begins to run out of MP, remember Osmose, conserve Ethers when Leonora needs them. As in Rydia's Tale Ogres give 108 MP a pop, drain them for a nice pick-me up.

Floor A (there's no order, does it matter how I label them?) is the Convoy Floor, a floor full of ships connected by bridges. Take the left bridge to a Gaia Drum, then go back to the first ship and take the lower-right bridge. Go down at the fork to a Cross, then cross the bridge beyond it to find a Gold Needle. Back on the first ship take the upper-right bridge and follow the linear path to a ship with two more bridges and an Ether. Take the lower bridge to a Bronze Hourglass, then take the upper bridge and follow the linear path to some stairs to the next floor.

Floor B is a village. Follow the road to a fork and take the right path to an X-Potion hidden in the grass. Along the north path you'll see notches at the wall hinting at a hidden passage. Follow this new path to a well in a clearing, inspect it for full healing. The long strip of grass above and to the right leads to a Blue Fang. Head along the east path, taking a detour in the south building for a Silent Bell, and head north. Check the pots for Spider Silk and Ruby Ring. Go through the obvious passage and follow the path to a three-way fork. The two north paths have Hermes Sandals and 6800 gil. Then go down the lower east path to get to the next floor.

Floor C is a freebee floor with a healing spot and a portal out of the dungeon if you're feeling overwhelmed. If you are you obviously came here without level grinding and thus are ignoring my advice. As Kefka says, "you get what you deserve!" 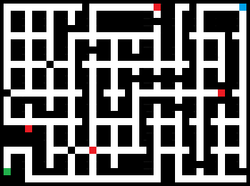 Floor D is labeled "Perplexion Floor". It's a complex map, so i took the liberty of making a map for you. The blue tile is the entrance, the green is the exit, the red are chests - Tent, Coeurl Whisker, Potion and Unicorn Horn.

Floor F is the Strength floor. Head up, left and down to find a Hi-Potion in the pot. Back in the main hall go up for a Killer Bow. Now check the wall crack below for a hidden passage to a Silver Hourglass, then go back. From the Killer Bow chest the exit is directly north, head left and up to get there.

Floor G is the Strongarm Floor. It's full of powerful monsters, remember to Break Mad Ogres, Liliths and Lamias. Go all the way right for a Phoenix Down, then back and take the north path. Ignore the right off-shoot and go north until you come to a wall, then go right. The upper path is short an leads to a Lilith's Kiss. Go right and down to a fork, take the lower-right path back up to two paths with a Cottage and Silver Apple. Go back to the fork and take the south path to the exit.

Floor H is the Mountain Floor. From the entrance go left and down past the bridge, climb two sets of stairs to a chest with 3000 gil. Go back down the stairs and walk around the formation to the right and down to some stairs. Follow the path here to find yourself on a hill at the right end of the big bridge we crossed under earlier. Go over the bridge and eventually down another long bridge to a Mystic Veil. This is the hat for Leonora, it boosts Speed by 1, Spirit and Intelligence by 7, has good defensive stats, resists Holy damage and makes her immune to Curse, which it seems many enemies in this dungeon like. Go back and exit to the next floor now.

Floor I is simple, the Magic Floor. Follow the path to a fork, go right for a Mythril Staff and then left for a Soma Drop and the exit. How quick!

Floor J is the Bridge Floor. Go right and grab the Decoy, then head down. Grab the Bestiary to the left then go right. Keep heading right and eventually you'll go up to an area with crates and a Dry Ether. Go back, go down and left and you'll find a path along the bottom to the right. Grab the White Fang and head up the stairs.

Floor K is the Flan Floor. Follow the path and inspect a pot for an Ether, then enter the cracked wall to find a hidden passage, at the end face up and check for an invisible Bomb Crank. Follow the path to the top of the area and head left through three invisible walls, check the clock on one wall for an Elixir, but the fourth wall with the chest beyond it is solid sadly. Go down to a small room with several pillars and immediately head left through the wall to find your way to the chest, it has 5000 gil. There's also two chests behind the pillars with Blinding Arrows and a Remedy.

After any three floors we get to the bottom. Save and rest. The next boss is the hardest yet and is best faced during the Waxing Moon. Head around and confront him.

If you thought to come here underleveled and just ran from everything, the Blade Dragon will make you regret it. He counters any non-elemental spell with Venom Breath, doing strong damage to our team, then uses Leach to heal himself. Furthermore he uses powerful "ara" spells, which will hurt. If you came during the Waxing Moon then Black Magic is weakened and White Magic is stronger, so Leonora can heal better and the Blade Dragon's spells are easier to survive.First thing cast Slow on him, this'll provoke a counter but it'll be worth it. Then heal up and watch the spells he uses. The trick is to attack with the elemental spell he doesn't use. If he's casting Fira and Thundara, cast Blizzara on him. Once you figure out which element he isn't using have Palom cast that spell on him. He'll use Barrier Shift on his next turn to change his weakness. Repeat this process and slowly but surely the Blade Dragon will fall. Have Leonora cast Shell when you have a free turn or two to buff against his magic. This is a very difficult battle, the Blade Dragon hits hard and you have to let him so you can figure out what spell to use on him. Leonora may run out of MP, don't hesitate to toss an Ether on her if she does. Also note that regardless of the message, the dragon doesn't always change its weakness, sometimes it keeps the same one. There are other possible strategies to use, but this one is the safest.

If you've got quick fingers there's a way to speed it up. When the Blade Dragon uses Barrier Shift, wait for him to cast a spell, say, Thundara. When Palom's ATB bar is full and after the Blade Dragon takes it turn, have Leonora use one of the other two elemental spells, in this case Blizzard or Fire, and watch if Leonora's spell damages him. If it does, you know that that element is his weakness, if it doesn't you know the third remaining element is his weakness (he uses Thundara, he resists Leonora's Blizzard, thus he's weak to Fire). You now know his weakness either way, so quickly have Palom cast the appropriate spell. If Leonora didn't damage him then fine, if she did damage him you should be able to get Palom's spell off before the Blade Dragon can use Barrier Shift. This is faster, but Leonora won't be able to heal and buff you as often. Keep track of the dragon's health - when he's weak, once Palom fires off a spell have Leonora attack the dragon normally. It'll counter with Venom Breath and Leach, but Leach restores less HP as the dragon loses health so when weak it'll heal less damage than Palom inflicts. Using his counter resets the Dragon's ATB bar and thus Palom should get another turn and be able to cast a second spell before the Dragon can use Barrier Shift. Speeds things up a bit.

A third strategy makes the fight very quick, but you need to be at a high level for it and fight during the Full Moon. Once you get your initial Slow cast and are healed up, use Particle Bomb on the Blade Dragon. It should do several thousand damage, provoking a Venom Breath and Leach counter. However, as mentioned this counter resets the Dragon's ATB bar. Provided it's a Full Moon and your characters are leveled up enough with good Intelligence and Spirit, after the Particle Bomb connects a Bio from Palom should do more damage than Leach can heal. Thus you can get into a pattern of Bio-Venom Breath-Cura, the dragon will never get a proper turn, Leonora should be able to heal well enough to nullify the damage from Venom Breath, and you'll slowly whittle down the Blade Dragon with Bio as Leach heals less and less HP with every turn.

As with all the challenge dungeons this fight gets easier as you fight him over and over and get better equipment and level up more. So, what spoils do we get for crushing this behemoth? Well there's the standard Adamantite, Elixir, Soma Drop and Silver apple. Then we have the Wizard's Rod and Protect Staff, both good weapons for our mages. The Talisman boosts Spirit and Intelligence by 5, great for either of them but I say Palom, if you fight on the Waxing Moon Leonora should have no trouble keeping up with the Blade Dragon's damage, and can heal you outside of normal battles, whereas Palom is your sole offense and needs all the boosts he can get. The Black Robe boosts Intelligence by 5, also good for Palom. The Red Robe boosts Intelligence and Spirit by 4, which is one less Spirit than the Sage's Surplice gives, but the loss of a single point is worth it for the boost to defense. The Single Star lowers MP consumption by 25%. Thus, Bio goes from 20 MP to 15, for example. It flat isn't worth giving up the stat boosts of your other armlets, 25% isn't a lot, and you should be at a high enough level that you can get to the last floor's save point without running out of MP.