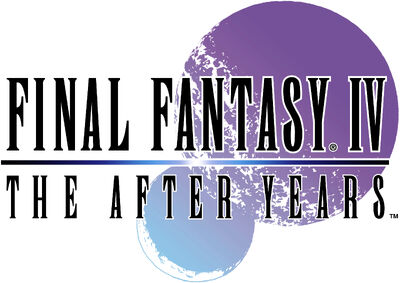 Oh my God what's up everyone! I, CylindrusAltum felt unsatisfied after finishing my Dimensions walkthrough, and lusted for more. But I faced a dilemma! Which game should I write a guide for? The popular VI? The incredible VII? The first? The most recent? My personal favourite, XII? But just one day after uploading Dimensions, I saw something amazing on the ShinraNews page: FFIV: The After Years is out on IOS and Android! NO WAY! NO WAY! HOLY SHIT YOU GUYS! I remember playing the DS version of FFIV with its cartoonish yet stylistic graphics like it was only yesterday... and I loved it! I yearned for more of it. And here, against all odds, sits its sequel! An inferior, lame-plotted game that doesn't exactly shine next to its predecessor. Nah, I'm only kidding. I've never actually played the game before, which is what's making me so excited. It better be good though, I forked over $16.05 for this, so I better get my two bobs worth.

Final Fantasy IV: The After Years (Henceforth known as FFIV:TAY or just TAY) is a sequel to the original game set 17 years after the IV, and many things have changed. Cecil and Rosa have a child, Kain has become cold and unfriendly again, and a new threat looms on the horizon. I am so stoked right now I can't even see straight. I don't really have anything else to say here since I'm new to the game, unlike my first one where I actually played it once before. This is a game divided into chapters, and looks individually at the lives of all of IV's protagonists, from the bitchy Porom to the sad-ass Edward. What fun we are about to have, you and I! Let's get ready to play!

The game I play is exclusively for IOS and Android. TAY can also be bought from the PSN and played on the portable/WiiWare, but I can't attest to how similarly they will be linked. You can follow along at any rate, hopefully my walkthrough shouldn't be too different from your game.

One warning before I progress. I'm vulgar, I'm irreverent, I'm obscene, and I'm recalcitrant. These are all things you should know before reading what my fingers dun typed up. If you can't handle 'rude language' or 'salacious references', then you can just just get lost right now. I'm sorry, but It's just polite to set up disclaimers so that I don't get scolded or told off by anyone later on.

This game was first introduced to Japanese audiences on February 18, 2008. Little over a year later, on June 1 2009, it was released to western audiences for Wiiware. It was received positively overall, but had a generally lukewarm reaction from professional gaming sites. As was alluded to, this game features the adventures of Cecil and friends 17 years after the defeat of Zeromus in the planet's core, and Cecil and Rosa now have a son: Ceodore (Incredible - They picked the second worst male name in the world. After Cecil of course).

I'm just going to copy some of the boring stuff from my other walkthrough because I just want to start the game. You want TAY for your handheld device? You must purchase the game from the iTunes/Android store. I know for a fact that TAY can be bought from the iTunes as of the 25th of November because I just invested all that money in it. I don't know how to go about doing it on Android, because I barely even know what Android is/does. Like Dimensions, the gameplay is episodic. You'll have a chapter with Ceodore, a chapter with Rydia, a chapter with Edge, and so on. Unlike Dimensions, you don't have/get to purchase these chapters individually. You buy it once, you have it forever. So yeah, go onto iTunes (if you have the iPhone/iPad/other Apple device; if you do not, I can't help), purchase the game from the store (you need to purchase funds from iTunes cards first) and then download it onto your IOS device. It’s a lot of running around, a fair bit of annoyance, but a complete game for on the go entertainment at only 16 bucks can't be all bad right? (Well it better be I tell you what).

Right-O my ho, Press Select Tale at the opening screen. You only have one option to choose from, so lightly tap the screen to kick off the adventure. Before I join you, there's one thing I have to do first.

For this game, you are given a four-pointed compass to use for overworld and dungeon exploration. Touching the screen will make the compass appear. This compass is special, allowing you to go in EIGHT directions! (You aren't actually reading this, are you?) Pressing the centre of the compass will make you interact with people, chests, and objects of interest. You can only walk in these eight directions, and gameplay mostly revolves around the journey from point A to point B, and all the battles in between (Oh my God, you are!)

The Menu button opens the menu, which sounds amazing. It allows you to assemble your team, determine their row placement, and switch them around. It also allows you to change their Job, examine their abilities, check your inventory, view your Magic/Skills, organize team equipment, observe your party’s status, and allow you to save and quicksave (but only in appropriate areas). You can also use the “config” button to switch certain arrangements around. I wouldn’t recommend ever pressing that button. It just makes you feel better, knowing that help, sound, and minimap dispositions can be altered as you please.

In battle, you have the choice of using several commands in order to reach a certain goal. What goal? To WIN, dummy! Why are you even reading this? You’re probably as bored reading this as I am typing the shit, anyway. You can attack you foe. You can defend against your foe. You can use magic (offensively or defensively) and you can use special abilities exclusive to the character or job. Seriously now, if you've played any RPG before, you should know all this, or at least be able to figure it out by you lonesome. If you haven't played an RPG and this is your first, then you made a shit first choice. Sorry babe, but it's the truth.

Battle is turn based, so you have a turn, then your foe does. Capiche? You can trigger a battle simply by walking around in dungeons and on the world map. They’re called Random encounters, and they get old REAL FAST. But I suggest you NEVER run away from battles. Not only do you need to stay up to speed with your character’s leveling, but I will officially declare you PUSSY FOR LIFE if you run from battles you can win. Oh yeah, I forgot to mention that this game has a leveling system. Kill, and your team members will gain the experience needed to kill again. And so it goes, a veritable genocide of monsters and humans alike. This game is like Mortal Kombat but without the gratuitous violence and gore. Just another reason to run around killing misunderstood creatures in horribly inhumane ways. I guess that’s why these games sell so well.

Weapons, Spells, sundries and other items can be obtained through purchase, through winning them in battle, stealing, looting (Chests) and receiving them from well-wishing NPCs. Spells are needed to cast magic. Weapons are needed to murder things. Armor protects against the things that attack you. Et cetera. You really should know this.