If we're happy, then head to the Crystal Palace and get on the portal. Woosh. There we go.

Welcome to the Lunar Subterrane. Okay, that was too lame for your final dungeon. Ehem, (Golbez voice) #NotThatItMakesADifference Welcome to the Lunar Subterrane – good news about this dungeon – there will be no KaiCilRos catfights (in FFIV fanfics, this is where they happen, though), and no Kain betrayals. Bad news about this dungeon – you’re screwed. And in a veeeeeeeeeeeery bad way.

For further demoralization, the FFIV crew has decided to put together what? the tricky, back-and-forth-between-floors-map-fillings architecture, BOSS-LEVEL ENEMIES FOR RANDOM ENCOUNTERS, only two save points over a total of 11 floors you’ll have to get through, a total 6 bosses which are seriously no joke. For those who are seeking the all-powerful Rainbow Pudding, this is the only place you can waste your life on finding them. Using a Siren in this dungeon) calls for either a Red Dragon (which can yield Onion Equipment btw but the chances are impossibly low), or the like. Using a Siren on a special room in B5 though, calls our new besties, the Princess Flans! Yes, I have been lucky enough to have been dropped a Rainbow Pudding. Just stick along with these wenches, and you’ll get a drop soon enough. I’ll tell you exactly when and where, don’t worry. For now, let’s focus on getting things straight. The first thing I’ll have to orient you on are the enemies. (clears throat) This is going to be quite looooooooooong. Again, if your inventory isn’t prepared with Phoenix Downs and the healing basics (Ethers counted), get the hell out. You’ll use a minimum of 10 Phoenix Downs in every floor even if you’re fighting quite carefully.

For the Armored Fiend though, I’d really pull Odin on him. He’s too rowdy and causes too much damage in such short periods of time, so get rid of him ASAP.

The real headache here are the dragons. Gold/Silver Dragons are fine (they’re very susceptible to Paralyze, by the way – a hit of Rydia’s whip and they’ll be afflicted – perfect chance to refresh your team with Pray. They’re also susceptible to Stop). The nightmares here are the Blue and Red Dragon. Their elemental attacks are yes, going to critical you all, but as in every other battle, the rule is to 'KEEP HP UP. No matter what. Defeats aren’t worth it, just win battles no matter what. The more you win, the easier things will be.

On to harmless enemies. Lil’ Murderer won’t do as much as attack every now and then, so this is the perfect time to Pray and refresh your team. About five-seven hits from everyone will do to take it down.

What else? That’s about it for enemies and battle-to-battle survival. You’ll be coming across a lot of amazing equipment upgrades in this dungeon, which is good. Also, the good news is that the 6 bosses we have to take down here guard the ultimate weapons for the party (they’re optional, but shame on you if you don’t take these bosses down. Just, shame on you and your cow).

Let me be honest here. If it weren’t for the levels that you need, I wouldn’t be advising you to take the 1 million detours needed to fill out the maps completely. The thing is, the ultima weapons happen to be found in said detours, so we have no choice. Here we go!

B1. After you’ve filled out the main area, climb up the stairs and to your right is a secret passage. Loop around, and you’ll get Edge’s Black Garb. Now, take a deep breath, go back to the B1’s entrance and do the same thing: walk west and go through the sister secret passage, then finally to the Teleporter. 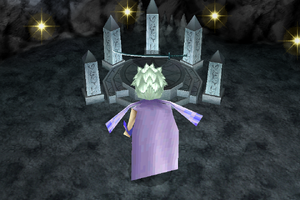 This leads to B2. Don’t worry, it’s not going to be this easy. Head North (you’ll get a Sage’s Staff, which we don’t really want), then go to your left and take the Teleporter ahead. Move along and you’ll reach B3. Our first boss for this dungeon awaits us in the furthest-left corner of this room.

These weapons are just so good and almighty that Zemus is being this scanty on us, eh? The more reason to take them. Before you challenge the pedestal’s threat: I hope you haven’t Thrown Defender or Avenger yet. Equip Defender on Cecil, but if it’s no longer with you, I guess you’ll have to settle for Avenger. We’ll be playing Cold War With Elements in this boss battle. And also, cast Float on your entire party.

White Dragon. Ah. This will be your easiest boss so far, but there’s a complication. This smart dragon absorbs every single element, so magick is pretty much useless. Physicals are countered with Blind, and magick with Maelstrom (we won’t be using magick so it’s fine), summons Earthquake (not an issue since we’re Floated).

Stop this guy first. Then hack away. Rydia should obviously summon Bahamut. Throw about 7 Shurikens (quota your Shurikens for every boss, btw, don’t be too prodigal) and have Rosa help with her bow. This shouldn’t be difficult at all.

Now, congratulations on getting Murasame. This will be upgraded with Masamune (tries resisting singing OWA) in the next half of the dungeon, but of course, use this one for now until we get there.

To complete B1, go back to the nearest entrance and head south to complete the missing path you can see in the next floor. Now comes a cumbersome part: you’re on the secret path, right? Keep going straight until you’re collinear with the chest to your left.

Retrieved from "https://finalfantasy.fandom.com/wiki/Walkthrough:Final_Fantasy_IV/Divinecross/Part_19?oldid=2156187"
Community content is available under CC-BY-SA unless otherwise noted.