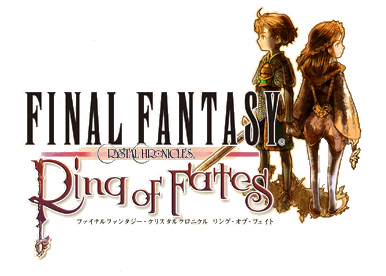 This is a guide to the Nintendo Dual Screen game Final Fantasy Crystal Chronicles: Ring of Fates. In the unlikely event that there is any difference between the EU and US versions of the game, please note that since I'm English, this guide is based on the former.

I think that you should be aware that I cleared all of my save data so that I could be completely certain that my completion data wasn't unlocking anything on a fresh New Game file. Suffice to say, you'd better be damn grateful for my sacrifice, you hear?

How to Play Ring of Fates[]

I'd love to do a certain joke here, but I'd just be copying a certain user. Though they do say imitation is the highest form of flattery...

Since this game is on NDS, you'll be using the following parts of the handheld device:

Like the Kingdom Hearts games, combat is mostly hack-and-slash, and enemies are encountered in the field. The main difference with KH in this respect is the magic system. In RoF, you cast magic by moving a target ring to the target. Magicite target rings can be piled to form higher spells, and locked to delay their casting. Item target rings cannot be piled, but they can be locked. Magic piling can be performed solo or by tapping another party member's icon while casting a ring to make them cast a ring onto the same place as yours. Cooperating like this is the only feasible way to manage to cast spells such as Ultima.

Character growth is governed by the good old level up system, with boost items for character statistics found in certain treasure chests and purchasable from Artemecion's shop in Rebena Te Ra, as well as being an extremely rare outcome of Lilty Alchemy. Characters learn their abilities, which are specific to their tribe, at certain experience levels.

There is relatively little outside of plain text, with the odd image and a few fairly self-explanatory things like enemy rosters. The only thing that really needs to be explained is that when you open a treasure chest or break a barrel, the walkthrough will give you a reference in the form "C__" for chests and "B__" for barrels. This reference code refers to the Treasure Index of my guide. Other than that, I hope my guide is clear enough. If you find any of the actual phrases or terms used in the text confusing, you can refer to the Glossary. If you still have problems... well, that's exactly the sort of thing that Talk Pages are useful for!

Elucidation of some of the perplexing
vocabulary in my assistive document

Children, moogles, and a Scorpion

Temple bells, ruins, and a Behemoth

Snow again, a rescue, and a Crystal

Treetops, feral youths, and a Plant

Heavy rain, mechanisms, and a Fish

Underworld, carbuncles, and a Parent

More rain, evacuation, and a Fish

Returning, an impostor, and a Lich

Lunites, traps, and an Anchorite

Worlds, realities, and a Moongod

Yes, many of those Chapter titles are deliberate references:

The caption for the Treasure Index ("my beea-oootiful looty-booty") is an Edge Chronicles reference as well.