Before we take on the final dungeon, head to Mount Duergar.

Head west and north from the entrance to find the smithy, appropriately named Smyth. Hand over the Adamantite that you very definitely picked up in the Flying Fortress and he'll turn it into the Excalibur.

Not bad at all. With sword in hand, it's time to finish this. Head to the Chaos Shrine.

If you're on the PSP Version, you'll see a hooded figure head through a hidden door at the back of the room. More on that in the postgame section.

For now, just go to the centre of the room where you fought Garland. Examine the Dark Crystal. Step on the panel where it was to travel 2,000 years through time to the Chaos Shrine of the past, our final dungeon.

Head to the south-east corner of the first area to find some stairs. Go east to another set of stairs.

On 3F, head south and take the second east (after you start going south; the first east on the corner doesn't count here). Go north when you can and enter the room. The Death Eye gives a whole 1 EXP and 1 Gil :|

Raid the Dry Ether and Elixir, then examine the tablet to finally make some use of that Lute to open the basement.

Leave the room and go northwest to another set of stairs. On 1F, head west to the next staircase. This is some final dungeon, right?

You'll end up on the southwest side of B1. Go clockwise around the room to the southeast side of the room. Guarding the stairs is...Lich?

Take the stairs down to B2. The next staircase is so close, but you have to take the long way around. Go west (through the pillar 'path') and north to a large room.

Head north then east when you can. Take the third south along and out of the room. Further south are more pillars -- go west through the pillars, then south.

Take the left door and grab the Protect Ring to your left. Now go south and follow the path to a treasure room in which you'll find another Sasuke's Blade. So he had two?

Anyway, return to the northwest and leave the treasure room. Enter the door on the right and grab the Protect Cloak. To the southeast is another treasure room, which contains a Megalixir.

Now that you'd finished treasure grabbing, leave the treasure room to the northwest and approach the staircase to the north.

I'm sorry if my directions are dodgy. Anyway, Marilith Take 2!

Downstairs! Guess who's floor this is.

Go through the small room and head south. You have a choice of rooms, on the left and right sides. Take either side and go south.

Go north to the next room and proceed to the centre where the tablets are. They don't do anything, though =(

On B4, go south and east through the connected rooms and along the thin, diagonal path to find a treasure room containing a surprisingly unguarded Masamune.

Back at the start of the area, go east through the rooms. You'll be accosted by guess bloody who.

And the Four Fiends are finally down. Come to think of it, we didn't even know they'd be here...why are we here again? What are we doing here exactly?

Ah well. Head down the stairs to B5. From here, head go south. Save outside the room! Make sure you heal yourself fully.

Head inside to find...Garland? Guess we didn't kill him hard enough last time. Well, it turns out that Four Fiends sent him back into the past, where he will send them into the future to do just that, thus completing a never-ending cycle where Garland and the Four Fiends rule over all.

And Garland is defeated! Though I'm still not sure what the upshot of all this is -- we restored the four crystals a while back. For all we knew everything was fine and dandy.

Well, not to worry. There's the satisfaction of completing the first game in the series, of course. Not that we've really 'completed' it at all...

The credits roll, and you've given the option to save. DO NOT save over your file; you'll need it intact to take on the optional content.

Still, congratulations! We've made it this far, so have an ending screen! Hopefully I'll see you at the Soul of Chaos and Labyrinth of Time sections. If not then, well, see you next time. 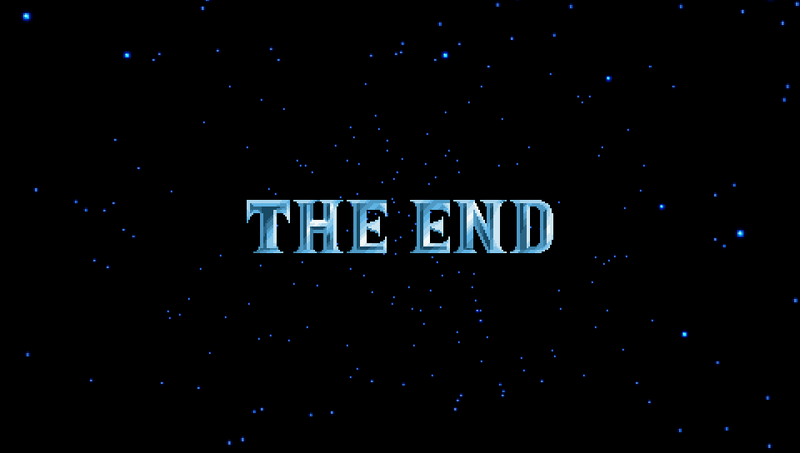 Retrieved from "https://finalfantasy.fandom.com/wiki/Walkthrough:Final_Fantasy/Apoqliphoth/Part_14?oldid=2916960"
Community content is available under CC-BY-SA unless otherwise noted.