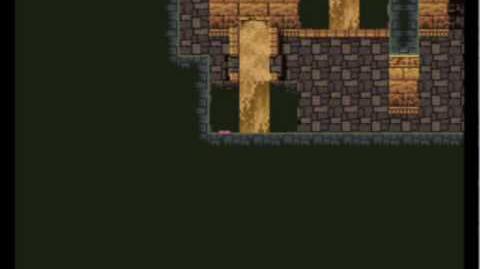 The walking through walls glitch is a glitch found in some Final Fantasy titles where the player can walk through walls where this was not intended possible. Also note Walking in air glitch, which is by all technicalities the same error, just with the should-be inaccessible tiles having an appearance of sky, not land.

In the Nintendo DS remake, if the Nautilus parks in a specific area in the middle of one of the peninsulas of the left-most continent on the world map, they will be inside of the continent. If one surfaces, they may be traveling through the mountains, or they might even become stuck inside the hidden dark knight town, Falgabard (Final Fantasy III).

This glitch happens in two parts. The first instance is at the Pyramid of Moore, where, on the sixth floor, a player drops from the sixth floor to the fifth floor from the first sand pit. If the player then heads to the door that lets them escape the area, and instead heads north, the player will be able to walk through the Pyramid walls and go into any room within the Pyramid. If the player enters a room, they will not be able to leave through any of the exits, including falling into a sand pit.

The second instance occurs at Istory Falls, right at the entrance. Right as the player enters the dungeon, if they take one step back and go either left or right, they can walk through the walls. Amusingly enough, there is a bonfire inside the wall. It is possible to enter the second area of the dungeon by this way.

This glitch occurs in the basement of the rich people in South Figaro (the room with the record player). If the player were to open the door and step inside (but not go all the way through), open the submenu, and then close out of it, the door will be closed on the character sprite, and the player will be able to walk through the wall to the right.

This glitch is also known as "Dragon Warp". It requires a Door or the Teleport ability available. The player can warp off the race track in Race Circuit and arrive in another town. The game doesn't know how to handle this, as little things like clipping weren't programmed exactly into the dragon sprites.

The player can walk through walls, cross empty space, and find all kinds of neat things, among them being:

If the player gets lucky enough to learn Teleport, they can do this at will as many times as they like as long as they don't finish the race. The player should be cautious as they should not enter anywhere like the base of the second Pillar of Sky in Final World where Apollo is waiting, as meeting him will result in all the player's MAGI being taken away.

If the player decides to explore, it is not recommend to save the game while there's a chance the player might get stuck somewhere and can't continue the game normally, as this would make the player's current save file unplayable.