Yuna's blitzball-toting guardian. His training has honed the accuracy and power of his shots, which can take down both fast-flying fiends and enemies afar. He's a competent and versatile fighter, but he has yet to win an argument with Lulu.

Wakka is a party member character in Final Fantasy X. He is the party's ranged fighter, throwing his blitzball at enemies with accuracy, able to dispatch out-of-reach and flying enemies. He also uses his blitzball for his Overdrives, and learns status ailment inducing attacks. Wakka's strongest Overdrive, Attack Reels, gives him the highest damage potential of any character in a single turn.

Wakka is one of three characters, along with Tidus and Rikku, who can fight underwater. He is recruitable as a blitzball player, and with a salary of only 1 gil, is the cheapest player to recruit. He is one of the

Wakka uses sports gear as his weapons and armor in battle. He uses blitzballs as weapons, and is the only character who can reliably hit aerial monsters with basic attacks for much of the game. Since the blitzball is a ranged weapon, Wakka is one of three characters in the game, save for aeons, who can hit out-of-range enemies (the others being Lulu with her Black Magic and Kimahri with his Lancet), and the only one who can do so using physical attacks.

Wakka, Tidus and Rikku are the three party members who can battle fiends underwater. When counterattacking, whether the fiend is in the air or on the ground, Wakka holds the ball with both hands and swings it downward upon the fiend. He does this when countering underwater as well, and uses a regular underwater attack when encountering a fast underwater fiend. Wakka has two victory poses, depending on whether he is on land or underwater. On land, he throws his head back and laughs arrogantly. Underwater, he beats his chest twice and raises his arm.

Wakka has relatively high Strength and quite high Accuracy, as well as a decent Magic stat, making him a balanced character. Wakka has the highest default Luck stat in the game.

Wakka can equip blitzballs and armguards. Through his use of a blitzball, Wakka can perform the Attack command on "out-of-range" enemies, like in the first battle against Sin.

Wakka is one of two characters (the other being Kimahri) to join in Final Fantasy X with no armor equipped. Wakka's weapon and armor names have a sports theme, such as T.K.O. (technical knock-out) or Official Ball.

Wakka's Sphere Grid area runs near Lulu's and Auron's, and his sphere color is yellow. The unique abilities in Wakka's default position on the grid include skills that inflict the status effects Darkness, Silence, and Sleep. He also gains HP-draining skills. Although Zombie Attack is found on Auron's section of the Sphere Grid, only Wakka has a quote when using it, like the other Status Attacks, suggesting the attack is meant for him.

If Wakka gets petrified by his own attack via the Stonestrike weapon ability, his ball will be stuck hovering in mid-air high above his head. It will remain there even should he be healed from petrification, although it doesn't hinder his ability to attack with it.

Wakka's Overdrive is Slots, where by lining up the reels the player can imbue different effects to Wakka's blitzball(s) and then hurl them at the enemy. There are three different slots, each affecting the outcome of the attacks differently. Aligning all three doubles the effect.

Unlike many iterations of the Slots, players can control the outcome completely. Slots are earned in blitzball tournaments. In the International and HD Remaster versions, Wakka's Slots gain a power bonus the more time that remains. There are 20 seconds on the timer for all reels.

Wakka is a professional blitzball player and captain of the Besaid Aurochs, a team that—as of the beginning of Final Fantasy X—went 23 years without winning a game. Wakka retires from blitzball after the Luca tournament so he can focus on his guardian duties, but can still be re-recruited into the Aurochs later.

Wakka has a unique blitzball technique called Aurochs Spirit, which adds the sum of the SH of all the original Aurochs currently on the team to Wakka's own SH.

With his high EN and SH, Wakka is best in a forward position. He has the first level "Venom Shot" from the beginning, but he is weak defensively. At a salary of 1 gil per game, he is the cheapest recruitable player, though other teams will never sign him. Wakka is also the only blitzball player who doesn't swim using the breaststroke technique. 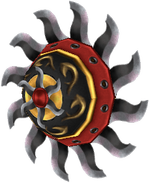 Wakka's Celestial Weapon is obtained in Luca in the Luca Cafe. The player must first come at least third in a blitzball tournament, or win five blitzball games, then speak to the bartender. She will ask the player to see the Celestial Mirror, and if obliged, will give the weapon.

The Jupiter Crest is found in a locker upon return to Luca any time after the party leaves after the blitzball tournament. From the lobby, the player must enter the upper-right hallway and enter the Besaid Aurochs' locker room. The crest can be found in a locker. In some versions of the game, the Mercury Crest has switched names with the Jupiter Crest (this also applies to the sigil); however the player still obtains the crest for Wakka's weapon from this locker.

The Jupiter Sigil randomly appears with 50% chance as prize in a blitzball league once the player wins all three of Wakka's Overdrives in previous competitions.

This weapon was previously owned by High Summoner Ohalland.

The World Champion deals more damage the closer Wakka is to his max HP.

Upgrading the World Champion with the Jupiter Crest will allow Ifrit to break the damage limit.

The following table lists the abilities the World Champion will have after the appropriate upgrade is used.