Wakka makes a cameo as a tutor from the in-game manuals. Along with Rikku he explains how to use the shop. A Ghost Card bears Wakka's name, and is a Level 100 Tidus that has the Sphere and Blue Gem items to be won through battlegen. Tidus's four exclusive weapons are named after Wakka's weapons.

Wakka appears as a playable character.

Wakka is a summonable Legend.

Sleep Buster (UR+).
Add a photo to this gallery

Sleep Buster (UUR).
Add a photo to this gallery

Wakka appears as a recruitable character. He is unlocked in Besaid on Classic in the storyline of Final Fantasy X as the First Time Reward.

I feel like as long as I'm with you, I can't lose. Let's keep working together!.

Wakka appears as a character and summonable vision. His job is listed as Guardian.

Lua error in Dev:Quote at line 81: attempt to concatenate field '?' (a nil value).

Wakka's stats at his highest levels are as follows (with no passive abilities taken into account), along with the maximum amount of stat points that can be increased through pot-enhancements:

Wakka can equip the following weapons: daggers, bows and throwing.

He can equip the following armors: hats, helms, clothes and light armor. 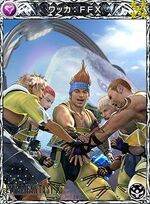 Wakka appears on a Triple Triad card in the version available via Final Fantasy Portal App.

Wakka plays a minor role in the Kingdom Hearts series. Together with Riku, Tidus and Selphie, he spends his days playing on the Destiny Islands and sparring with Sora. He is skilled with a ball, and together with Tidus, he is inventing an "underwater ball sport". When Sora, Riku, and Kairi leave the island, Wakka, Tidus, and Selphie are left behind.

Wakka reprises his role in Kingdom Hearts: Chain of Memories albeit as a memory fragment. He is briefly mentioned in Kingdom Hearts II by Selphie, commenting to Kairi that "Tidus and Wakka are all wrapped up in their ball game" when asking her to go to the smaller island with her.

Wakka makes an appearance in Kingdom Hearts χ [chi] as one of the obtainable character cards. He appears in the remake, Kingdom Hearts Union χ[Cross], on several medals.