Vyraal is a Rank V Mark from Final Fantasy XII. The hunt can be undertaken after the storyline events in Draklor Laboratory are complete. The Vyraal can be found in The Northsward area of the Cerobi Steppe. All other enemies are cleared out when the player enters. The party will be assisted by Viera Wayfarer.

Two of them are also fought alongside a Deathgaze in the Zodiac versions' Trial Mode in Stage 65 where the Demon Shield can be uncommonly stolen from it and and the Dragon Shield rarely poached from it.

Being a Variety of the Dragon Aevis with Scales of a exceedingly hard Nature. The material of these Scales is known for its Smoothness and Durability, as well as its surpassing Lightness. Though normally given to lurking in Mountain Passes and the like, during Rutting season the Wyrm expands its Range and becomes rather Hostile. A Victim of the Creature's attacks, one Viera Wayfarer, posted a Bill for this Mark.

The party will be helped by Viera Wayfarer.

The party will be helped by Viera Wayfarer.

In The Northsward area of Cerobi Steppe, there will be no other monsters around except for the gigantic Vyraal. When the party and the Viera Wayfarer start to move about the area, the Vyraal will rush towards them.

When Vyraal's HP is halved, it will attempt to escape and is too fast to catch up. It will soon return with its HP restored, and it may have status buffs of its own, even if it was silenced prior to its departure. As Vyraal's health gets lower it will put up a paling that will make it immune to magick.

The Viera Wayfarer always casts Shell and Protect on any ally. Despite her low-level equipment (the visible one is the Shortbow), her HP is rather high at around 4,300, but she is immune to Bubble, so healing her is the only way to keep her alive. She may use X-Potions on herself, enough to restore her HP above at least 40%.

Buffing the party and the Viera Wayfarer is useful since it's impossible to outrun the Vyraal. When it flees when its HP drops, it is a good time to recast buffs.

The easiest way to inflict it with the statuses is with the Nihopalaoa+Remedy trick. The ideal spell to use is Aeroga since Vyraal is weak against Wind.

The player will also receive the Viera Rucksack after the battle, which the Viera Wayfarer will take back when the hunt is reported. She lets the player keep the Dragon Scale, item part of the Wyrm Philosopher sidequest. 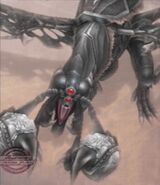 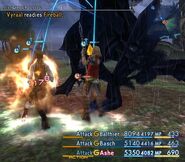