Vorpal Bunny is a Rank III Mark in Final Fantasy XII. The hunt becomes available after defeating Bergan in Mt Bur-Omisace. Vorpal Bunny can be found in the Rustling Chapel area of Golmore Jungle.

According to Nera, the petitioner, Vorpal Bunny only shows itself every seven years, and that its tail is used by viera salve-makers to create a special substance, called "Vision Dust", as a rite of passage. She posted the bill for her friend, Alja, to become a full-fledged salve-maker, as Alja herself is not quick enough to catch one because of her lame leg.

Vorpal Bunny is also fought in the Zodiac versions' Trial Mode in Stage 62 alongside a Biding Mantis and Vampyr, and Stage 63 alongside the other dreamhare-type enemies.

Being a Dreamhare possessing a distinctive dark-furred Body and feathered Ears. Its large white Tail contains a unique Oil, used by the viera for Centuries as an Ingredient in potent Unguents and Remedies. It is understandably quite wary of Man, and therefore difficult to Catch. Posted as a Mark by a kind soul hoping to help her Friend become a true Salve-Maker.

Restored to full HP if it goes back into hiding with Protect status.

Restored to full HP if it goes back into hiding with Protect status.

The Vorpal Bunny is a scarce creature, and will keep running away rather than fight. The player should try and keep it in their sight, as it may go underground and fully recover all damage the player had inflicted.

It starts out with the Protect and Faith buffs, but not dispelling these buffs doesn't change much of the difficulty to defeat it.

Trying to chase it while equipped with melee-type weapons is not recommended as the attacks will not hit. One strategy is to cast Berserk or throw Bacchus's Wines at the Vorpal Bunny, to force it to stay in one place. This will make its normal attacks do over 400 damage with good armor on, but the damage can be lowered with Protect. A long-enough Quickening chain can kill the Vorpal Bunny instantly.

It is easiest to defeat the Vorpal Bunny enemy without defeating all other enemies in the the Rustling Chapel area. If the player does, Dark Skeletons spawn over the area. Alternatively, the player can leave and reenter the area.

Nera will be waiting at the entrance to Eruyt Village, as not to let anyone from the village know she had gotten help from outsiders. She tells Vaan to follow her from a distance so that they can speak freely at a disclosed location, but they are spotted by Alja. 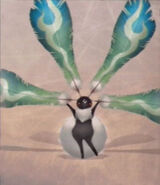