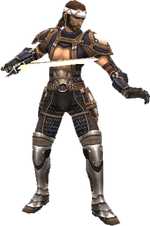 You—a man who has never lived bound by the chains of his country—how can you understand my pain?!

Volker is a Non-player character in the game Final Fantasy XI. He is a champion of Bastok, believed to have delivered the final blow to the Shadow Lord at the end of the Crystal War. The nephew of Ulrich, he is presently the captain of the Mythril Musketeers.

Volker may be fought in the special event battlefield Hero's Combat.

As an ally, Volker assists player in the battle against Zeid in Bastok Mission 9-2: Where Two Paths Converge. Being a Warrior, he has a high attack power and deals decent damage, occasionally using the Vorpal Blade weapon skill. He is also capable of using a move known as Berserk-Ruf, which gives him Warcry.