Final Fantasy Wiki
Register
Don't have an account?
Sign In
Advertisement
in: Characters in the Chocobo series, Chocobo to Mahou no Ehon: Majo to Shoujo to Go-nin no Yuusha Characters
English

Volg (ヴォルグ, Vorugu?) is a non-player character in three titles of the Chocobo series. He is an exceptionally strong chocobo—he claims to be one of the mightiest chocobos to have ever walked the earth—that is different from the rest of the Jailbirds Irma raises.

In both of his first appearances, Volg's story is explained to have begun after his mother died protecting him from a beast. Since then, Volg trained to become stronger and had a unbeatable streak until he was injured in a fight with the monster that killed his mother, receiving the trademark scars across his beak and losing the use of his right eye. Irma, who watched the fight, saved him and she and her mother nurse him back to health. Giving him his name with the promise of a decent challenge from her own intent to become a treasure thief, Volg swears absolute loyalty to Irma, whom he refers to as his master.

Volg is the overall highest ranked of Irma's chocobo followers and the most dedicated, going so far as to call her "milady." Unlike the more recklessly spiteful Greeble or the blindly manipulated Peekaboo, Volg is a great deal more intelligent and competent. He even expresses mutual respect for Chocobo, proving himself to be the most honorable of the antagonists. He would later join forces with Chocobo to not only defeat Bebuzzu, but to save Irma from the monster's clutches. At the end of the game, he and Irma ride off together and the credits imply that among their stops is a visit to her abandoned home. 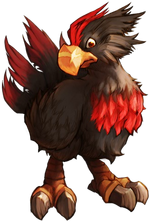 After stealing Timeless Power from Cid and Chocobo, Volg is sent to Lostime. However, Chocobo does not encounter him until later when he goes looking for Irma and finds her as Amouri. After Irma returns to normal, Volg hears the Bell of Oblivion and forgets part of his past. Chocobo recovers his memories about his first loss in battle and meeting with Irma.

A human version of Volg is the hero of Cid's first picture book The Wolf that Fell in Love. He is the leader of the second army in the kingdom of Barnad and is known as 'the Black Wolf'.

Volg is voiced by Travis Willingham in the English version of Final Fantasy Fables: Chocobo's Dungeon. He is voiced by Chris Tergliafera in Chocobo's Mystery Dungeon Every Buddy!.

Users can make their character appear as Volg from Maho to Shoujo to Go-nin no Yuusha.