A young black mage who is timid and unsure of himself. As he travels with Zidane, Vivi learns that he was the prototype of a series of black mages created as weapons, and he struggles to come to terms with the truth of his identity.

Vivi is a recruitable character in Final Fantasy Record Keeper. He is unlocked in Evil Forest on Classic in the storyline of Final Fantasy IX as the First Time Reward. In the global release, Vivi could also be recruited via the Princess of Alexandria - The Path to Escape Challenge Event in the Ice Cavern - Hidden passage on Classic as the First Time Reward. He was also issued in A Place to Call Home and Angel of Death.

Vivi stands out as an exceptional black mage, thanks to his high Magic stat, and is one of the first such characters with full mastery of his skillset. Magic itself comes at a very high premium, and so the player should set Vivi up with the strongest affordable spells to use him to full effect.

Vivi can use Black Magic abilities up to rarity rank 5.

After Vivi's level cap is increased he automatically gains the Record Materia, Rod Master, which when equipped deals bonus magic damage when a rod is equipped. His second Record Materia, Devotion, can be gained at any given time after battle provided that Vivi is present in the battle party. When equipped with Devotion, the user gains more Magic but at the at the cost of reducing Defense and Resistance. 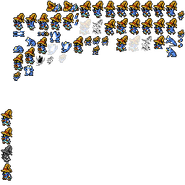 Icon for Doublecast Fira All.