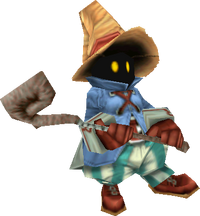 Vivi is a playable character in Final Fantasy IX. He is a black mage who wields staves in battle. He is physically weak and thus best kept in the back row. His special ability is Focus which increases his magic power, and his skillset is Blk Mag, which casts offensive magic. Vivi's Trance changes this to Dbl Blk, allowing him to cast two Blk Mag spells in one turn. When he is in the same party as Steiner, Steiner gains access to these spells through Swd Mag, at no cost to Vivi. Vivi also appears as a boss. His victory pose is to twirl his staff before coming to an attention pose. When Vivi is growing more depressed at Queen Brahne's use of black mages during their escape from Alexandria, he will not pose until after the party's first visit to Conde Petie.

Vivi learns abilities that enhance him as a mage, such as MP+20%, Half MP and Return Magic. His unique abilities are Reflect-Null to make his spells piercing, Reflectx2 that causes spells cast by Vivi to double in power when reflected off a target, and Mag Elem Null that renders all spells non-elemental.

The Focus command enhances Vivi's Magic Power. Vivi can stack the effect, but once the Magic stat reaches 99, it will not increase further. The effect lasts for the entire battle, even if KO'd.

Vivi's main ability is to use Black Magic and he is the only character in the game with the ability to do so. Vivi is one of the strongest black mages encountered, his powers rivaling even those of the Black Waltzes.

If Vivi and Steiner are in the party, Steiner can use Swd Mag together with Vivi during battle. This will not make Vivi lose his turn or expend MP.

Unlike in games past, where Black Mages equip rods or daggers, Vivi equips staves. His armor consists of mage robes and hoods, as well as lightweight vests and hats. Vivi begins equipped with Mage Staff, Leather Hat and a Leather Shirt. 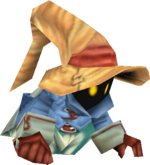 A mirrored Vivi can also be summoned by the Epitaph enemy through its Mirror ability. Like other mirror enemies, the Vivi will use regular attacks on others, but a 9999 attack on Vivi where he exclaims "I'm Vivi!".

Jump rope is a minigame the player can participate as Vivi in Alexandria at the beginning of the game by approaching the girls jumping rope to the left of the ticket booth. Later, the girls relocate to the bell tower. The minigame yields many rewards such as gil, rare cards, and a rare key item.

If both Quina and Vivi are in the party, and the player visits Quan's Dwelling after obtaining the Hilda Garde III, a unique scene triggers with Quina, Quale, Quan and Vivi. Vivi is excited to see his grandpa again. Afterwards, the player can look into the clock on the ledge to receive a pair of Running Shoes.