Vincent appears as an obtainable character.

Vincent appears as a playable DLC character, wearing his original Final Fantasy VII attire, and wields the Cerberus in battle.

He is a Speed and Spell oriented character. His Limit, Satan Slam, deals damage in proportion to his Magic.

Vincent appears as a playable character.

Vincent's sprite.
Add a photo to this gallery

Vincent is an ally and a summonable Legend depicted in his Dirge of Cerberus -Final Fantasy VII- outfit.

Chaos (UUR+).
Add a photo to this gallery

Chaos (UUR+).
Add a photo to this gallery

Vincent is a playable character who could initially be recruited via the Challenge Event A Brewing Nightmare, where he was the First Time Reward for completing the event's Sister Ray stage on the Classic difficulty track.

Vincent is mentioned in the Mirage Manual entry for Cerberus, with the note that he and his weapon of the same name are absent from the game.

Vincent appears in many cards. His cards are either earth or dark-elemental.

Vincent appears in a Triple Triad card in the version available via Final Fantasy Portal App. 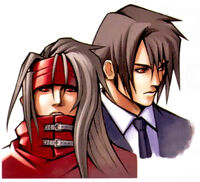 Vincent is a secret character unlocked by finishing the game with Tifa. He uses his claw and spiky boots to aid his martial arts, and can fire his gun to attack from a distance. He uses Ken's fighting style. The gun can be charged, and charged shots create images of his Limit Break alter egos with each successful hit. For his alternate costume, he dons a Turk uniform.

Vincent's fighting style is Ken's fighting style, Mishima-Style Fighting Karate, where he utilizes most of his moves, even his unique ability, but also gains some of Han's Taekwondo moves, such as Hunting Hawk and his Firecracker. Vincent's special attack has him to do three punches and an uppercut followed by a flurry of punches the last punch dealing enough to stun or knock down his opponent. His unique ability is to shoot his gun similar to Ken's lightning blasters from his arm gun, but his element is fire. During charge, he can shoot his opponent three times and he can scatter shot his opponent multiple times. His win animation is his victory pose from Final Fantasy VII.