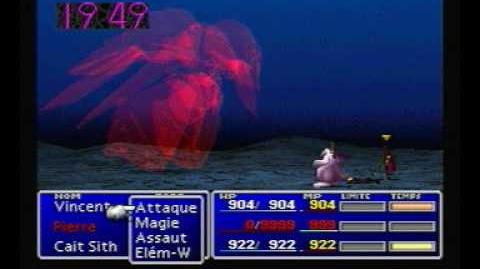 The Vincent Mug glitch is a glitch in Final Fantasy VII that involves Vincent using the Mug command. Whenever Vincent uses Mug, the next attack animation is skipped, be it the enemy's attack or the player party's. The damage is still calculated as normal, even if no damage numbers appear. The weapons that it works with are Shortbarrel, Winchester, Long Barrel R, Sniper CR, and Death Penalty.

When the glitch is triggered, the attack animation is skipped, and only the results are shown. For example, if the skipped animation is that of the Phoenix summon, the revived allies would instantly jump back to life; the only clues that Phoenix was even summoned would be that the summoner still loses MP, the enemy has taken damage, and the KO'ed allies have been revived.

The glitch can be exploited for competitive speed runs, but can be useful for casual players to alleviate tedium as well. For example, it allows the player to skip long summon animations, such as the Knights of the Round. This glitch can also skip boss death/post-fight scenes.