Guns
Vincent is a secret playable character in Final Fantasy VII. Vincent is a Gunner and wields various firearms. His special ability is to transform into monsters that augment his powers, but he loses control of his actions. His ultimate weapon, Death Penalty, deals more damage the more enemies Vincent kills and is found in the cave behind the waterfall.

Vincent can be recruited in the party in the Shinra Mansion. On a technical level, Vincent occupies the same party slot as Sephiroth does for the flashback. The game only properly updates the slot during the character naming screen, so he will not function correctly if this is bypassed when adding him to the party by non-standard means.

Vincent uses a variety of different pistols, revolvers, shotguns and rifles. Being a ranged fighter, he will do full damage with physical attacks from the back row. His unique Limit Break heals and transforms him, but the player loses control of him. His victory pose is to spin his gun a few times before returning it to its holster. He will not pose in his transformed state.

Vincent's default weapon is the Quicksilver pistol, which he carries in his official artwork. Vincent's guns have mediocre Attack power, but two of them have a 255% hit rate, meaning they will never miss, and all of his guns are long range. The 255% Accuracy makes Vincent a good choice for the Deathblow Materia, which inflicts double damage but has low Accuracy—the 255% hit rate can make up for this.

Vincent's ultimate weapon is the Death Penalty, whose strength increases with the number of enemies Vincent has killed. Due to an overflow glitch, with his ultimate weapon, Vincent is capable of killing even Emerald Weapon in one shot.

Vincent's Limit Breaks are different from the others'. He has only one Limit Break for each of the four levels, and when Vincent initiates a Limit Break, he turns into a berserk monster and stays that way until the battle is over, win or lose. When he shifts his form, Vincent's stats increase and his HP refills, but he cannot shift back at will. Thus, while his Limit Breaks can be powerful, they are risky. If Vincent is knocked out he will revert to his normal form.

The offensive properties of Elemental or Added Effect do not carry over to his Limit Break forms, perhaps because he's not using his weapon to attack. Defensive Materia set-ups continue to work. Vincent learns new Limit Breaks the fastest of all party members. Vincent is the only character to find both his ultimate weapon and Limit Break Level 4 in the same place: Lucrecia's Cave. 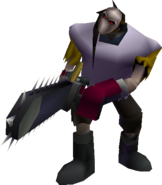 In the Shinra Mansion, the player must get the Mansion Key from the safe upstairs. The combination is RIGHT TO 36, LEFT TO 10, RIGHT TO 59, RIGHT TO 97; hints to where to find the codes are explained in a letter found near the entrance, but the player doesn't need to find the hints if they know the correct code.

Following the opening of the safe, a boss called Lost Number will appear. The key can be picked up from the safe after the battle and used to open the locked cellar in the basement. Inside, the player will find coffins, and one of them contains Vincent. The player must talk about Sephiroth when Vincent asks the party a question. When the coffin closes, the player must touch the coffin again and ask his name when Vincent poses another question. As the party leaves the cavern, Vincent will join.

It is possible to recruit Vincent with Tifa or Cid as party leader, which gives a slightly different dialogue, and even after Raid on Midgar, when the target of his hatred has already been killed. Vincent will still join the party, ready to exact his revenge.

In the PC version re-release acquiring Vincent earns the "Vincent" achievement. Recruiting him in the PlayStation 4 version earns the "Won't You Be My Valentine?" trophy.

After Cloud returns to the party after the Mideel events, the player can travel to Lucrecia's Cave for a unique quest when Vincent is in the party. Upon first entering the cave with Vincent, Lucrecia Crescent will appear and tell of the experiments through which Hojo had put her, Sephiroth, and Vincent in Shinra Mansion.

Afterwards, the player must exit and fight ten random encounters. Returning with Vincent in the party, the player can find his Limit Break manual and his ultimate weapon, Chaos and Death Penalty, respectively, at the back of the cave, which is otherwise empty.

When the party meets at the Gold Saucer's Ghost Square inn and discusses the next plan of action (after obtaining the Keystone), Cait Sith suggests that Cloud explain the overall reason behind their journey thus far, since he, Vincent (if he has been recruited at the time), and Cid were not part of the party at the start of the journey. Cid will agree, after which Vincent will chime in with his agreement as well. At the end of the meeting, Vincent will approach Cid and invite him to join him in returning to their rooms. However, Cid has fallen asleep (which he will do regardless of whether Vincent has been recruited by this time).

If Vincent is in the party at the "end of Part I scene", Vincent walks over to Aerith and looks at her. He goes to Cloud and looks at him, then silently walks away. The original PC version has a humorous graphics glitch that occurs if Vincent is in the party during this scene, where his character model is stuck with one leg extended out into the air. This glitch was fixed to the 2012 re-release.

Visiting the cave behind the waterfall near Nibelheim (on a submarine or colored Chocobo) with Vincent in the party starts a unique scene and explains some of his, Lucrecia's, Professor Hojo's, and Sephiroth's backstory.

Vincent has additional dialogue during the confrontation with Professor Hojo at the Sister Ray if he is in the party.

Other than the overflow glitch with Death Penalty, there are two other harmless glitches associated with Vincent: the Vincent Mug glitch, and a glitch that occurs only in the original PC-version if Vincent is in the party during the scene at the end of Part 1, where his character model is stuck with one leg extended into the air.

Vincent's Limit Break forms behave oddly under All Lucky 7s since he seems to revert to using his gun though there is no animation for it.