The Villagers are the townspeople of the aptly named Village in Final Fantasy Crystal Chronicles: Echoes of Time. They collectively act as the Hero's adoptive family.

Old and wizened, Aurdy is the leader of the Village. The only times the player hears his name is when Phelple and Ullz are talking after the mines, and also when the villagers suddenly disappear from the Village and Norschtalen wonders where everyone—including Aurdy—is. He will talk about the wheel falling down the hill, and Ullz will say he still remembers Aurdy's expression. Aurdy is assumed to be friends with Bachenn, though he can be seen to become frustrated with Bachenn's laziness.

Bachenn is a middle-aged Selkie man, the husband of Tratt and the father of Ullz. He is a slothful man, and can be found often sleeping on the tree stump near the water wheel.

Eryll is the youngest villager, who becomes infected with Crystal Sickness. She is Lian's younger sister.

Ilina is a teenage girl who lives in the same village as the Hero. She looks after Eryll when she develops Crystal Sickness and is one of the first to return to the village when the Hero starts collecting the crystal shards along with Lian, with whom she seems to have a relationship with.

Lian is a teenage boy who lives with his younger sister, Eryll, in the same village as the Hero. He becomes very concerned when his sister develops Crystal Sickness and wants her to rest even after she recovers. He, like the rest of the villagers, is revealed to have been killed by Larkeicus 2000 years ago. Lian also seems to have a relationship with Ilina.

Norschtalen is a young Yuke girl who desires to become Waltrill's apprentice. She can be scatterbrained at times, panicking for unruly reasons, but she is very bright. Her outbursts of giddiness most often lead to Waltrill's resent. She is the only villager besides the Hero and Sherlotta that are alive.

Phelple is a rather spoiled and bratty child, and is often able to get away with various pranks due to the meekness of his mother, Toumli. He is friends with Ullz, and together the two are the chief mischief-makers of the Village. He and Ullz are disciplined by Tratt after ruining a clothesline, and for some reason, Toumli voluntarily joins in, apparently for failing to control her child.

Sherlotta is a young Clavat girl with a mysterious connection to the crystals. She is known to take the form of a cat. Sherlotta also possesses a deep love for the Hero.

The mother of Phelple, Toumli was apparently a mercenary whom many men feared. However, she denies this fact when Tratt brings it up after they return to the village, stating that it was "all complete fiction". Toumli is shown being able to lift a cow, as well as other heavy objects without breaking a sweat. Though accompanied by her strength, Toumli is known to break out in crying fits, such as when Tratt scolds Ullz and Phelple after the clothesline incident.

Toumli also is seen once with a form of a lisp, saying her tongue was tired after staying up to perform the maintenance for the Hero's Coming of Age Ceremony. She gives hints about where the mini-boss' weak point is, though she is difficult to understand due to the altered lisp dialogue.

Tratt is a female Selkie who resides in the same forest as the Hero. She is the mother of Ullz and appears to be friends with the Lilty, Toumli.

Ullz is the son of Tratt and Bachenn. He is of Selkie ancestry. Ullz is friends with Phelple, and the two of them are the village's chief mischief-makers. It is later revealed that they are the ones who caused trouble with the laundry.

Waltrill is a wise Yuke and an avid practitioner of magic. He was the the master librarian of the Library in Town before opting for a more peaceful life in the Forest. However, he forgot to return the master Library key before giving up his post.

Waltrill takes care of Norschtalen, a young female Yuke he found lost in the forest. Norschtalen becomes his apprentice, and constantly begs her teacher to instruct her in advanced magic, a request he constantly refuses. Despite his stoic demeanor, he genuinely cares for Norschtalen, and confides to the Hero that he is eager to teach her when she grows older. 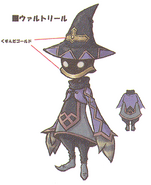