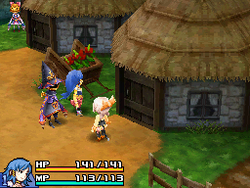 The Village (村, Mura?) is an area in Final Fantasy Crystal Chronicles: Echoes of Time. It is the home of the Hero.

The Village is where the story begins, with the Hero having an unusual dream the night of his/her sixteenth birthday. The following day, s/he enters the Forest that lies directly behind the Village as a part of the rite of passage into adulthood.

The Village itself was constructed after the old Village (now called the Ruined Village) was destroyed by Larkeicus two thousand years ago.

The village seen from afar.

Village on the world map.

Some of the villagers.
Add a photo to this gallery