Land outside:
Sea outside:

The Vikings' Cove is the base of operations for a group of vikings in Final Fantasy III. It is located on the Floating Continent, in the Myraluka Valley beyond Tozus, and south of the Nepto Temple.

The inn here charges 40 gil and there is a Revive Wellspring in a secret passage. There is a working Cannon inside of the Vikings cave that can be fired, but does not affect gameplay.

As the Warriors of the Light leave the Tozus Tunnel, they find themselves at the Myraluka Valley. There they find a village of Vikings inside a cave. There they learn that the Nepto Dragon has gone rampart and try to search for its cause, being rewarded with the ship Enterprise for discovering it. They thus head for the Nepto Temple.

After restoring order in the shrine, they return to the Vikings' Cove to alert the Vikings that all's well. They then leave to explore the sea.

Note: Nepto Dragon will only appear if the player attempts to go through the small channel to the ocean before the plot event in Nepto Temple.

Similar to Kazus, the "The Djinn's Curse" is played, followed by "Return of the Warriors" when the Nepto Dragon's rage is quelled. 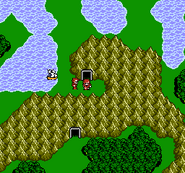 Viking's Base on the World Map (NES).

[view · edit · purge]Vikings were Norse seafarers who raided and traded from their Scandinavian homelands across wide areas of northern and central Europe, European Russia, Mediterranean littoral, North Africa, the Middle East and Central Asia, North Atlantic islands and as far as the north-eastern coast of North America during the late 8th to late 11th centuries. The term is commonly extended to the inhabitants of Viking home communities during what has become known as the Viking Age.