An axe with high ATK only allowed to be wielded by head pirates. The outlaws of the seas known as pirates aren't as lawless as they seem, and actually adhere very strictly to the pirate code. When one becomes the leader of pirates they receive this axe along with the responsibility of watching over their henchmen, and ruthlessly punishing any who break the pirate code.

Viking Axe (バイキングアクス, Baikingu Akusu?) is a recurring weapon in the series. It is often a mid to high-ranked axe, generally used by heavy melee jobs such as Fighter.

An axe once wielded by vikings.

Viking Axe is a mid-ranked axe used by Warriors, Ninjas, and Knights. It provides 25 Attack, 10 Accuracy, and -10 Evasion, and only appears in the Dawn of Souls and 20th Anniversary remakes. It is found in Whisperwind Cove.

Viking Axe is the weakest axe, providing only 33 Attack. It can be found in the Sunken Cave and can only be used by the Onion Knight, Viking, and Warrior Job classes.

Viking Axe is a mid-level one-handed axe, sometimes dropped from Girtabs in Toraimarai Canal. It can be equipped at level 48 by Warriors, Dark Knights, Beastmasters, and Rangers. It has damage 36 and delay 276. In addition, it has a +10 bonus to accuracy but a -10 penalty to evasion.

The Viking Axe is a weapon exclusive to Garland equipped at level 92. It provides +65 Attack, -2 Defense, and EX Force Absorption +20%. It can be obtained by trading 29,570 gil, an Ogrekiller, Blood-Darkened Bone x5, and Strength Crystal x3.

The Viking Axe is a level 90 weapon exclusive to Garland. Its Attack rating is unchanged, but instead of reducing Defense, it lowers base Bravery by 70, and now increases EX Force Absorption by 7%. It can be obtained by trading 158,000 gil, an Ogrekiller, an Electrum, and Stalwart's Dream x5.

Viking Axe is an Axe, obtained as Mercedes's Trust Master. It provides 125 ATK and is Water-elemental.

An unrefined but practical axe from battles onboard ships. A favorite of pirates, its dual axe heads make it easy to wield, even in chaotic battles. It deals the most damage against aquatic monsters. 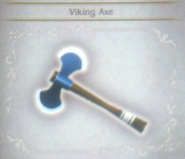 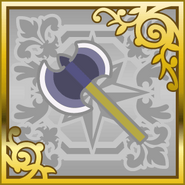 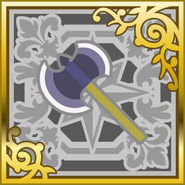 [view · edit · purge]Vikings were Norse seafarers who raided and traded from their Scandinavian homelands across wide areas of northern and central Europe, European Russia, Mediterranean littoral, North Africa, the Middle East and Central Asia, North Atlantic islands and as far as the north-eastern coast of North America during the late 8th to late 11th centuries. The term is commonly extended to the inhabitants of Viking home communities during what has become known as the Viking Age.