Look at his hands! They're so tiny!

Vidina is Lulu and Wakka's son, born during the events of Final Fantasy X-2. He appears at the game's last chapter, when the Gullwings return to Besaid for the final time. Vidina has red hair like his father. The red "pom-pom" on his carrying cloth resembles the cranial ornamentation of moogles.[note 1]

Around nine months before the events of Final Fantasy X-2, Lulu becomes pregnant with Wakka's child. By the time Yuna returns to Besaid, the child she carries is "to be born at any time now".[note 2] Lulu appears patient and excited about the event, but Wakka has trouble coming to terms with his new role as he never had parents himself. Additionally, his mind is somewhat focused on searching for a sphere of his parents (As a child, Chappu, his brother, had bragged to him about finding it). Beclem, who has been sent to train the Besaid Aurochs as members of the Youth League, clashes with Wakka on numerous occasions.

Later in Chapter 5, the child is born, but Wakka has trouble thinking of a name for him. When Yuna, Rikku, and Paine go to the Besaid dock, they find Beclem about to leave. He asks if Wakka has found a name, and gives them the War Buddy Sphere. They return to the village, and encounter Wakka on the road, saying that he wanted to say farewell to Beclem, but they say he has gone. Yuna gives him the sphere to watch. It shows Chappu, who admits he never found a sphere of their parents. Realizing the truth, Wakka asks the group if they will stay until nightfall.

During the night, Wakka calls a meeting and introduces the village the newest member: his son. Datto comments on how they met him during the day and Jassu jokes about the meeting as "a brainstorming session" which would determine baby's name, but Wakka's disperses the idea and announces the name to be "Vidina". Yuna congratulates Wakka who says he always just be Wakka. Later that night Wakka apologizes to Lulu for taking so long to think of a name, but Lulu says it was worth the wait, and she had faith in him.

Besaid Aurochs players are enamored with Wakka's son and skip the blitzball season to help Wakka and Lulu look after him, letting the Gullwings play in their place.

If the player gets the secret ending where Tidus is resurrected, Vidina is seen on the beach with Lulu. 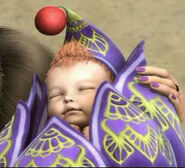 Vidina is Al Bhed for "future," and for Japanese, "Inami" translates to mirai (未来, mirai?, lit. future), signifying Wakka's peace and acceptance with the Al Bhed.