For real, though, we need to talk victory poses. Something coordinated for the live, on-camera finish!

Whenever the player wins a battle, the party members will strike a victory pose (勝利のポーズ, shōri no pōzu?) (also known as victory dance). In the earlier games, these were generic and universal across all characters, but as the series progressed, the characters began to have unique victory poses, with some even changing as the story progresses.

In the NES version, characters simply use their spell-casting poses alternating with their standing poses. In the cases of non-casters, unique poses were created to fill the blank. In later releases, the victory poses are universal across the jobs. The characters simply raise their arms a few times in time with the "Victory Fanfare".

Most characters raise their arms a few times, as casting poses were not diversified. Guy, Ricard, and Josef only raise one arm. The party now runs across the battlefield to exit, indicating the enemies were blocking the way. Somewhat humorously, unconscious or petrified party members will be left behind as the rest of the party leaves the screen, and party members afflicted with Toad or Mini will move more slowly than the rest of the party.

In the original NES version, casting poses were doubled up with victory poses and made unique for most classes.

In the 3D remakes, the characters stand in a loosely formed line, and each has a unique action when a level or job level is gained.

Most characters repeatedly raise either one or both hands into the air.

In the 3D remakes, each character has a unique victory pose.

This gallery is incomplete and requires Working Yang added. You can help the Final Fantasy Wiki by uploading images.

All characters repeatedly raise both hands into the air.

In the Wii and PSP versions, all characters repeatedly raise both hands into the air.

In the 3D remakes, the recurring characters' poses are essentially the same from the 3D remake of Final Fantasy IV with their facial expressions, but new playable characters have their own victory poses:

At the start of the battle, characters have their own unique "intro poses", being variations on them entering a battle, making this and Final Fantasy VIII the only games to do this. After the battle, party members spin around once quickly, then start pumping their fists into the air in a victory dance.

Characters will not perform a victory dance in the following battles: against Vargas, first battle with Ultros, Cyan during the Siege of Doma, any battles within the Serpent Trench, on the rafters above the stage in the Opera House, the battles during the mine cart sequence, the Battle over the Floating Continent, while escaping from the Floating Continent, the first three Humbaba battles, during the sequences of the Statue of the Gods, and finally the final boss.

Locke as a merchant

Each party member has a unique victory pose they perform if they survive the battle, although there are battles where the party won't pose.

Vincent performs his Final Fantasy VII victory pose with an extra spin. He only performs the pose during certain scenes, or after completing an Extra Mission.

In Extra Missions where Cait Sith is used, his victory pose is a backflip.

Zack's victory pose differs depending on how much HP and what status he has at the end of the battle:

Cloud performed his trademark victory pose of twirling the Buster Sword before placing it behind his back. This was seen in the announcement trailer.

When winning all battles in either the Corneo Colosseum or Shinra Combat Simulator, the party will reenact slightly modified variations of their victory poses from the original game.

Cloud and Tifa also have two victory poses and one defeat pose for competing in the Wall Market gym squats and pull-ups challenges, respectively.

The party will perform victory poses after a winning battle. The pose the party members strike depend on the dressphere they currently have equipped, and each member has unique poses for each dress. The party will also exclaim victory quotes upon winning the battle, depending on the part of the story, which dressphere they have on, and the condition they win the battle in.

The victory emote allows players to do a simple victory pose, in which the character raises their weapon in the air.

After defeating a mini-boss or a non-storyline boss, the current surviving party members, including guests, perform their victory poses. The party stands in a formation—depending on how many have survived the battle—and the camera pans across each of them on the Congratulations screen.

The pose they perform is either a weaponless pose or specific to the weapon type they are holding, including if they fight barehanded. Each character has two weaponless poses, each performed with a probability of 1/6. There are also special cases where a character will only do their weaponless poses after defeating certain bosses.

When a battle is won all characters turn and face the camera, then perform their respective pose. In some missions, victory poses are not used. 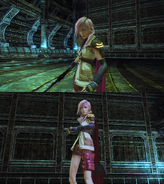 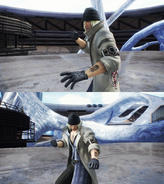 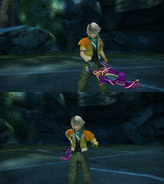 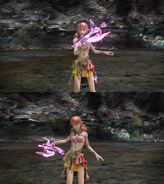 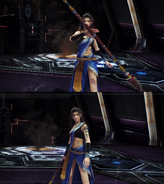 Serah does not perform her victory pose in the Void Beyond during episode 5 until she reunites with Noel in A Dying World and examines the Oracle Drive because Mog is invisible. 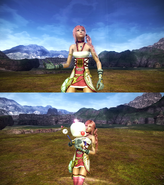 Lightning is the only playable character, and each pose is unique for each type of garb used to deliver the final blow on an enemy.

After the party finishes an instanced dungeon, a scene showing them using the "/joy" emote as a victory pose plays, first showing the other party members posing, then focusing on the player's character, who poses while "Duty Complete" appears on screen.

In some duties, an alternate scene is used. In Tam-Tara Deepcrot (Hard) and The Final Coil of Bahamut - Turn 3, a customized sad emote is played as neither battle had a desired outcome. In the Wanderer's Palace (Hard), the pose is interrupted by a group of revenge-driven Tonberries attacking the boss Manxome Molaa Ja Ja. In Alexander - The Burden of the Son, the party will first turn away from the boss before doing the emote as it explodes behind them, a gag on the common action movie trope of protagonists being unfazed by explosions behind them. In the normal version Eden's Verse: Refulgence, neither the party members nor player character will do a victory pose. Instead it will show Gaia nearly collapsing from exhaustion after delaying the Flood of Light in a battle against Shiva.

In the Ultimate Fight trailer, Yda attempts to make a victory pose after summoning the Scions of the Seventh Dawn to defeat Livia sas Junius but is beaten to the punch by Minfilia.

In the 3.2 patch, the "Victory" emote was added, which depending on the player's class/job at the time will make them replicate the victory pose of one of several Final Fantasy characters (ex. when used as a Dark Knight, the character will mimic Cloud's victory pose from Final Fantasy VII).

Although there is no direct "victory pose", party members have certain animations and conversations they do after a battle, depending on how well the player did and the enemies defeated. Guest characters join in when present.

When accessing equipment shops, 2D sprites in the party's likeness signal if they can use the equipment. The sprites perform the familiar victory pose from Nintendo era Final Fantasy games.

Though the victory poses vary among them, the present leading member of Class Zero usually utters "Mission Complete" in victory.

After each battle the characters will run to form a line and strike their respective pose:

The main characters simply raising their arms in the air repeatedly.

Characters perform the classic victory pose of raising their hands up.

Humanoid characters raise their hands up and down. Red XIII has a unique victory pose where he performs a howl. Sazh's chocobo chick, though just a pixel wide, will pop from his afro as he poses.

Most characters will perform a brief pose in which they brandish their weapons after battle, though this act is not often noticed in the face of large text such as "YOU WON" and "QUEST CLEARED".

Party members perform victory poses after a winning battle. Lann and Reynn have two victory poses each, depending on whether either of them appear as a Jiant or Lilikin in battle.

The player can view the victory poses of Mirages within the Mirage Manual (with the exception of Mega Mirages). S-sized Mirages that accompany the player on the field will play their victory pose after detecting a Treasure Trove in a dungeon.

In The Coliseum, the lead character will play their victory pose after winning a match. In the Maxima version, Hauyn does not have a unique victory pose, simply standing still.

Each Final Fantasy VII character will perform their victory pose upon winning their match against their opponents while playing the victory fanfare. Cloud, Tifa, Yuffie, Vincent, and Sephiroth will make their iconic victory pose from their game while Zack uses the same victory pose as Cloud. 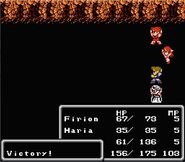 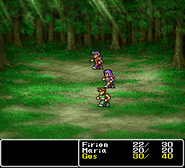 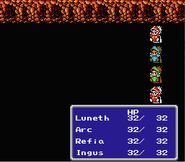 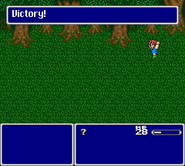 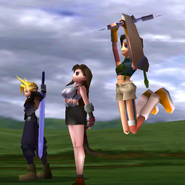